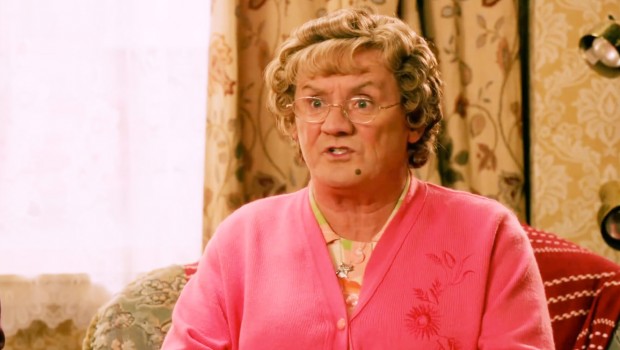 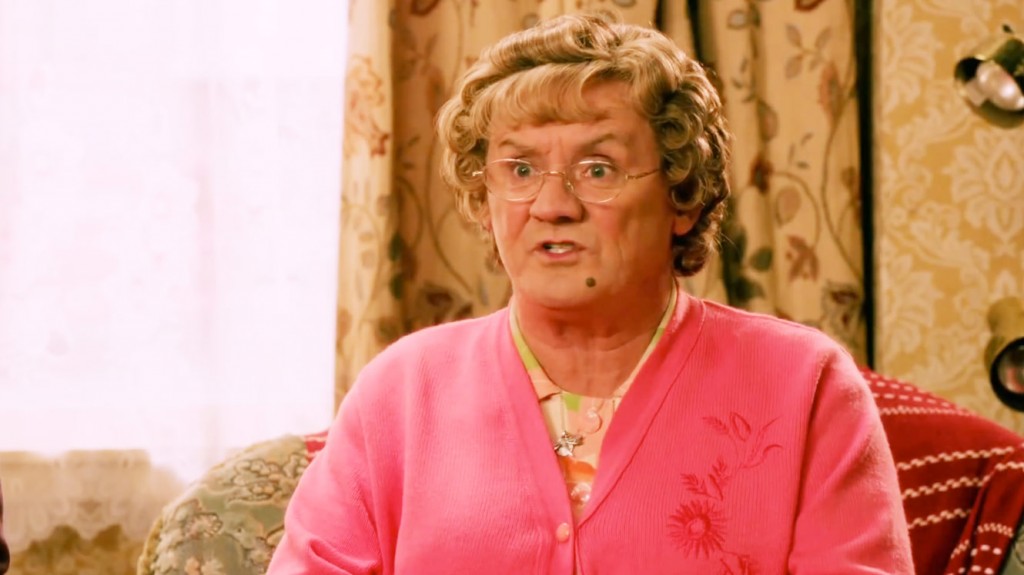 It is hard to imagine a less fashionable sitcom than Mrs. Brown’s Boys, Brendan O’Carroll’s cash-spewing granny-drag comedy in which he plays the foul-mouthed matriarch at its centre. Based on the act O’Carroll and various family members developed on stage over years of touring, and co-developed by RTE and BBC Scotland, the show is powered by the comic appeal of a stocky man in a dinner lady’s vest pottering about sets, mugging for the audience, laughing at his own jokes and spitting out ‘fecks’ like punctuation. Trading on shoe-worn sitcom set-ups, Mammy-knows-best nostalgia and gags so broad a rookie stormtrooper could hit them, it is the sitcom equivalent of the internet wayback machine. It’s like waking up in a mad parallel universe where hats wear people, Graham Lineham was never born, and that fake sitcom from Extras is the most popular thing on the box.

If you haven’t seen the show, it’s pretty much what you think it is. In one scene Mrs. Brown does a hip hop shuffle and sys ‘west side!’. In another she mistakes a wake for a hen party and bursts in with a giant pink inflatable dick, singing ‘sex bomb’. In terms of comic sophistication, it’s basically a human-sized Punch and Judy show. Only Judy’s a dude. And yet, it is weirdly difficult to hate. The feeling it inspires is closer to a stunned bafflement, the structural frisson of witnessing something that should not, under normal circumstances, exist.

To be fair, that’s because it is less a sitcom than a thinly-plotted town-hall variety show, accidentally caught on camera for broadcast. Despite the hate arms race the show inspires in professional critical circles, it’s not entirely without appeal. With its loose respect for the fourth wall, and its bloopers-and-all editing style, the format has a relaxed theatricality, offering a vicariously charming window into a situation in which laughing at this kind of thing could become a possibility. Whatever you think of Brendan O’Carroll, he is (and this is meant without an ounce of judgement) a skilful panto performer.

If this physically theatrical atmosphere makes the show tolerable in a harmless sort of way, its absence from Mrs. Brown’s Boys D’Movie, the inevitable feature-length upgrade, finally, totally, ring-the-bell unwatchable. Mimicking the set-up established by early-Noughties movie transitions like Ali G Indahouse, the film pastes its comic creation into an underdog story in which she rallies the local community against the machinations of hostile authority figures. Here, the enemy is a small political-corporate cabal plotting to put Mrs. Brown’s stall out of business and clear the street for a lucrative property development. Landed unexpectedly with a substantial tax bill, Mrs. Brown has to take the revenue office to court and, with the help of family and friends, disprove the debt’s legitimacy and save her plucky stall.

Without the supporting formal furniture of the audience laugh track and tactile studio sets, O’Carroll’s shtick just lies up there on the big screen, twitching and bleeding out for ninety minutes. Little work appears to have gone into the architectural question of converting the twenty two-minute show to a feature-length copy. The rationale seems to have been more of the same broad, formless routines as before, with gags including old people swearing, old people talking dirty and a hysterical gay man in a mankini, peppered with ‘isn’t this mad?’ winking at the multiplex audience. A particular low point in the ample padding is an opening musical set-piece, which displays all the razz-ma-tazz and polish of a ‘visit Lisburn’ advert. As a result, the film is filled with gaping comic dead zones, where very little, funny or otherwise, is actually going on.

A gross side-effect of the formal transition and the thin, barrel-dunking material is the exposure of the mean-spirited parochialism of O’Carroll’s act. ‘He said he’s dead, not retarded!’ goes one punch line. Also, Mrs. Brown’s lawyer warns that he has a problem with Tourette’s, because, hey, it was such a laugh when that Big Brother fella couldn’t stop saying ‘piss’, before he went all homeless and self-harmy. Elsewhere, in a doubly appalling moment, O’Carroll puts on a scrunched-up brown-face for his ninja instructor character and calls a bearded man ‘Mr.Taliban’. The Chinaman get-up doesn’t even have a Ming-style beard – even the racist hackery is half-assed. Cultural insensitivity is one thing. Comic insensitivity is unforgivable.

The Chubby Brown-isms make it extra difficult to buy the film’s insistence on Mrs. Brown as a ‘salt of the earth’ every(wo)man worth rooting for. The franchise has always had a sympathetic ear for class, but when one of the Brown daughters (O’Carroll’s real-life partner Jennifer Gibney) closes the third act with an earnest panegyric on the virtues of the ‘authentic’ working-class market over cosmopolitan Dublin’s financial cathedrals and trendy nightclubs, it’s all just too much.

This is not simply because it’s a cynical, cack-handed grab for our affection after squandering it with persistently sloppy craftsmanship. It’s also because it reads like a coded justification for this sloppiness, mirroring O’Carroll’s publicised argument for his sitcom as a populist alternative for demographics left behind by modern comedy’s self-conscious cleverness, where negative reviews like this, in a self-defeating loop, only reaffirm the show’s earnest populism. But lack of effort is not the same as lack of pretention. Mrs. Brown’s Boys D’Movie is not comedy for “the people”. It is comedy for the people you don’t really know that well, or care enough to get to know, so you throw them any old shite come Christmas time. Please. Please. No D’Sequel. Conor Smyth