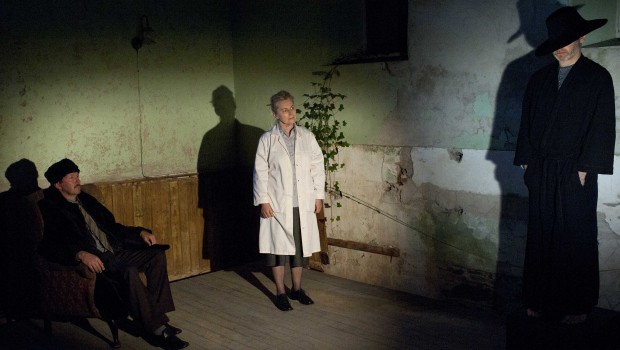 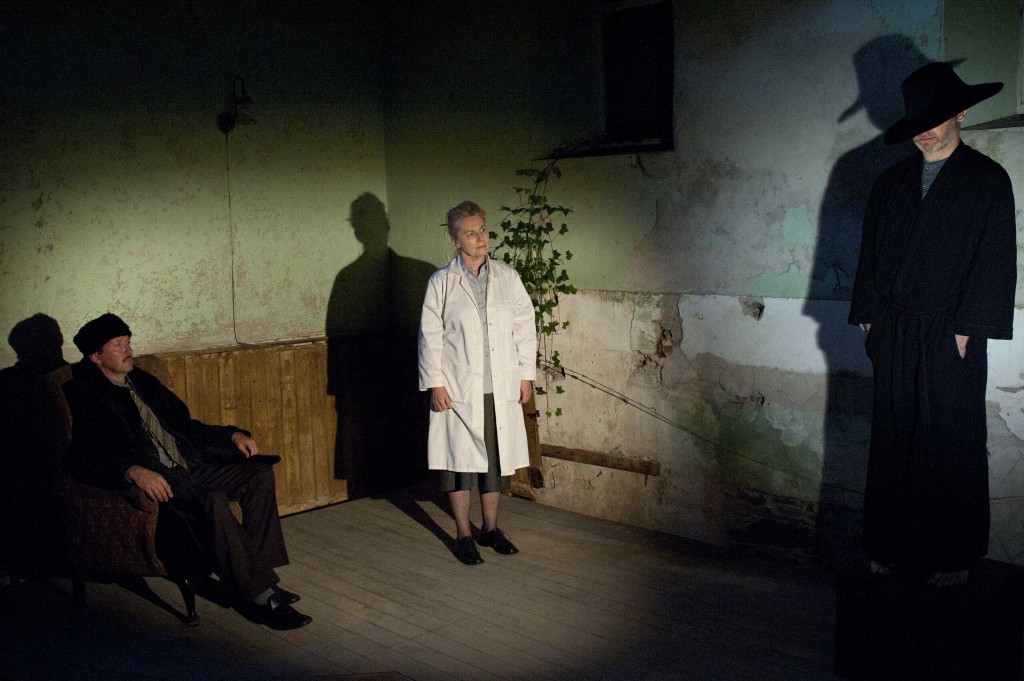 It seemed certain that somebody would let the cat out of the bag. A tongue would slip and the secret would surely be out. The mystery surrounding the location of the Ceithleann Island Theatre Company’s performances of Samuel Beckett’s Catastrophe was an imaginative programming touch of the Happy Days Enniskillen International Beckett Festival and a great publicity generator.

Despite two performances every day bar one throughout the marathon eleven-day festival, nobody spilled the beans. On this day, the bus routinely picks up about fifty people from Enniskillen Castle and heads out into the wilds of the Fermanagh countryside – destination unknown.

Written in French in 1982, Catastrophe is one of Beckett’s shortest plays, with a typical performance clocking in at around ten minutes. It’s widely considered to be one of the Irish playwright’s most overtly political works, largely due to the fact that Beckett dedicated it the imprisoned Czech playwright Vaclav Havel.

Havel was serving a four and a half year sentence for what the Communist government of Czechoslovakia deemed subversive actions – that’s to say, writing. The dissident playwright’s imprisonment prompted the International Association for the Defense of Artists to invite a number of artists to show solidarity with Havel. Beckett responded by writing Catastrophe, which premiered at the Avignon festival in July 1982 as part of Une Nuit pour Václav Havel. Making his directorial Beckett debut, Adrian Dunbar told me prior to the festival that Catastrophe is an unusual Beckett play in one important respect: “It was written for the festival in Avignon so it was a play prompted by others and it was his response to that prompting. In that sense it’s not something that sprang organically from his thoughts although it was and is a piece that you can absolutely imagine him writing without prompting.”

In Catastrophe, a theatre rehearsal is in progress. It’s the final scene. The Protagonist stands immobile and utterly passive on a wooden plinth as The Assistant repeatedly alters his stance and clothing on the curt orders of The Director. As a response to Havel’s imprisonment in the dark days of the Cold War, Beckett’s metaphor may seem obvious at first, but as actor Frank McCusker (The Director) relates, the metaphor has wider application: “You can see that it does, very succinctly describe the control of power that a State can have but also that one individual can have over another if there’s a pecking order in place.”

Who knows what degree of tyranny director Dunbar unleashed on fellow Fermanagh actors McCusker (The Director), Orla Charlton (The Assistant) and Dylan Quinn (The Protagonist) during rehearsals for this play within a play? Nobody was giving anything away.

The bus winds its way through the drumlins and mist-covered fields. The bucolic setting, however, belies somber stirrings on a strange day. In one Fermanagh town Israeli flags fly alongside Union Jacks. In another, Palestinian flags are carried at a parade to commemorate the 1981 hunger strikes. In the center of Enniskillen a convoy of tractors drives through the streets in protest at local fracking. Tyranny, it seems, means different things to different people.

Twenty minutes later the bus empties its passengers out onto the road beside a small, weather-worn, derelict-looking building. What was once Pubble Church stands beside a neglected graveyard. The gravestones date back to the early 1700s but the site has been a burial ground for over a thousand years. Headstones carry mortality symbols – skull and crossbones, coffins, bells and hourglasses. St. Patrick – who certainly got around – is believed to have preached to a crowd at this spot.

The last burial here was in the 1930s and the church closed its doors in the 1960s. Now they are open again for Samuel Beckett. The people slip silently into the pews on either side of the short aisle. On the small stage where the pulpit once stood The Assistant stands, impassively observing The Protagonist on his plinth. Long vines have forced their way through the boarded up windows. There are holes in the wooden ceiling and the walls are fractured and blistered. Heavy footfalls – ominous in the former church – announce the arrival of The Director. He’s wearing a long coat and a Russian-style toque. Taking up position in the armchair he begins to order the Assistant to make changes to The Protagonist’s clothing and posture. She removes his cloak and hat, takes his hands from the gown’s pockets, unclenches his fists and clasps his hands together. The Director, cigar in hand, irritably orders The Assistant to speed it up. The obedient Assistant is mechanical in her responses to the orders, but shows some compassion: “He’s shivering,” she says. “Bless his heart”, comes the unfeeling response from The Director. The prolonged humiliation of The Protagonist conjures mental images of the prisoner abuse in Abu Ghraib. 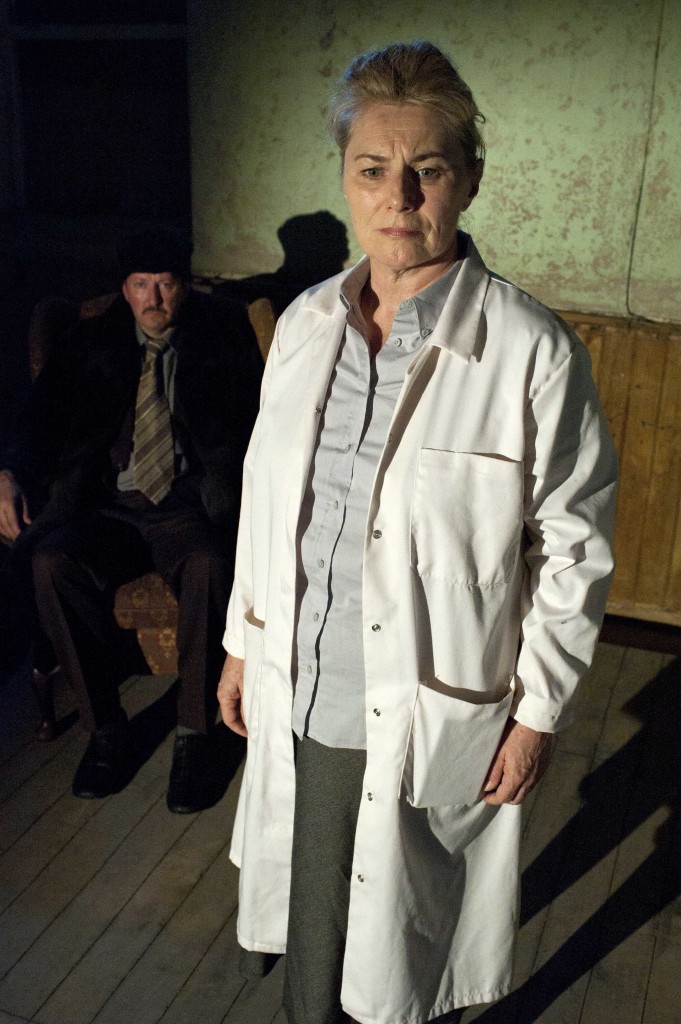 The Director rises from his armchair and walks to the back of the room to see how it looks. The Assistant eases into the vacated armchair and immediately springs to her feet. A little manically, she wipes the seat and back of the armchair with a rag before sitting down again. In this moment, The Assistant is also seen to some degree as a victim. Further instructions follow: “Could do with more nudity,” grunts The Director.

The lights come up and McCusker, Charlton and Quinn take their bows to applause before exiting the former church. Following his release from prison Havel corresponded with Beckett, thanking him and declaring that Catastrophe had been a source of joy and comfort during his years of incarceration. Catastrophe, for all its dark trappings, conveys compassion and humanity.

Dunbar’s striking directorial debut of Beckett’s play captured this essence – the stoic spirit of Beckett – and will be remembered as an emotive production of brooding intensity. Ian Patterson