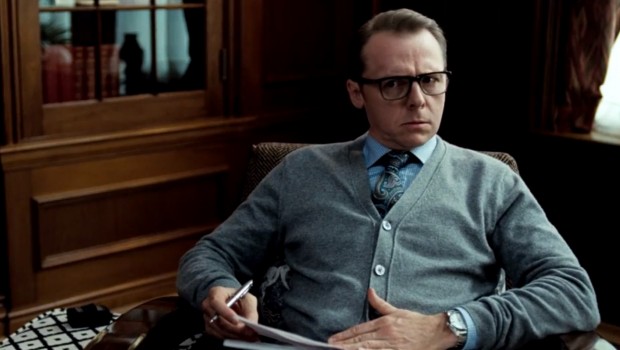 Hector and the Search for Happiness

Soon into Hector and the Search for Happiness, the baffling new leading man vehicle for Simon Pegg from director Peter Chelsom (The Hannah Montana Movie), I realised why the ‘dramedic’ inertia felt so familiar. Hector has much in common with last year’s The Secret Life of Walter Mitty, a Ben Stiller film which was remarkable for recreating perfectly in cinematic form the polished emptiness of a high-end credit card commercial. Both are adaptations of a literary work (here, a popular 2002 novel by Francois Lelord), both use a well-known comic actor for a slightly straighter role, and both are about a frustrated middle-class professional who breaks out of his humdrum routine and goes on an international journey of self-discovery. Both films also tell stories which are totally, maddeningly phoney.

The script, which Helsom co-wrote with Maria von Heland and Tinker Lindsay, quickly lays out the recognisable setup. Pegg is Hector, a London psychiatrist with a neat, predictable life. He tries to care as best he can for the variously eccentric clients that come through his doors, flies model planes on his time off and shares a clinical apartment with long-term girlfriend Clara (Rosamund Pike). She, inevitably, works in marketing. Finally tired of the oppressive sameness of his existence, and feeling fraudulent for treating others’ unhappiness when he himself has a stale internal emotional life, he decides to go on a trip to discover the secret to happiness.

The film name-checks the Tintin comics several times, including when a colleague urges Hector to ‘follow his inner Tintin’. Clearly, Georges Rami’s classic comic adventurer is meant to function as an archetype of carefree boyhood exploration – a feeling that adulthood has deprived Hector of, and he now finds that he must reclaim. (The opening dream sequence, in which Hector and a dog companion are flying a mid-century bi-plane and are surprise-attacked by a beardy European-looking thug, feels like a typical Tintin exploit.) But the invocation of the blank-faced Belgium reporter casts an unintentionally unpleasant shadow over Hector’s jet-setting narrative.

The film strays uncomfortably close to the comics’ sometimes paternalistic and patronising attitude towards foreign cultures (calcified in the notorious Tintin in the Congo). Every exotic individual Hector encounters – Stellan Skarsgard’s gruff businessman, a Chinese prostitute, Jean Reno’s gangster, a cheery, wise old Buddhist, various anonymous African women and even his old flame (Toni Collette) – feels like a cardboard person whose sole purpose is to impart home-spun Life Lessons to this affluent white Everyman. After getting released from the clutches of an African crime lord, and feeling alive for maybe the first time he can remember, Hector runs back to the local village laughing and whooping, and starts dancing with black babies to a high-tempo indie backing track. It’s stunningly misjudged. This might be Simon Pegg’s Eat Pray Love.

Hector and the Search for Happiness champions the importance of happiness to its protagonist and audience, but treats the subject with the glib frivolity of an ‘uplifting’ Facebook macro image. The pan-national collection of supporting characters offer Hector most banal bites of wisdom possible: happiness is being loved for who you are, happiness is not the same as avoiding unhappiness etc. etc. Nobody talks like a real person. Every interaction feels drearily staged, an artificiality only reemphasized by the cheap stylistic tricks designed to provoke the superficial centres of the brain, like the mood-machine Hector gets hooked up to in the implausible finale. The noncommittal soundtrack, the ‘crazy night’ montages and the ‘flights of fancy’ animated segues all seem like desperate attempts to inject personality and energy into an essentially sterile experience. There is a mirror to this in the subtle insistence upon Hector’s character as a lovable eccentric (Clara mentions how ‘quirky’ her friends think he is) despite the deeply conformist nature of his first-world discontent and eventual epiphanies. But hey, he wears a bow-tie on the poster!

With a perverted inversion, the longer the film twittered on inanely about happiness, the sourer my mood became. By the time Hector figured out the secret to happiness, I had long since descended into a deep, Hamletian melancholy. The ‘secret’ itself is such a shrug that I had to strain to recall it – something about everyone having a duty to be happy, or happiness being a thing that’s in front of you all along…? I’m not sure. Hector and the Search for Happiness is a contrived mess but it’s also another example of the dangerously shallow thinking peddled by the happiness industry’s pop cultural subsidiaries. Happiness and its opposite are complex matters which demand a minimum level of intellectual care, or at least some formal honesty – not this backpacker fantasy-fulfillment fakeness. Depressing stuff. Conor Smyth

Hector and the Search for Happiness is out in cinemas tomorrow, August 15