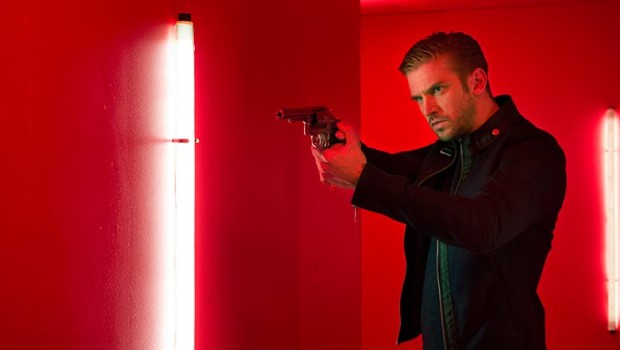 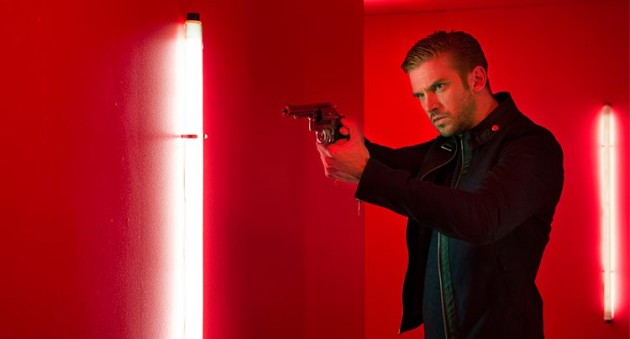 Interrupting the end-of-summer plainness like an ice bucket over the head is The Guest, a fun, nasty little slice of nuclear family devastation. It’s a tight, black domestic thriller from the seasoned horror partnership of Adam Winberg and Simon Barrett. Like the duo’s previous film, the rudimentary but spirited slasher You’re Next, it’s a genre piece about home invasion and family dysfunction. Here the threat isn’t a gang of animal-mask mercenaries, but a wolf in ship’s clothing. If the sheep shopped at Abercrombie and Finch.

The Peterson family, still reeling from the death of son/brother Caleb in the Afghanistan conflict, are visited by an eerily polite young man calling himself David (Downton Abbey’s Dan Stevens), who claims to be an old army friend of the deceased who promised to check in on his family should be worst happen. The family is reticent but eventually thrilled to have someone to fill the void. Stevens is perfect as the menacing boy next door, with his gem-blue eyes and rock-hard abs. He moves and speaks with an authoritative sparseness, his mouth hooked in a permanent semi-smirk. His quick visit stretches into a days-long residence. He teaches Caleb’s timid brother (Brendan Meyer) how to fight back against school bullies (‘just burn their house to be ground with their families in it’ he deadpans), shoots the shit with the frustrated salaryman father (Leland Orser) and sweet-talks the sceptical sister (Maika Monroe). But something seems a bit off about the household’s newest member. He only carries cash, he bursts into super-soldier moves and his story doesn’t check out. Turns out they’re bunking with a psychotic Steve Rogers.

From the lurid opening titles, the film places itself as a revival of the late ‘70s/early ‘80s genre grunge aesthetic (obviously John Carpenter is the first to come to mind). It’s everywhere: the editing, over-the-top sound hooks and pulsing synth backing tracks. It’s brash and self-aware, and sly funny, with a satirical eye on our deference towards masculine confidence. The young brother knows that David is a rat, but he doesn’t care, because to a teenage misfit nothing is more thrilling than badass jock vengeance. (‘He called me a faggot so I hit him in the jaw with a piece of plywood.’ ‘Awesome.’)

The film is very basic in plotting and character, and doesn’t have the staying power of some of the films it echoes stylistically, but it zips along. Adam Wingard has been in the horror circuit for a while now, making shorts and features and contributing to anthologies like V/H/S and The ABCs of Death, so he knows his way around a bit of schlock. The final showdown, located in a Halloween-decorated school gym, is a silly and colourful mashup of familiar tropes like the Blonde Girl and Unstoppable Robotic Killer. What a blast.  Conor Smyth