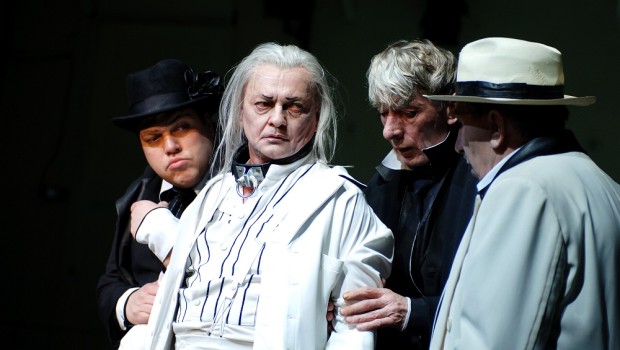 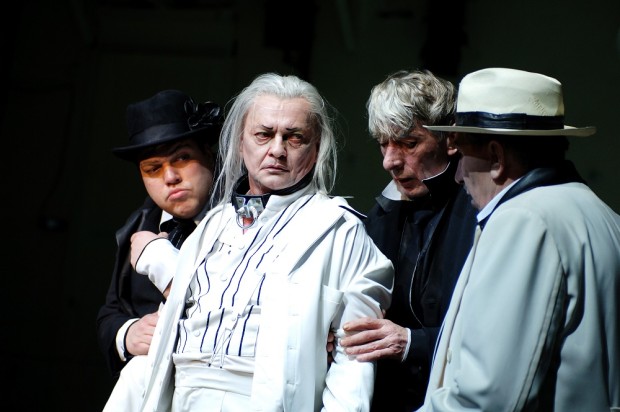 Almost sixty years to the day since Waiting for Godot’s English language premier in London, which then prompted The Observer’s Kenneth Tynan to write that it “jettisons everything by which we know the theatre”, Samuel Beckett’s most famous play still has the capacity to delight, provoke and confound in equal measure. Yet from the off, there is something a little unusual about this production of Waiting for Godot by the legendary Berliner Ensemble.

Stage left, removed from the performance space but conspicuous is a small table and chair. On the right, an old, rather regal looking armchair. Above the theatre’s entrance doors on either side hang picture boards displaying the play’s five characters.

Prior to commencement the mystery of the armchair is revealed by a woman who soon compounds the mystery of the table and chair in the opposing wing. She explains that 92-year old director George Tabori used to sit in the armchair during every rehearsal of this particular production of Waiting for Godot, which began life in 2006. Tabori died in 2007 and the armchair remains in its position in his memory.

What Beckett would have made of this memorial-cum-prop is anyone’s guess but as he had granted Tabori unusual license with his play, a memorial to a figure present yet never present might just have tickled Beckett’s sense of humor.

The woman then takes up position at the small table, a mound of papers before her. The curtain rises to reveal the famous tramps Vladimir and Estragon, busy with their respective pursuits. Vladimir is sat smoking while Estragon is sleeping with his head on a pillow of bricks.

Vladimir comes to the front of the stage and gives the thumbs up to the woman – this curious imposter in Beckett’s narrative. Estragon then approaches and asks who she is. “The prompter”, she replies. Estragon seems relieved. The audience perhaps less so.

Yet as Vladimir, reminds us: “The essential remains the same.” His observation admittedly comes after a mediation on a carrot and human nature but it could also serve as a fair and accurate comment on the Berliner Ensemble’s manipulation of Beckett’s script, which remains entirely intact.

In fact, this twist in the interpretation is so smoothly and superbly executed that there is little sense of ‘rehearsal’ in the formal sense. The occasional forgetting of lines and their ownership, the comic asides and intermittent acknowledgments of the audience form part of a seamless flow, in which Beckett’s loveable characters become more real than representational.

The sense at times of the performers flying by the seat of their pants lends them a greater depth of humanity than the stiffness occasionally found in more laboriously precise interpretations of Waiting for Godot. Vladimir (Axel Werner) and Estragon (Michael Rothmann)’s off-script inventions – throwing a hat to an audience member, taking a couple of photographs, exiting stage to visit the toilet – in fact amplify Beckett’s characters’ own tireless efforts to fill in and pass the time – the premise on which much of the original play is built.

To exactly what extent improvisation and perfectly honed choreography dovetail isn’t clear for the most part, which weaves a thread of the unexpected throughout the performance. The audience doesn’t quite know what it’s waiting for.

Short blasts of music, clock chimes and, most curiously of all, the intermittent flash of neon-type light that draws wondrous stares from the characters punctuate the dialog and the pauses. The sound of a hefty motorbike roaring past catches the attention of Vladimir and Estragon.

Humour and surprise abound. At the beginning of Act Two when the iconic tree has suddenly sprouted leaves, Vladimir reaches behind the tree to flick a switch that illuminates the leaves. In a precocious slight of directorial hand the tramps conspire to knock the tree over, which lands with a convincingly heavy thud. At one point Vladimir is concerned that he might be blocking the audience’s view of events. At another, he leads the large German contingent in the crowd though a lullaby to accompany the slumbering Estragon.

By contrast, Lucky (Roman Kaminski) and Pozzo (Gerd Kunath) bring a starker, crueller edge to proceedings, with Kaminski’s silently yet manically babbling Lucky a disturbing presence. The Boy (Pete Luppa) brings greater realism to the role than is customary, exiting the stage – and theatre – via the stalls as though marching off for his early coffee break.

However, it’s the art of ensemble acting that really triumphs in this contemporary take on Waiting for Godot. The Berliner Ensemble was founded by Bertolt Brecht and his wife, Helen Wiegel in 1949 and the large troupe of actors work closely together for years and even decades. The simpatico interaction between all five actors in the Ardhowen Theatre is pronounced. The physicality – the arms around shoulders, the pats on the back and the gestures of frustration, bewilderment and delight – are totally convincing.

This provocative interpretation of Waiting for Godot feels like a one-off as it’s difficult to imagine anyone other than Beckett himself granting permission for such bold licence with the staging. This Irish and UK premier of the Berliner Ensemble’s Waiting for Godot is likely to divide opinion but few will remain indifferent to its stimuli.

The Berliner Ensemble both bends and works within the rules to create something quite special. It remind us in emphatic style that, to paraphrase Pozzo, the tears and the laughter of the world are constant. Ian Patterson