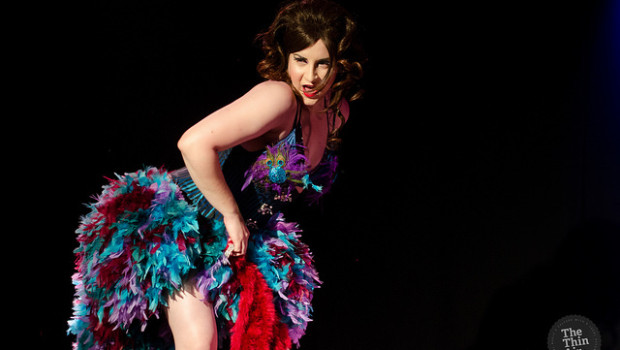 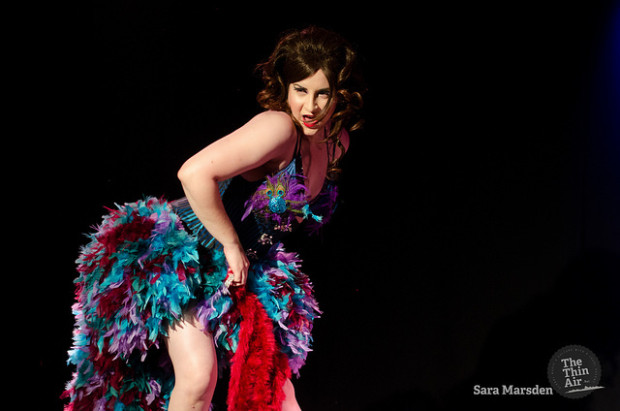 Another year of the Belfast Burlesque Festival and another absolutely knock-out Crown Award Show. As I settle down in my seat for the evening the crowd starts to pour in and the room is filled with excited chatter. Our MC for the evening, Tom Riddle, hits the stage and we begin with the usual Burlesque vocal warm-ups (ooooooh, aaaaaaaaah and wooooooooooo!) Tom is absolutely charming; the audience feeds off his cheeky rapport, giggling back in response to his witty lines.

The first half kicks off with Mimi Dubois (below), and her I Dream of Mimi routine. An absolutely charming act which made us thankful that this genie was released from her bottle! Nodding her head about the stage, granting wishes before boarding her magic flying carpet. Mimi is followed by Scarlett Van Tassel (pictured top), shaking her furs and thrusting her feathery bustle about the stage. She exits the stage before her big reveal leaving the audience wondering what is going on but she peaks her leg from behind the curtains encouraging us to cheer to get her back. 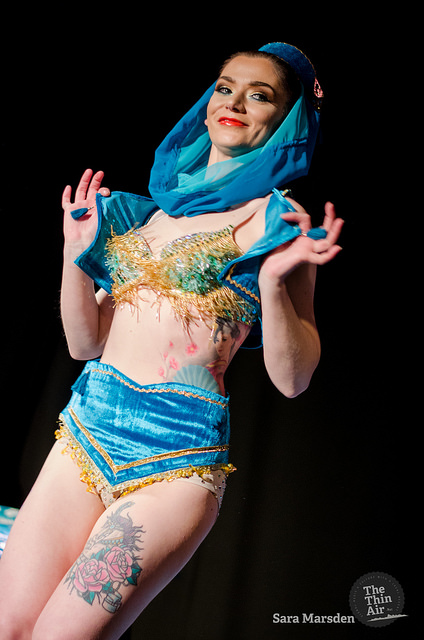 With cheers from the female members of the audience definitely doubled in volume at the prospect, next to hit the stage is Fabio Ego Deflato (below), the first male performer of the evening. Fabio performed his Candy Man routine which sees him transform from a demure candy-striped gent to a leather clad rock god – inviting an audience member to suck on his lollipop… literally. Once everyone has recovered, Blondy Violet graces the stage, a vision in… Mary Poppins. After being pulled around the stage by her umbrella it finally brings her off the stage and to my boyfriend! Stevie is dragged up to act as Blondy Violet’s coat rack; she gets high off a spoonful of sugar and gives him some medicine (and the occasional whip on the backside). Naughty nanny. 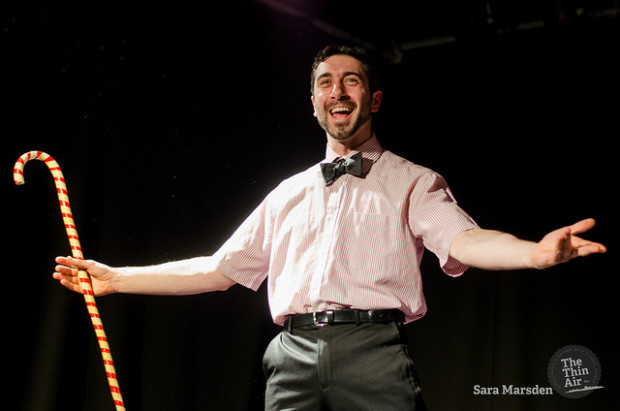 After the break, Santina Spitfire stumbles onto stage, a flapper girl trying to thumb a ride. With no success she begins riffling through her bag and upon finding an empty bottle of gin she produces a sign “Will dance for gin”. She busts out some classic twenties moves while undressing and revealing not only nipple tassels but ass tassels, a hilarious surprise. Next an act which had the audience stunned silent, Fleur Du Mal (below) walks on stage draped in a shimmering robe with a rose in hand. She begins to eat the rose, showing her open mouth to the audience before swallowing the petals. Letting the audience know the roses have thorns, she pricks an apple and licks the juice off it before dropping her gown and lying down on a bed of those roses. I was among those stunned, I had never seen an act like hers – the big reveal of her in nipple tassels wasn’t the end of the routine, it was just the beginning – gyrating on top of thorny roses, encouraging you to be a voyeur of her pleasure from the pain, it was something else. 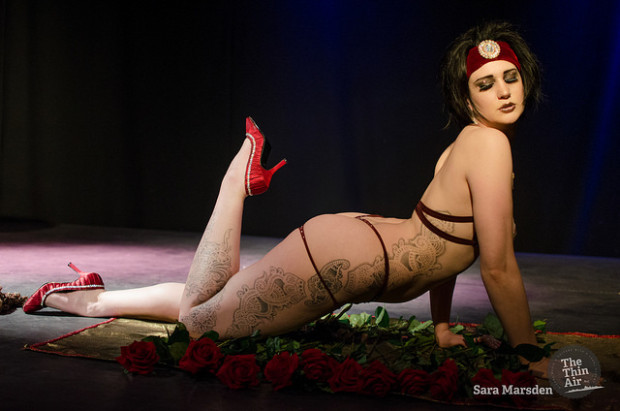 The lights are dimmed as Shir Madness (below) enters in a white glowing gown, she makes intense eye contact with the audience and smiles warmly as she moves about the stage. From the caging of her gown she produces two light up hula hoops and begins twirling them about her body, the lighting is amazing – the darkness interrupted by the fast moving hoops leaving trails of light across the air. 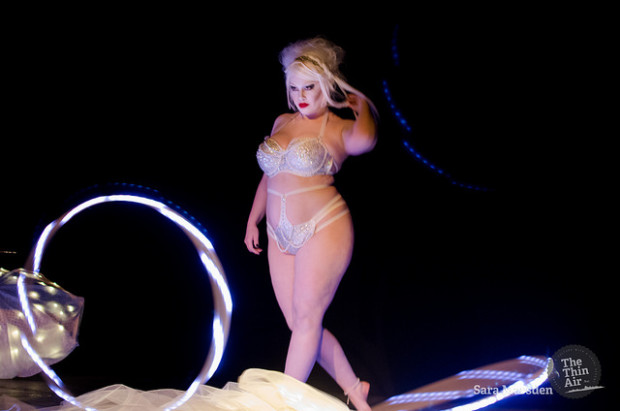 Another interval passes and once the audience is suitably liquored up the last portion of the show begins. Oh Carolina is up, a winner from this year’s World Burlesque Games. She performs in a very classic style with a headdress and feathers, slowly teasing us with the removal of her gloves. Once she is down to her underwear, she strikes a pose and quickly there is a music change. The headdress is thrown off to reveal a mane of long red hair which she is now whipping around, she’s dancing fast and crawling along the stage – performing two opposite styles in one act. The music for the next act begins, The Addams Family theme tune, and I’m smiling already. Pepper Potemkin (below) makes her way to the stage from the back of the room, in the best recreation of Wednesday Adams I have ever seen. She looks melancholily out at the crowd before sitting down on the stage with her bag of toys. She shows us all her Barbie doll, that is before she rips its head off. After discovering she has already amputated most of the toys in her bag she is more gloomy, if possible, but once heavy metal begins to blare out from the sound system a smile spreads across Wednesday’s face. She begins to head bang and strip off, ending the act with a fan dance (with black fans of course). 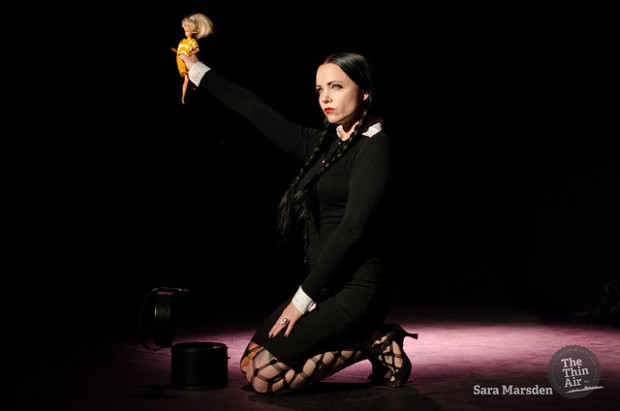 Following Wednesday, Pretty Boy Rock as Napoléon – he furiously rides his imaginary horse in between conquering blow up dolls “Syria” and “Russia” in his quest for the crown. He finishes by bursting out of his shirt, revealing French flags over his nipples, euphorically placing the crown on his head and riding away on his horse. All the while the audience is in fits of laughter. Alice in Wonderpants is our closing act for the evening. A large mushroom sits on stage and once the music begins it starts to move and grow, a hand comes out of the top and from the mushroom appears the Cheshire Cat.  From Cheshire Cat appears Alice, and after drinking a magical potion she rips off her clothes revealing playing card underwear. It’s a really interesting act, going through all the characters of wonderland.

The judges take some time deliberating over their winners and when the results are in the performers are all gathered on the stage. In 3rd place, Alice in Wonderpants. In 2nd place, Santina Spitfire and the crown winner, Fabio Ego Deflato! Confetti cannons explode all over the stage as Fabio takes his crown and the performers begin hugging and congratulating each other. It was an amazing night full of laughter and entertainment, and what a treat to see so many wonderful and talented performers all under one roof!

To keep up to date with the next Belfast Burlesque Festival events check out their Facebook page here.