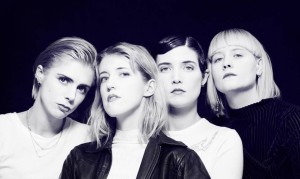 Stockholm four-piece Moon City Boys recently released their new track, ‘City’, a song which, for those of us outside of Sweden who haven’t had the pleasure of seeing them live yet, served as only the fifth piece of officially released music to come from the band. Having formed in 2011 but conscientiously taking their time before putting out a lengthy release, the group have released two 7″s to date, the Rockets/Stranger in 2014 and Let My Love Dance/Washing Machine in August 2015. Each of the songs on those releases showcased a group with clear influences taken from the likes of Jefferson Airplane (‘Washing Machine’) and The Velvet Underground (‘Rockets’). But never do those influences feel forced upon them. Rather, the sonic impact of those acts on Moon City Boys feel far more like a shade or texture with which the band have crafted their own sense of identity.

Nowhere is that more evident then on ‘City’, their most recent single and, as rumour has it, the first track to be taken from an upcoming debut LP. The song is littered with instrumentals that all sound distant from one another, creating that sense of urban discomfort. The drums clatter distinctly, as if spitting at the guitar and bass lines from across a busy street. This is an effective sound though and gives the song an abrasive quality that becomes quite addictive after the first listen or two. These elements are tied together then by the vocal work of Sofia Ellis whose singing is both sharp and resonant, inflected tastefully and giving the song yet another quality of urbanity, a sense of vastness. The jarring instrumental coupled with that vocal channels that city atmosphere to great effect, that atmosphere of claustrophobia within something so large. It is an infectious track that captures it’s lyrical theme with finesse, both vocally and musically. And if that is a consistency and competence we can expect from Moon City Boys whenever that debut LP does come, we have a lot to look forward to.