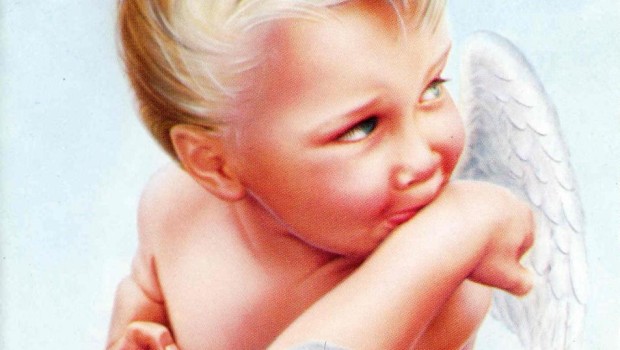 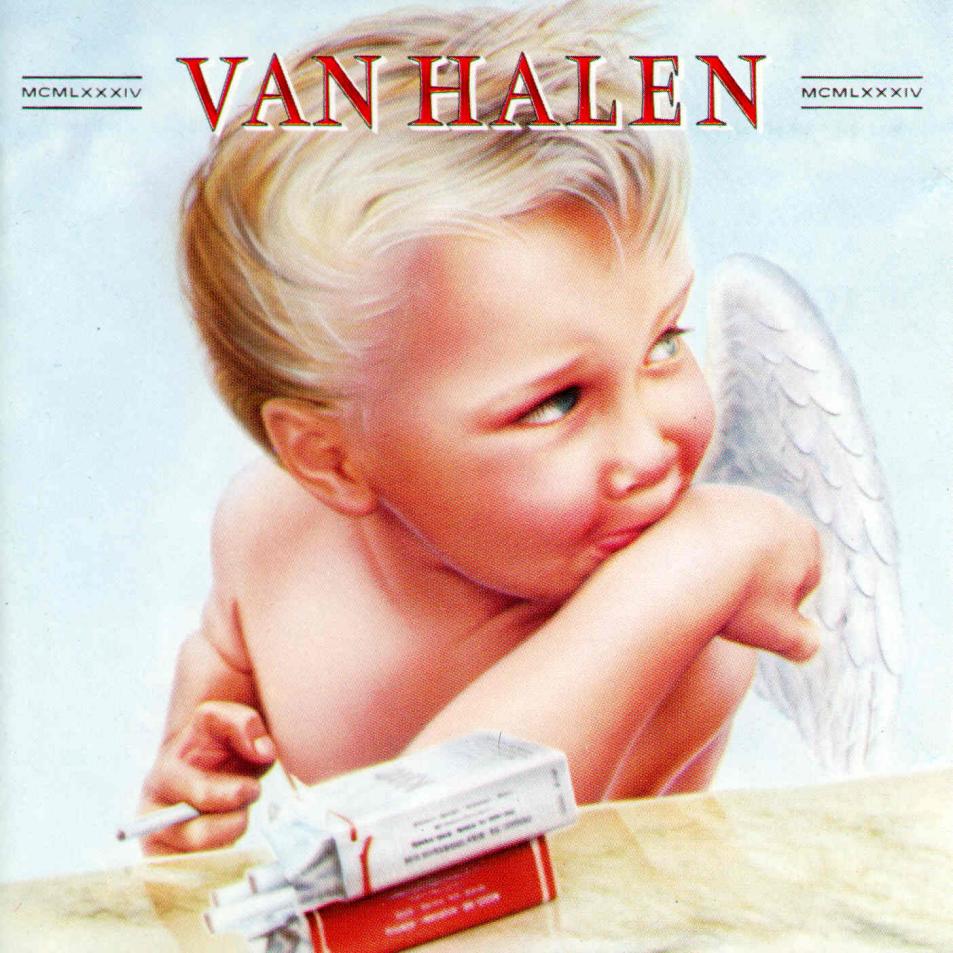 Two immense planets having been moving in synchronous orbit around a dazzling sun for a few years now, their every movement in synch with each other. But on one of the planets, a new technological overlord has begun conducting experiments, playing with dangerous new discoveries that will threaten to transform the harmonious nature of these two planets forever. Eddie Van Halen has mastered the synthesizer, and is about to smash headlong into the party-loving world of David Lee Roth, with devastating consequences. The year is 1983, and things are about to get rough.

Van Halen’s self-titled 1978 album is one of the greatest debuts in the history of rock, a sleek, fully formed monster of a record, dripping with ambition and confidence. The band had exploded onto the LA rock scene, and had translated every inch of the drive and talent that had made them the Kings of the Sunset Strip onto vinyl.

But subsequent albums hadn’t quite been made of the same stuff, and whilst Van Halen had firmly established themselves as a major rock contender by the start of the 80s, there’d been expectations that they should have conquered the entire world by 1983. Instead, Diver Down (1982) had been a commercially successful bunch of cover versions, a lucrative, but unsatisfying artistic statement. Whilst they’d reinvented the guitar on ‘Eruption’ back in ’78, by ’82 they were doing Roy Orbison covers.

Guitar genius Eddie Van Halen had grown stale, tired of the instrument that he’d made his name with. He’d pushed the band from their party-rock roots, embracing darker and more complex material, always looking for the challenge. On the other hand, singer David Lee Roth, and producer Ted Templeman, who was responsible for capturing their wildfire energy in the studio, were firmly of the opinion that Van Halen were at their best when they stuck to straight-ahead hard rock. And whilst they’d indulged Eddie, allowing him to introduce some more abstract songs, the pop hits were what brought the money in.

For many, the synthesizer had been the enemy of rock, something that stank of disco records, or the effete British New Wavers who were threatening to launch a second British Invasion of America. Rock was ROCK, and it was played on guitar, bass, and drums. But for Eddie Van Halen, it was another string to his already formidable musical arsenal, a new compositional tool, a new challenge. The ‘pop’ instinct had won out on Diver Down, and for the follow up, Eddie Van Halen was ready for war.

The first broadside in the great struggle for control of Van Halen, ironically enough, came when Eddie Van Halen played on one of the biggest pop hits of all time. Qunicy Jones was in the process of transforming Michael Jackson from a Motown and disco star into the epitome of what a modern pop musician could be. Off the Wall (1979) had been a huge smash hit album, but for Thriller (1982), he wanted to push the envelope.

‘Beat it’ was a taut hard rock song, full of streetwise lyrics and stylish aggression. It powered along on a sleek guitar groove, courtesy of Toto’s Steve Lukather (Steve and Jeff Pocaro from Toto also provided synth and drums for the song, cementing their reputation as session kings). But a turbo charged Eddie Van Halen solo took the song into the big league, transforming it from a tight pop-rock song into a classic.

Legend has it that the other members of Van Halen didn’t know about Eddie’s moonlighting until they heard the song on the radio.

And now, having proved that he could do pop as well as anyone, Eddie Van Halen set about wrestling control of the band that bore his name from his producer and frontman. 5150, the LAPD code for an escaped mental patient, was built near his home in Coldwater Canyon, and was designed as the home studio to end all home studios. By no longer being constrained by Templeman’s availability or regular studio opening hours, Eddie Van Halen constructed a base of operations that allowed him to make music as and when he liked. And by simple virtue of geography, he could assert his dominance over the band, making them dance to his own tunes.

For David Lee Roth, watching Van Halen assert control over the band, the battle lines were being drawn. Right from the beginning, whilst Eddie had possessed the incendiary musical talent that won them the attention of their peers, it was Roth who acted as the focal point for the band. Whether he be playing the fool, spitting out salacious lyrics, or acting as a bona-fide rock and roll shaman, he was one of the best frontman in the business, possessing an innate sense of fun, as well as a strong and distinctive voice. He also contributed the words and vocal harmonies that were a Van Halen trademark, and for Eddie to dominate the studio was nothing less than a declaration of war.

And that’s where the synthesiser comes in.

After a short synth driven interlude that doffs its cap to EVH’s composerly ambitions, ‘Jump’ announces its presence like the second coming of the messiah. The gates of heaven open, and astride a cloud, Eddie unleashes one of the most distinctive synthesiser riffs ever written. Roth rises to the challenge, howling and crooning effortlessly, as EVH goes into meltdown, creating complex, hand-played webs of synth melodies. In one fell swoop, Eddie Van Halen’s version of the band conquered the pop charts AND the rock scene, opening the floodgates for hard rock bands to embrace new technology without fear.

As befitting a record made in a home studio, 1984 has more than a few rough edges. Everything has a live sound to it, and a distinct lack of polish. Overdubs are used fairly sparingly, and whether the dominant instrument was guitar or synth, the overriding sound is of a band playing live, doing what they do best.

In a sense, the sheer arrogance of Eddie Van Halen is staggering. The man had proved he was one of the greatest guitarists in the world, introducing a fret-melting quality that could only previously have been dreamed of. But on the synth, he does exactly the same, playing the keyboard like a guitar, letting his fingers do the work, rather than a machine. For many rock fans, the suspicions around synths had been that they weren’t ‘real’ instruments, programming and sequencers allowing the computer to play the music, whilst the ‘programmer’ could just sit back and marvel. EVH turns the notion on the head, dexterously showing off what he was capable of. And on the hard rock tracks on the record, he tosses off riffs and guitar-solos like they were the easiest thing on earth, almost as if they were beneath him.

And if it is arrogance – which it could well have been – then it is absolutely compelling. This is a young man at the absolute peak of his abilities, making visionary rock music as easy as he lives or breathes. And, with predictable inevitability, David Lee Roth pulls out all the stops to outpace his rival.

In every way, Roth’s presence on 1984 was his personality taken to the max. He’s sleazier, funnier, moodier, and more energetic than he previously had been, whilst sounding like it’s the most natural thing on earth. On ‘Panama’ he matches the expansive sheen of EVH’s guitar, hollering the ultimate ode to a four-wheel vehicle. When he sings, “We’re running a little bit hot tonight”, you can feel the heat coming off the road.

‘I’ll Wait’ featured the heaviest use of synths other than ‘Jump’, and both Roth and Templeman wanted it off the album. EVH persisted, and the song was completed with help from former Doobie Brother Michael McDonald. Over a pulsating synth bass groove, Roth sings a provocative ode to a model in a magazine, pulling off the trick of being somehow sleazy and thoughtful. Released as a single, EVH’s persistence paid off when the song resulted in another monster hit.

And at the complete other end of the spectrum, ‘Hot For Teacher’ allows both men to arrogantly flaunt their respective gifts, in competition to seemingly be the most outrageous. The song is ridiculously slight, basically consisting of a tribal drum pattern, whilst EVH solos like the guitar is going out of fashion, and Roth crams in every innuendo and party trick he can manage. It’s a one chord boogie that is so extreme in its simplicity that it’s stunning to think of anyone ever ‘writing’ it. Of course, it was another hit.

1984 catapulted Van Halen into the stratosphere, giving them the kind of success many felt they should have had from the beginning. It was also the end of the band, the twin forces of Eddie Van Halen and David Lee Roth no longer being able to sustain their partnership. Roth’s good-time comedy persona could no longer support the artistic assertions of the guitarist, and in later years Roth would lambast EVH’s music as being morose, while EVH would clearly react against Roth’s goofy antics.

Naturally, the Van Halen story doesn’t end there, but 1984 remains a magical thing; a record that captures two diverse talents straining at each other, revealing the explosive vein of creativity that lies at the absolute periphery of their relationship. If David Lee Roth and Eddie Van Halen were two planets on a collision course, 1984 is the most magnificent of explosions. Steven Rainey 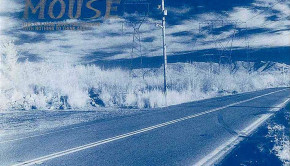 Road To Nowhere: Modest Mouse’s This Is a Long Drive For Someone With Nothing To Think About, Twenty Years Later →