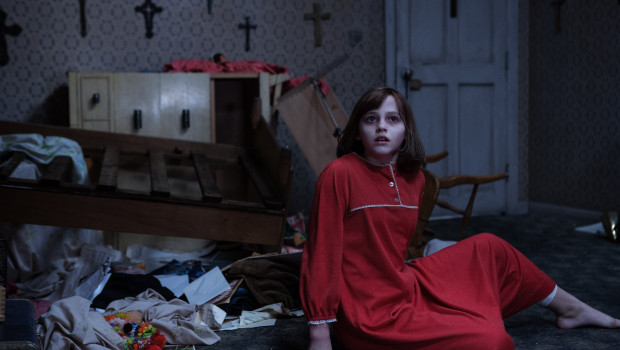 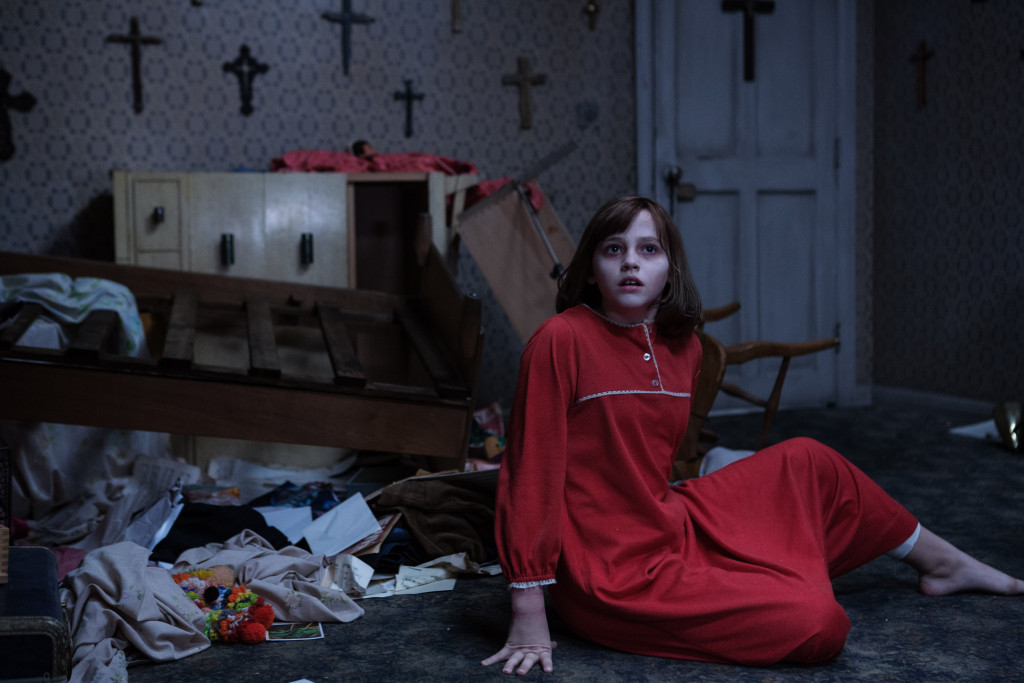 Contrary to totally-legit marketing stories about priests stationed at screenings, ready to deliver spiritual counsel to distressed moviegoers, The Conjuring 2 is not all that frightening. It is, however, probably the most entertaining big-studio horror movie of the past five years. Not because of the scares, but because of how relaxed it is around those scares. With two Insidious‘ and the first Conjuring under his belt, James Wan is confident enough not to just serve up the jump-scare hard sell that has become the default mode for multiplex horror.

The film begins with a nice bait-and-switch: Ed and Lorraine Warren (Patrick Wilson and Vera Farmiga reprising their roles as marital ghost-busters) are communicating with spirits in a living room located in the notorious Amityville zip code. Years ago a man went crazy in the night, possibly under paranormal influence, and went room to room with a shotgun, blasting his wife and kids. There’s a creepy kid with glowing eyes, a demon-faced nun, and some seriously bad joo-joo. It’s pretty much the scenario you’re expecting. And then, ten minutes in, we’re done, and the action flips to merry old England, for a riff on the real-life ‘Enfield haunting’. Thatcher’s on the telly, the dentistry’s terrible and the spirit of a grumpy old codger is going bump in the night.

Chad and Carey Hayes and Wan’s screenplay takes its time, establishing a sense of place, so that we actually give a shit when the terror begins. Young Janet (Madison Wolfe) is the object of the restless spirit’s attention; bedroom furniture is darting around with a mind of its own and she wakes up in odd places around the house. For single mother Peggy (Frances O’Connor) it’s another unwelcome source of stress for the loving but struggling family. We’re so used to horror happening in big draughty farm houses with spooky-shaped horticulture that the relocation to a semi-detached London redbrick feels like a welcome change of pace. The drab furniture and questionable sweaters; mum on the phone fretting about bills with a fag in her hand, and confiding parental anxieties to her neighbour (also, cheekily, named Peggy). These people aren’t just bodybags for spooky shenanigans. They’re sympathetic.

Surrounded by the dead, it’s the living who shine. Wilson and Farmiga have excellent chemistry, their teasing back and forth peppered with the little touches of a lived-in marriage. Wan’s sturdy control of tone keeps the film engaging in between the spooky stuff, and he’s not above hitting pause altogether to let the haunted enjoy a moment. To cheer the kids up, Ed puts on his best Elvis impression for a rendition of ‘Can’t Help Falling in Love’, the camera cuts to Farmiga’s soulful face, and her watery, spectral-blue eyes, and it’s honestly pretty moving. Wilson is earnest and a bit of a dolt and delivers a cracker joke about ’70s tech.

O’Connor and Wolfe are a good as the mother and daughter dealing with the incomprehensible. The time devoted to Janet’s anxiety over not being believed by the adults, and ostracised by the kids at school, helps the emotions breathe but there’s potential for a more psychologically rich exploration of the poltergeist as a manifestation of familial and social distress. That’s interesting. A room full of spinning crucifixes isn’t. The Conjuring 2 never rises above just well-made, but there’s value in that. Wan and cinematographer Don Burgess have a lot of fun with the camera, gliding and ducking into dark corners, expanding the space and playing with tension. The air is one of professionals at work, doing what they’re good at. The Warrens in particular have confirmed themselves to be the franchise’s silver bullets, a duo well worth rooting for, through this life and the next. Conor Smyth