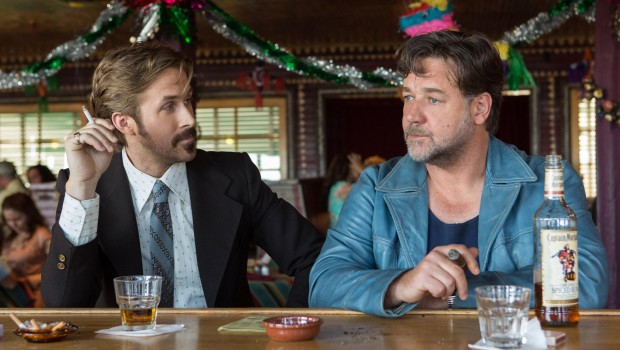 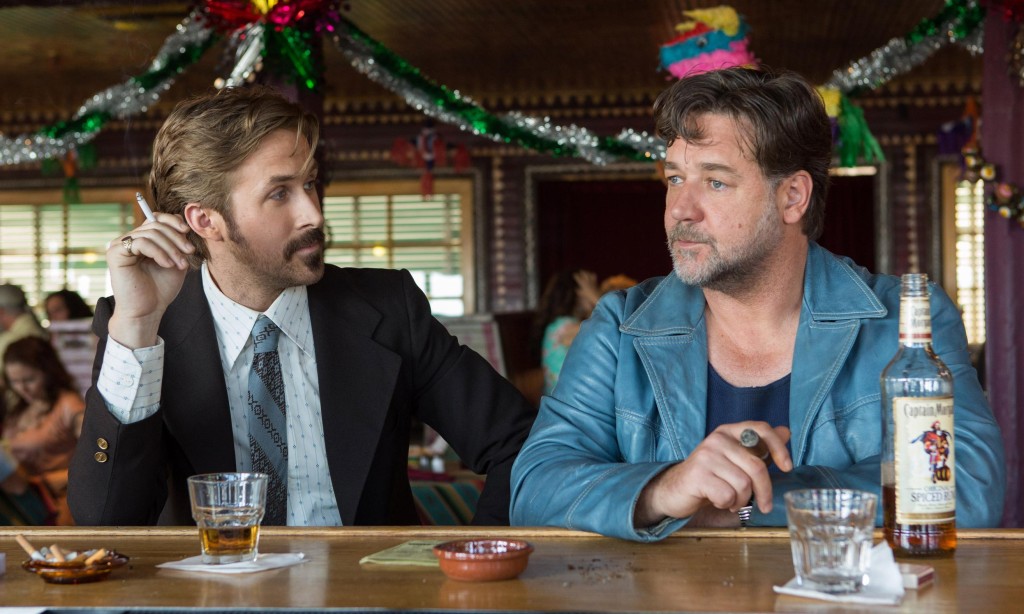 These guys aren’t really that nice. That’s the joke, I guess, but it’s hardly their fault. No-one’s particularly congenial in this 70s L. A. smogscape, where even the birds are giving up and dropping out of the sky. The Nice Guys, written and directed by Shane Black, Hollywood’s go-to guy for snappy, emotionally wounded buddy comedies, is smeared with the film-maker’s fingerprints. Ryan Gosling and Russell Crowe are a mismatched pair of low-level private investigators. There’s a dead wife, quipy banter, a lot of boozing, a stray Christmas jingle and at its centre two figures of bruised, broken masculinity, struggling with the matter of how to be good, and whether being good is even worth it in the first place. Black is firmly in his wheelhouse, but it would be ungrateful to complain when the final product is this consistently generous in entertainment.

Crowe is Jackson Healy, a bruiser for fire with a soft spot for distressed damsels, lending out his knuckle dusters to anyone with some cash and a grudge. He’s Bud White, basically, his rage replaced with the weathered weariness of someone who’s been around the block but still operates with something resembling profession pride. Into his orbit comes Holland March (Gosling), a widower with a whipsmart 13 year-old (Angourie Rice). Holly’s a veritable Nancy Drew but her father is a shambles of a man with a drinking problem. He’s been hired by the aunt of a dead porn star named Misty Mountains – whose car, in a spectacularly cheeky opener, comes crashing through a young boy’s bedroom, her naked near-corpse sprayed out in a centerfold pose. Ms. Mountains’ relative is convinced she’s spotted the deceased alive and well and March, never one to turn down an easy gig, takes the case.

There’s another young woman in trouble, Amelia (Margaret Qualley), the daughter of some  Justice Department top brass (fellow L. A. Confidential alum Kim Basinger, not bringing much fire), currently AWOL and a roving target for Matt Bomer’s assassin. She’s at the centre of a web of intrigue, involving dodgy air-filter shenanigans from the auto-industry (timely) and a porno film reel MacGuffin. It’s a shaggy dog story which mostly holds together, apart from a storytelling snag two thirds of the way through, a favour involving a suitcase of money that the protagonists would never actually agree to. The windy plotting is really an excuse to bounce the two leads off each other, in scene after scene of popping chemistry.

Crowe is great; a stodgy beefcake with a heart of, well, not gold, but something similar. A nice copper maybe. He’s the straight man to Gosling’s show-stealing clown, all reaction and flailing energy. Gosling as a 70s detective could have been another figure of achingly detached coolness, like Drive’s bomber jacket clutch-fiend, but he gives a deeply funny performative turn. Gosling throws himself – quite literally – into madcap comic routines, over balconies, down hills and through sheets of sugar glass. Black has always been good at scripted back-and-forth, but this physical slapstick is a new, very welcome, development, and Gosling proves himself to be its perfect ragdoll instrument.