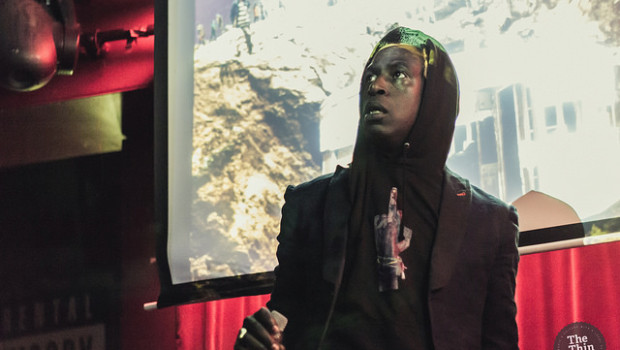 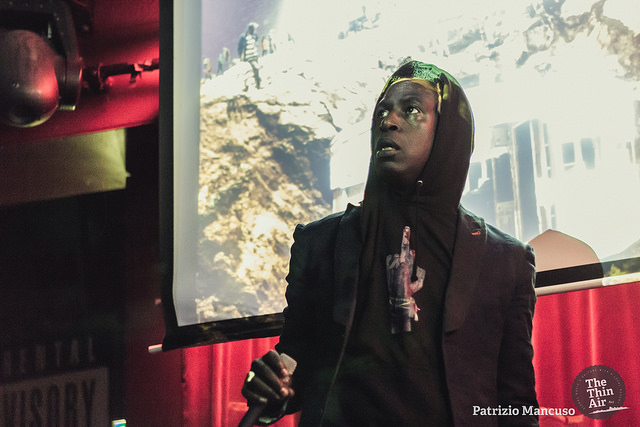 We’re very good at pretending nothing’s wrong. Rather, we’re excellent at grunting a few times about how shambolic everything is before sauntering to the bar and quickly changing the subject. Of course we are! We’ve become so resigned to the radical shitness of so much that goes on both far from home and right outside our doors that half the time we just sigh a little and tweet a GIF of a cat that somehow represents how doomed everything is. Sometimes though, we have a tendency to surprise ourselves with our potential. Every once in a while something gives us a drive and an energy to actually do something, to put down our phones for eight seconds and take part in unified roar. It doesn’t often change much, but confronting that fear and anger and letting it unleash itself from a collective can contribute to a small tectonic shift that will one day lead to an earthquake. Saul Williams’ first trip to Galway’s Roisin Dubh in eight years landed at as right a time as any for a room full of people to get a bit of a kick to remind us that we shouldn’t be so compliant, so resigned, that we should actually be feeling something. Not only that, it was loud and a hell of a lot of fun.

Support act number one came in the form of local new blood Crazed, a regular at the Roisin Dubh’s weekly open mic night. Performing with only an acoustic guitar as accompaniment, Crazed’s rapping/singing/talking/yelping is hard to latch onto at first. Is he serious? Is it satire? There are parts that are funny – a song called ‘Beour’(?) about… that special beour in your life – and there are parts that have the intent and heart of aggression and despair that we’re all so good at avoiding (‘My Generation’). At this early stage in his game, the satirical parts aren’t quite clever enough nor the angry parts thought out enough to have a massive impact. Nonetheless, as he screams “My generation is fucked” over again with hysteric laughing in between each line you get the impression that he is a writer with a lot drive and potential. More opportunities to develop his confidence as a performer and as writer could see giant leaps for him.

Next up was a set from rapper Sebi C and producer Noid the Droid, a duo that have practically never played together before, making its thirty minutes all the more thrilling. Droid, a co-founder of Galway’s Bap to the Future club night improvised on hardware to make throbbing, low-end backdrops to Sebi C’s fluid verses. The interplay of the music’s intensity with the monochrome, snarling flow of the vocals create a wave of pressure that is difficult not to feel in the pit of the stomach. More collaboration from these two please. 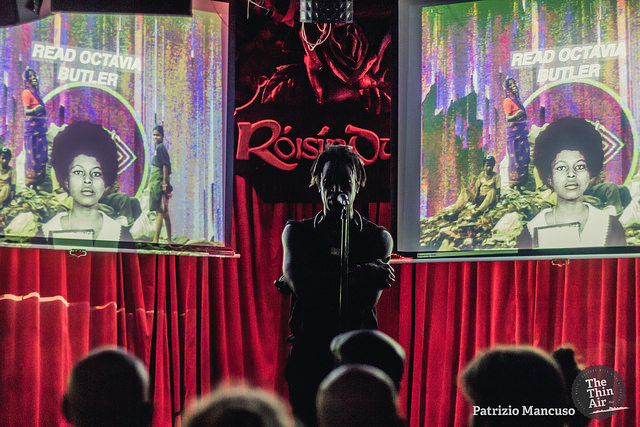 When Saul Williams takes to the stage the room is near capacity and ogling at the visual backdrops on two screens, mashing pictures of socio-political figures with cityscapes and colours, a windows 95 desktop, a blue screen, and constantly flashing quotes from his 2015 album MartyrLoserKing, the tracks from which make up the bulk of tonight’s performance. Donning a hood and sunglasses, the set begins with ‘Down for Some Ignorance’ and ‘Groundwork’. After four songs he has lost the hoodie and the shades and is in the dead centre of the crowd performing ‘Ashes’ with ferocious energy, giving the spectators a boost of animation before bringing everyone to total silence as he leads into ‘Burundi’ without a microphone. By the time ‘The Bear/ Colton as Cotton’ comes around we are eating out of the palm of his hand, sucked in by frenzied samples and jarring visuals and one line from the track comes to mind, highlighting the rest: “Hack into comfort and compliance”. What this show is doing is shaking us, at least temporarily, from our comfortable space of denial and giving us something to feel passionate about. Coming toward the end of the set the room is in captivated silence at ‘Black Stacey’ and ‘Said the Shotgun to the Head’ before being throttled to bits by ‘All Coltrane Solos at Once’ and ‘List of Demands’. By the time it’s over we’re all walking out of the room feeling a bit more energised, with heads spinning. While everyone either went home to bed or straight to buy a pint, the fact that Williams’ set triggered something in everyone’s chests and minds is unavoidable. And that will linger. Even if we are still just sighing and grumbling this time next week. Eoin Murray