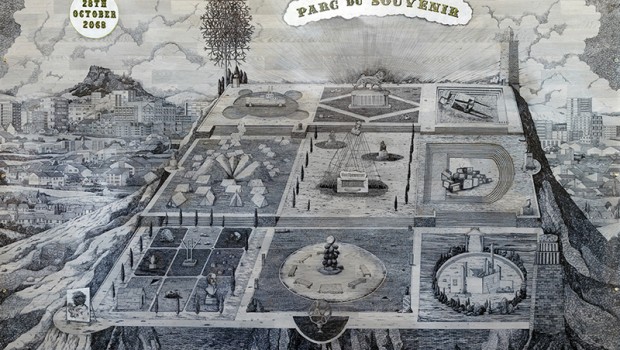 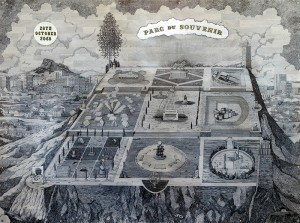 Albert Sitzfleisch is a failed architect. A failed architect who works for the Council of Europe. The year is 2068, a date that is tantalisingly close but also just out of reach – will we all make it to this year? Holed up in his rented cabin in the southwest of Ireland, following 30 years of travelling around Europe, Sitzfleisch has with him for company his memories and views of the continent in several supermarket bags for life. A print of a top down view of Scotland grabs his attention, skewed to the side with mainland Europe in the distance it presents a view rarely explored by cartographers.The print is the work of Arthur Geddes, son of the famed Scottish sociologist and town-planner Patrick Geddes (1854-1932), and sparks Sitzfleisch’s reflection on his journey: Edinburgh 2047, Saint-Dié-des-Vosges 2045, Weimar 2039, London 2052 – they all fly past.

And so unfolds Sitzfleisch Recalls and the fictional tale brought to life in Stephen Brandes’ latest show Parc Du Souvenir in Dublin’s Oonagh Young Gallery. Brandes is a multi-disciplinary artist and in Parc Du Souvenir we see video work coupled with montage, print work and drawing. It’s the unconventional nature of the material choice for the largest and signature piece of the show that first intrigues as you enter the gallery. The large monochrome drawing is created on lino flooring vinyl, a material Brandes has previously explored. In the background we can see Edinburgh Castle, in the surrounding middle ground a litany of terraced housing hems in a garden of monuments. The garden is a future vision for an unrealised project by Geddes Sr. While the original was to house a tribute to the nine Greek Muses (Edinburgh was regarded as the ‘Athens of the North’ during the city’s period of enlightenment in the late 18th century), Brandes presents an alternative future of stacked television, Goethewurst food stalls and mutilated monuments featuring toppled idols. Traces of the vinyl’s pattern appear in areas and upon closer inspection a wood-like pattern emerges – this sees the piece take on the qualities of a wooden printing block, ready for reproduction to fulfill the dystopian vision.

As you survey the works on the walls you are repeatedly drawn back to the video, it’s hypnotic sound emanating throughout the gallery. The two videos, Stizfleisch Recalls and Sitzfleisch Reflects, are played consecutively on a screen housed in a wooden create, further enhancing the museological aspects of the presentation. In Sitzfleisch Reflects we see reflections on the work of Geddes Sr., and are introduced to his re-imagining of Edinburgh’s slum districts into modern spaces. This vision, originally shown in London, traveled to Belfast, Dublin and Ghent before returning to Dublin just prior to the outbreak of World War I. 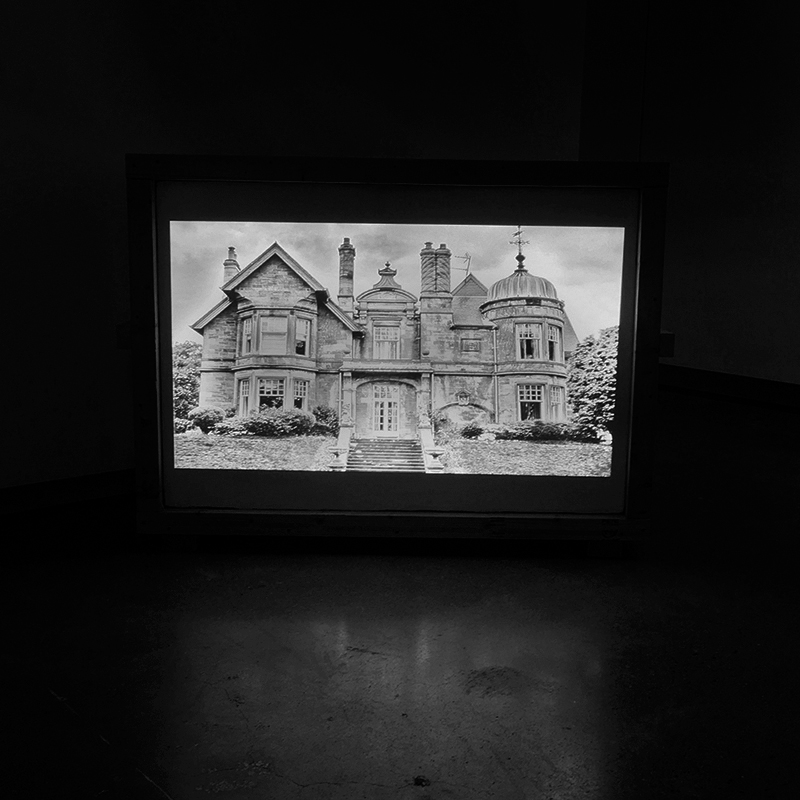 As well as musing on the creative world of Geddes, Brandes also reflects on the later more destructive world of Günter Grass. Grass was born in the then Free City of Danzig in the interwar years. After the city was raised, first by Allied bombings and secondly by the advance of the Red Army, it was absorbed into the Poland post World War II. It’s German name changed, its German citizens expelled and it’s German architecture rejected and re-imagined alongside other stylistic aesthetics. By aligning these two disparate approaches to town planning Brandes highlights the power that these spaces, and their curation, have to shape the cultural impact on the surrounding populations and habitats, while also voicing caution on the motives behind them.

The exhibition remains in the consciousness as you leave the gallery and exit into Dublin. You turn off James Joyce St. onto Railway St. and encounter the vernacular of Dublin’s inner city social housing. The curvaceous Art Deco style orchestrated and designed by Herbert G. Simms in the early half of the 20th Century. Did Simms encounter Geddes and his exhibition during its multiple visits to Dublin? Have I just walked past an infantile Albert Sitzfleisch? Who knows, the joy is in the question and subsequent pondering, and in Parc Du Souvenir Brandes creates many avenues for contemplation.