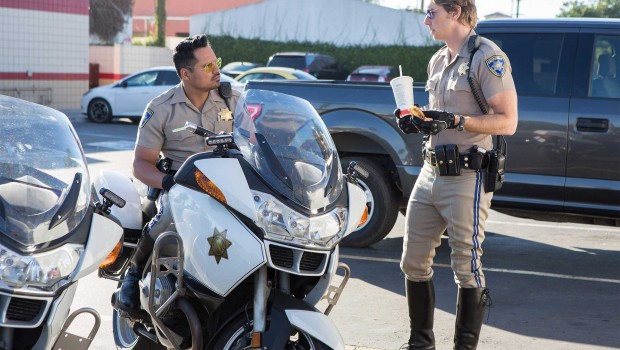 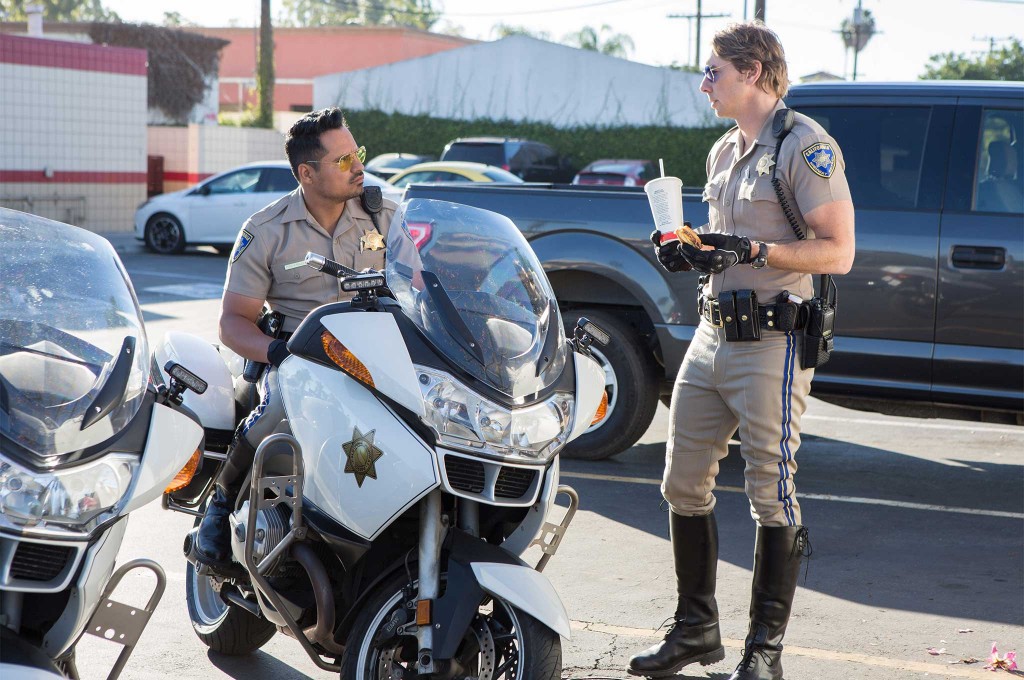 Based on the 1977-1983 television series of the same name, CHiPs is an action-comedy remake strangely obsessed with the question of what can and cannot be considered homophobic. Frank ‘Ponch’ Poncherello (Michael Peña) is an FBI agent who goes undercover in the California Highway Patrol to uncover some dirty cops. On the morning of his first day, changing in the locker room, he bristles when his new partner Jon Baker (Dax Shepard), clad only in tightie whities, reaches for a hug. Ponch quickly explains he’s not homophobic or anything, it’s just a weird thing to do with a stranger. Cut to a close-up of bumping crotches to back him up.

Later, when Jon collapses at home, naked except for a curtain over his privates, Ponch has to help him up and carry him to the bath, which he only does after some protesting. When Jon mentions the H-word again, Ponch does a little speech about how he can’t be homophobic because Jon’s not gay, and if is going to keep using the word he should get it right. Putting aside the fact that Ponch clearly gets meaning of the word wrong (homophobia does not just switch off because there are no gay people in the room), why on earth is a generic studio buddy cop flick spending so much time talking about this?

To be fair, CHiPs does have a gay character, another patrolman. We know he’s gay because he tells us he’s gay and then, when two attractive female colleagues are discussing whether Jon or Ponch is the hotter of the two, he chirps in with ‘I’d do both of them!’ That’s the joke. The joke is that he’d have sex with both of them. Because he’s gay. The gay panic stuff is the most bracing example of the film’s weird, mean-spirited adolescence. CHiPs is a vehicle for Shepard – he writes and directs too – and it’s hard to mesh the material with the lackadaisical, affable persona Shepard’s performances on television and film communicate, especially his long-running role on NBC’s Parenthood. To be fair, it’s hard to believe an adult wrote any of this.

Shooting for a mix of Super Troopers, 21 Jump Street and last year’s War on Everyone, in which Peña also played an asshole cop, CHiPs has the wearisome tits-and-guns raunch of a straight-to-DVD studio comedy from the early-00s. In this film’s world women exist to either be fucked (if they’re hot) or laughed at (if they’re not). The two female supporting characters are there to stroke the ego of the male ones, Rosa Salazar playing the love interest who comes around to Jon’s charming ways, and Jessica McNamee as a cop with a foot on either side of the law. Kirsten Bell plays Jon’s emotionally estranged wife, an empty blonde who flaunts her infidelity and is introduced in a tight wet swimsuit via Cleavage Cam. When Ponch accidentally sexts his superior he freaks out and throws his phone in the fire and we’re supposed to share in his disgust because, sure, tits are awesome, but old women are gross.

Forgetting the identity politics for a second, what’s this thing actually about? Somehow the plot manages to be simultaneously paper-thin and awkwardly convoluted: Vincent D’Onofrio is the corrupt Lieutenant running a robbery ring out of the CHP in order to raise the millions of dollars needed to get his junkie son out of town and also he’s going to smuggle a painting?? Our heroes, hot on the case, are the worst undercover investigators in history, Ponch revealing his identity to his partner almost immediately, and both of them confronting D’Onofrio (their boss) with vague accusations and no proof. The story is really just a way to string along motorcycle chases, cruel over-the-top violence, dick jokes and buddy banter that only rarely works (summing up modern dating as “everyone is eating everyone’s ass” got a laugh). CHiPs is a reboot that feels instantly dated. Conor Smyth