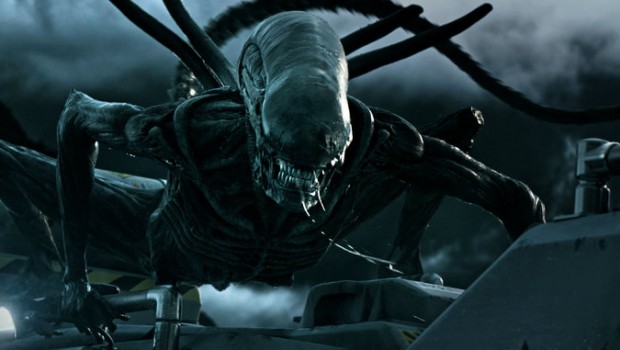 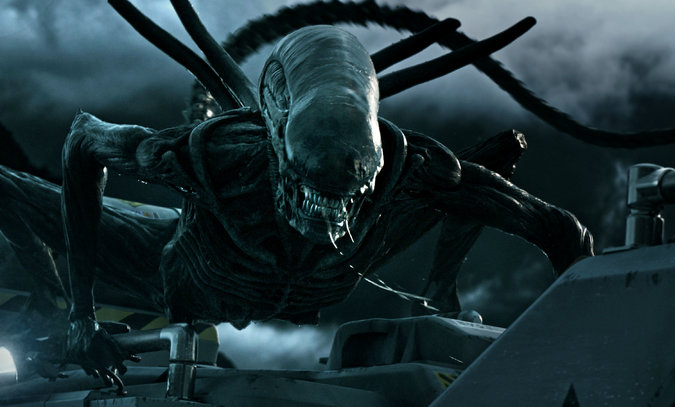 A recurring theme in Ridley Scott’s late-career return to the Alien universe, with 2012’s Prometheus and now Alien: Covenant, with more possibly on the way, is the disappointing and disastrous consequences of hubristic father figures chasing perfection.

The ill-received Prometheus, part Alien teaser, part Lindelofian word cloud, spun its mythic pretensions into a gorgeous, cynical and narratively garbled take on will and birth, outlining how humanity’s space-monk creators tried to wipe us out once they realized their children’s deep, deep failings, deploying a weaponised virus that escaped their control. A formulaic monster horror with an interest in sci-fi abstractions, Covenant opens on an ivory-lit tableux of human achievement, a flashback of corporate titan Weyland (Guy Pearce) showing off civilisation’s marvels to android offspring/butler David (Michael Fassbender): Wagner, Piero della Francesca’s The Nativity and Michaelango’s David, an avatar of sublime form the synthetic admirer adopts as a namesake. The David we meet in Covenant, set a decade after Prometheus’ Weyland-funded excursion for existential resolutions, has nursed his contempt for his flesh-and-bone parents, a noticeable flicker in those early exchanges with Pearce’s Gappetto, into a full-on Dr. Moreau mania, giving him a guiding role in the gestation of H. R. Giger’s famous nightmare machine.

It’s hard not to read into all this hand-rubbing over creation a potentially valuable analogy for the efforts of Scott himself, directing his first proper go at the xenomorphs since the 1979 original. Alien was to cinema what its monster was to biology: perfectly constructed, perversely efficient, wholly irreplicable. We can debate James Cameron’s visceral sequel, sure, but beyond that each trip back to the face-hugging, chest-bursting well has delivered mixed returns. 40 years later, Scott has returned to maybe his greatest achievement, but Covenant does little to illuminate what compelled him to do so, or what story he’s trying to tell. Atmospheric but amorphous, Alien: Covenant feels disposable, sharing with the current fashion for reboots and reimaginings a vague, gesture-heavy and ultimately diminutive relation to established canon.

The story, scripted by John Logan, who wrote Scott’s Gladiator, and Dante Harper, begins in a familiar setting. The crew of the Covenant, a colony mission to a promising new homeland, is jolted awake from deep sleep by choppy waters, when they intercept a distorted message from a nearby, suspiciously hospitable planet. Insecure Captain Oram (Billy Crudup) veers off course in an act of rash pioneer spirit, leading a troupe that includes Katherine Waterston’s grieving but tough Daniels, Danny McBride’s garrulous Tennessee, Fassbender’s robotic ship caretaker Walter (a newer model) and an assortment of thin character types. The prospective paradise turns into a brutal nightmare when that familiar virus goes airborne — these smart people seem awfully casual stomping though vegetation they know nothing about — infects members of the scouting party, and things start bursting out of their bodies (a gruesome calfling sliding out of a poor man’s mouth is one of the few genuinely horrific images). Cut off from their ship by storm clouds, the crew must fend off the beasts and take shelter with the marooned, mercurial David, who has been busy with his time alone. Like much else, David’s god complex is expressed in intensely baroque terms, with liberal quotation from Romantic verse, but at least he brings something different to the Alien schema, an enjoyably loose wire in an otherwise risk-averse retread.

Covenant isn’t a blatant rehash of the original, and Waterston’s heroine  – beautiful, boyish, tank top – isn’t exactly a reheated Ripley, but if you’ve any experience with the extensively mined Alien universe, or monster-hunts-scientists movies in general, little here offers surprise. The kills are harsher and bloodier than much of what we’ve seen in the franchise, but the xenomorph that terrorises the survivors among the planet’s ruins feels slight when framed against the vast alien stone, and its CGI design isn’t always convincing. Covenant has ideas and moments of striking production design but doesn’t make the case for itself. Not terrible, but not terrifying. Conor Smyth