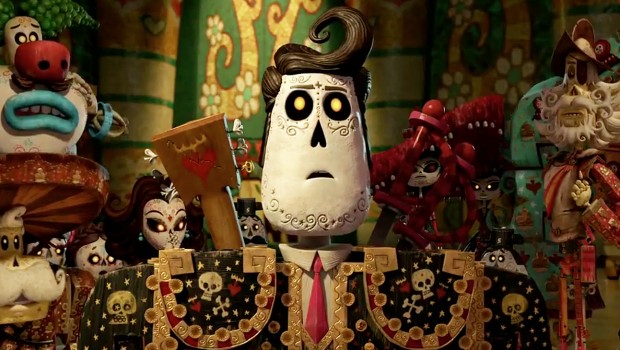 The Book Of Life 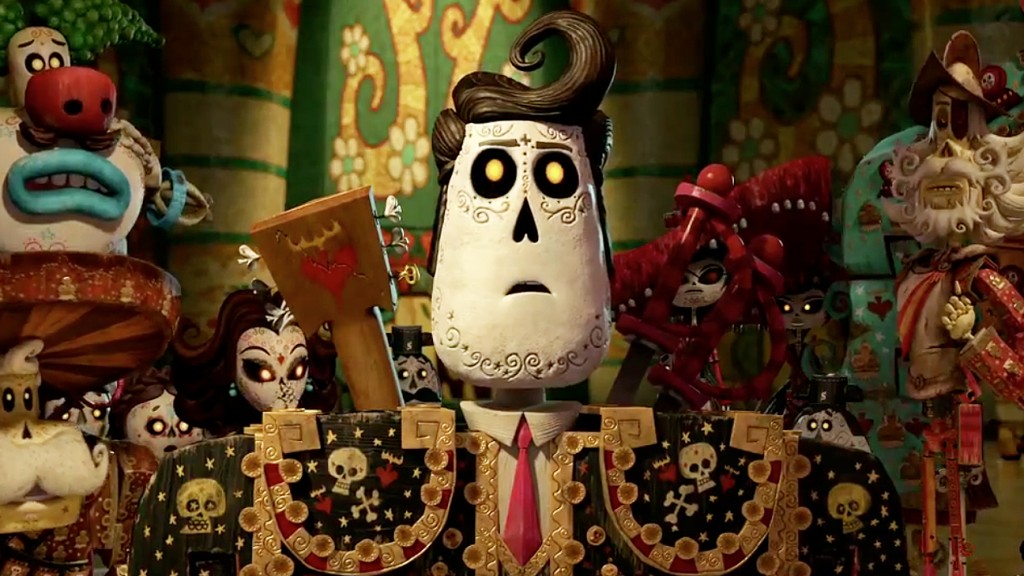 Perhaps more than even Christmas and Halloween, the Mexican Dia de los Muertos (‘Day of the Dead’) is a holiday ripe for cinematic exploitation: it is, after all, a festival of colourful and gothic storytelling. Jorge Gutierrez, who has previously channeled his love for Mexican folklore into the award-winning El Tigre: The Adventures of Manny Rivera for Nickelodeon, pairs up with screenwriter Doug Langdale and uses the day as a backdrop for The Book of Life‘s imaginative story of childhood rivalry and feuding gods. It’s a moderately ambitious but highly charming fantasy-animation with a fun multi-level narrative.

We open on the framing setup: a perky museum tour guide (Christina Applegate) introducing a group of uninterested kids to the ‘Book of Life’ and setting out the story with marionette figures. It’s dustbowl Mexico, in the town of San Angel, where the young Manolo (Diego Luna) and Joaquin (Channing Tatum) are playfully fighting over the affections of the beautiful Maria (Zoe Saldana). Observing are Orpheus and Eurydice stand-ins, La Muerte (Kate de Castillo), ruler of the vibrant Land of the Remembered, and Xibalba (Ron Perlman), who’s stuck with the much less fun Land of the Forgotten. Xibalba is desperate to switch territories so they make a wager on which of the boys Maria will marry. He can’t help but interfere to help his Joaquin along, leading to the death of Manolo and a love story played out across the realms.

The Book of Life deserves credit for handling death in a way which isn’t maudlin or hysterical: much like its calendar namesake, it displays a welcome even-handedness about the issue, even if the message is the fairly stock one of ‘you’re only ever dead when those you love forget about you’. There are shades of darkness here, and flashes of Tim Burton and Guillermo del Toro, who produces, (there’s some classic Disney too in the design of the gods and their underworlds) but the film still moves in a light-footed pace. The central love-triangle is an amicable troupe of characters: Manolo as the bullfighter-in-training who wants to be a musician, Joaquin as the show-off fighter and Maria as an independent-minded young woman who rolls her eyes at her suitors’ preening proposals. Despite the romantic conflicts, there is an endearing and essential niceness to how the characters relate to each other. It also helps enormously that it looks beautiful: the blocky, marionette anatomy of the characters and the vaguely stop-motion storybook design has a lovely tactility and the Land of the Remembered is a flood of pulsating colour.

It’s a busy film, cramming in multiple plot layers, goofy side-gags and original and chart-gleamed musical numbers. By the end, the restless activity does get in the way, denying the film the emotional staying power of some modern animation classics. The glibness and novelty gave way to a more conventional closing set-piece: with the town under threat from local bandits, Manolo has to make it back above ground and help save the day. And Maria, who’s spend most of the film mocking traditional gender expectations, ends up marrying one of the boys. But The Book of Life is still a winning and thoroughly wholesome distraction. Conor Smyth