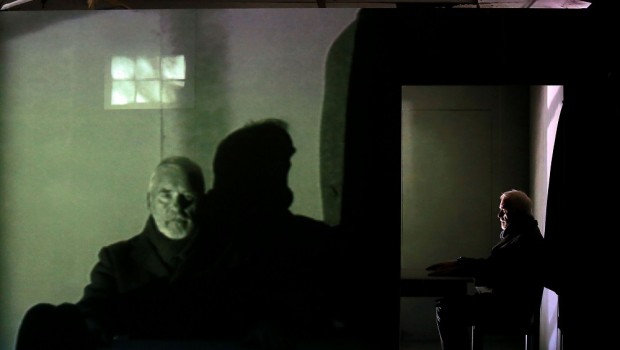 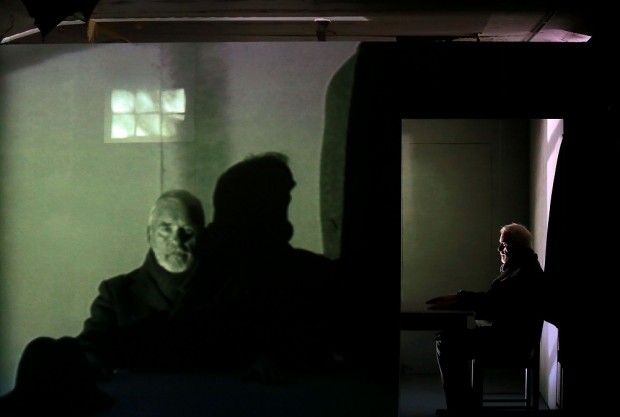 Rain pours steadily and the water lies in pools on the road, shooting up like silver ribbons as the bus moves through the Fermanagh countryside. The hills of Donegal flank the route to the left. They say that Lough Erne lies in Fermanagh half the year, while Fermanagh lies in Lough Erne the other half; no matter, the wet July weather can’t dampen the enthusiasm of the Samuel Beckett fans heading to a secret destination to see a theatrical performance of the playwright’s final prose piece, Stirrings Still.

The secret locations for performances have become a popular facet of the Happy Days Enniskillen international Beckett Festival. These mystery tours open up the surrounding countryside to festival goers, broadening further still the Beckett experience with intimate, beautifully curated events – one-offs that frame Beckett’s work in most imaginative ways.

Attendees of performances of Stirrings Still on the previous two days were asked to keep the location to themselves and seemingly they did, for the bus’s arrival at Castle Caldwell takes everyone by surprise. The tumbledown seventeenth century castle has been reclaimed by nature so the venue for Beckett’s final work is the second-floor room of a stone outhouse of slightly more recent vintage.

Inside, an old man (actor Ian McIlhinney) sits utterly motionless at a table, which is half hidden by a partition wall separating ‘stage’ from audience. Just as in Frankie McCafferty and Vincent Higgins’ still posture in Ohio Impromptu on Devonish the day before, the old man’s motionless pose, artfully framed and illuminated, conjures the atmosphere of an oil painting.

Franz Schubert’s aching ‘Nacht Und Traume’, accompanied by rain on the roof, creates a cocoon-like atmosphere of serenity inside the small room.

The narrator’s voice – the old man’s inner monologue – describes how this old man watches himself rise from his table and go; again and again he disappears and then reappears. It is day or perhaps night. To the old man it matters little.

We learn that “Darly had died and left him”, and it appears that his own days are short in number. His will too, with “nothing to wait for”, flickers like a weak candle flame starved of oxygen: “Head on hands half hoping that when he disappeared again that he would not reappear again and half fearing that he would not.”

The old man sees his own hands on the table “at rest after all they did.”

Director Netia Jones’s film projection reveals the outside world and McIlhinney rises slowly from the table to stand in the swaying grass, as though tasting the air for the last time.

The anchors of time, place and the light have been uprooted and the old man questions his sanity. Film reveals the other half of the table and the ghostly apparition of the man rising to go, once, twice three times – not to reappear.

As his mind unravels his inner voice grows fainter. Yet one thought, his final thought, is clear: “Time and grief and self so-called. Oh all to end.”

Jones’ direction provides a beautifully sympathetic canvas for McIlhinney’s moving performance; over the three days of Stirrings Still several audience members have left the room in tears. It’s perhaps surprising that Stirrings Still is not better known, not merely as Beckett’s final prose work but because it surely carries an emotional weight far beyond its short duration.

Stirrings Still may have had its genesis in Beckett’s one-off play for German television Nacht und Träume (1983) and certainly Jones and McIlhinney’s spellbinding production makes a persuasive case that this moving late work conveys most impact in a theatrical setting. Particularly in an old stone house in the rain in the middle of Fermanagh. Ian Patterson