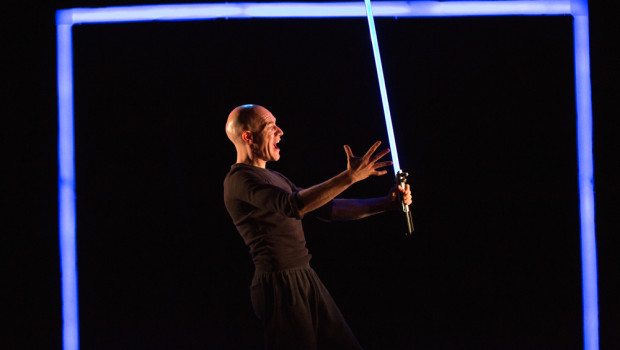 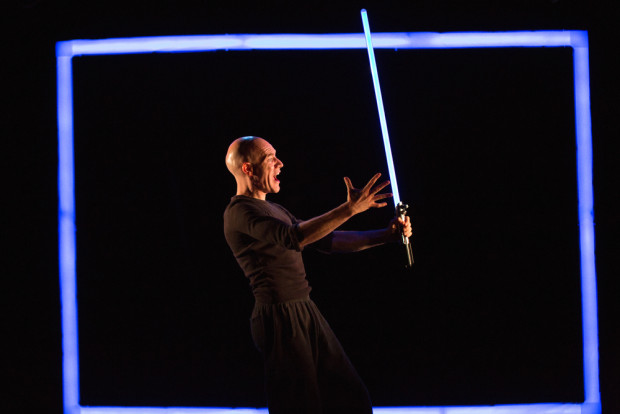 Donning the name of one of literature’s most famous epic poems, Bryan Burroughs’ Beowulf: The Blockbuster packs its quaint tale with an emotional punch worthy of the title.  Burroughs, the playwright and star of his own one-man show, premiered this one act two years ago at Dublin’s own fringe festival before taking it on the road across Ireland, the UK, France, and even as far as Australia

during which time he’s claimed several honours and esteemed recognition.  Now the work triumphantly returns to Dublin for another limited and popularised engagement.

The show begins with a small spectacle of lights heralded by the iconic musical themes from George Lucas’ Star Wars films, a titillating design choice for such a cheekily epic show title.  Burroughs enters the stage in plain black garb and begins narrating as a seemingly omniscient foetus.  Floating carelessly in the womb, the unborn babe explains his predicament on the verge of birth and his father’s frenetic mental state in the outside world.  ‘Shitting himself,’ Burroughs says.  Effortlessly, he quite literally glides from role to role, brandishing his background in movement and physical theatre. As Burroughs situates his ability to distinguish characters in tone and physicality, he whisks the house away on a tale depicting his dad, the jittery man in the delivery room, as a young boy in the care of a single, sickly father. There in the realm of familial past, one momentous night is portrayed. The dying man goes to tuck his son into bed perhaps for the last time, and in an effort to impart all the wisdom he can on such short notice, he recounts the tale of Beowulf, abridged and amended by the little boy’s imagination, e.g., lightsabers entering the store of the mythical warrior’s arms.

The story of Beowulf, as performed by the ailing man and his son, metatheatrically becomes a play within a play, with a further array of characters for Burroughs to animate. Australian and Scottish accents make their way into the catalogue of roles, allowing Burrough’s talents to alleviate the emotionally weighty material of the entire piece.  Similar efforts in metatheatre were seen at last year’s Tiger Fringe Festival in Evan Webber’s Ajax and Little Iliad, in which Webber, also star of his own work, prompted his characters to perform another ancient epic to illustrate their present hopes and emotions.  Like Webber, Burroughs effects the device with just the right touch without garishly shoehorning it in.  By marrying the years and ages covered in one epic to the brief pause of one crucial night, he poignantly explores how time is of no consequence when striving toward the core values of a human life. The dying father’s bravery in one farewell manages to match Beowulf’s in a thousand battles. At moments when playing the young boy, Burroughs responds to this sharing of wisdom with too much self-awareness for a nine-year-old, even in such trying circumstances.  Still, the entire piece seems to be an exercise in reflection.  Perhaps the boy’s frustrated answers are as much delivered in retrospect as they are in a present moment.  Nevertheless, whatever emotional weight Burroughs lays on his audience, he still embodies the portrait of an upbeat state of mind, recalling his audience not to mourn life lost but to think cheerfully and gratefully on times had and lessons learned. Joe Madsen