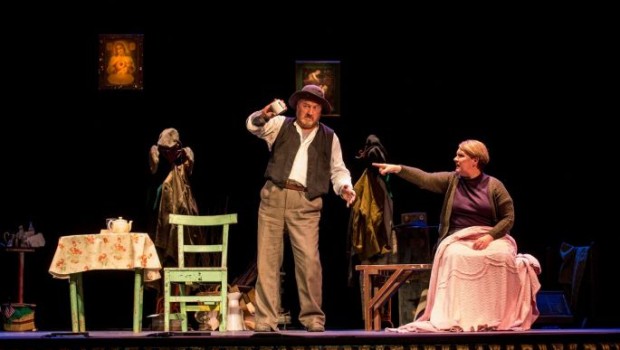 The Matchmaker @ The Gaiety Theatre, Dublin 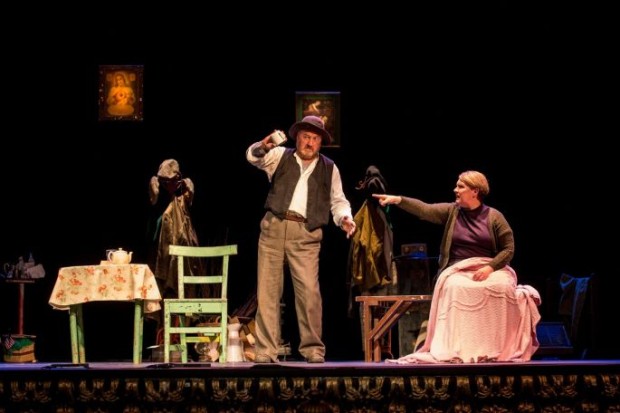 Showcasing two talents of Ireland’s most celebrated comedic actors, the Gaiety’s production of John B. Keane’s The Matchmaker delights audiences in its old-school, but enduring comic tropes. Adapted from Keane’s novella by Phyllis Ryan, the play tells the story of Kerry-raised matchmaker Dicky Mick Dicky and the would-be romantics seeking his help to find a partner. Each character is given a series of letters performed in monologue throughout the two acts, with Dicky and the males played by funnyman Jon Kenny and Dicky’s sister Marge and the females by boisterous leading lady Mary McEvoy. This elderly array of rustic Irish hopefuls lends a versatile palette to these character actors’ abilities. Kenny changes colours like a chameleon onstage, ranging his roles from a highfalutin, bisexual English gent to a fast-talking Irish jockey who’s eager to break in a free-spirited mare, as he claims. The comparison of horse-training to sex plays on end in Keane’s tongue-in-cheek comedy. Though the aged humour of the piece packs a conspicuous wink and nudge throughout, Kenny and co- star McEvoy breathe resilient life into the language and setups, never failing to elicit raucous laughter from the house.

McEvoy’s characters seem a bit less varied than Kenny’s flexibility across his parts. Each of her parts seems to fall in line with the surly Fionnuala Crust whose fury with Dicky’s first two dismal matches is not allayed until she settles on the aforementioned zealous jockey. McEvoy’s portrayal of Dicky’s sister Marge strays most from the pack in both temperament and dialect. However, being a Philadelphia woman, her New York accent seems misplaced, a sad trend throughout film and TV portrayals of Philadelphians (re: Rocky, The Sixth Sense, Silver Linings Playbook). Yet McEvoy’s comic timing proves a pillar on which the entire production stands, and together with Kenny, the two create a visceral energy which is charming to behold. Ryan’s adaptation of Keane’s text does lag at points, being a series of consecutive lengthy monologues, and given the show’s rather whimsical concept, the show’s length at large almost foils the production’s efforts. Moreover, although Kenny and McEvoy sharply punctuate their ensemble roles with refined technique and skill, one nevertheless gets the sense that these seasoned actors in a seasoned playwright’s work are not challenging themselves. Though the play sends home its promised entertainment, no boundaries are pushed in this canonical work. Still, moments of variety spice the piece with an emotional mix. The episode of Dicky’s care for his dying wife and his subsequent depression upon her death prove a poignant moment at which the house is gently eased into a moving reflection on love, loss, and loneliness.

Underscored by subtle, yet pointed light and set changes, this melancholy period in the otherwise comic show is delivered with just the right touch and picked up again with just the right kind of laughter. Keane’s text almost smiles in reminding that despite the pain, it’s better to have loved than not to at all. Through and through, these practiced performers make Keane’s Matchmaker a charming night out to the theatre. Joe Madsen