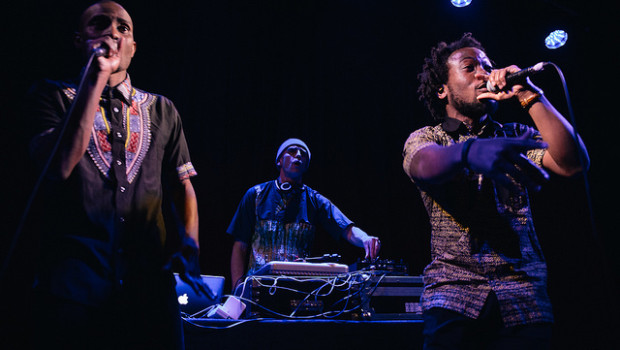 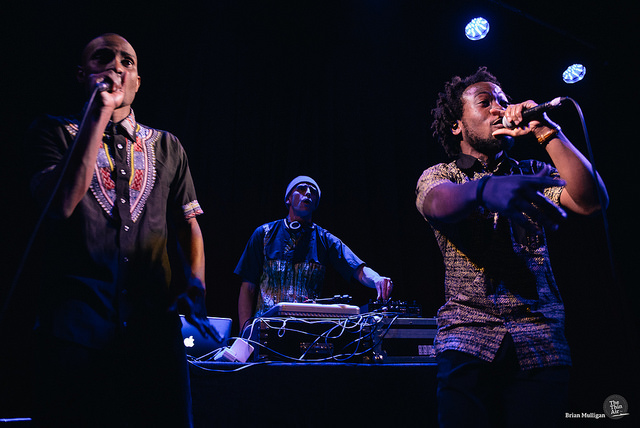 There’s been something special brewing in Ireland for the last year or so. If you’ve been lucky you’ve caught glimpses of it here and there, or heard the rumours; something big from the Mid-West. Something new.

But after nearly a full year of hor d’ouvres in the shape of feverish shows and tantalising single track releases one of Ireland’s most exciting bands finally has a full album to offer. And while it’s justifiably whipping critics and fans into a frenzy, many know that for the full Rusangano Family hip hop experience you’ve got to see it live.

So while the album launch is the reason, and in itself represents a crucial landmark for the band and their fans, there need be no special occasion to catch the trio. They are the occasion.

The choice of the Sugar Club raises a few eyebrows; its asymmetrical set up of front-of-stage mosh space and sophisticated seating is not for every band, but those in the know nod their heads sagely and attempt to mask a wry smile, ‘I think it will be ok,’ they say. But before their confidence can be tested it’s time for the support; tonight in the form of electronic duo Ben Bix and Feather. As the room slowly begins to fill they seem to run a gauntlet of musical teething problems. But even through the sonic wobble of the vocals you can hear the quality, something like FKA twigs or a brooding Jonii, and the musical palette of atmospheric house and EDM acts like Matmos and Jamie XX. Once they hit their stride the groove is undeniable and the vocals, shot through now with a whacked-out tribal folk feel, are spot on. 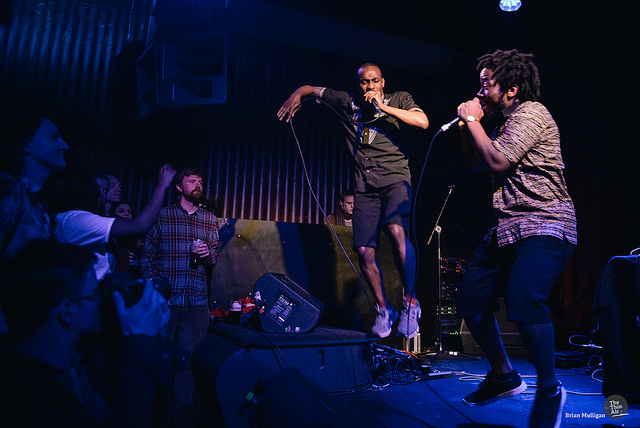 One second the stage is vacant and the next the main act are there. For a crowd more used to a half hour of tinkering and ting, ting tiiiiiing! tune ups it’s a miracle, but there’s no time for surprise. The Rusanganos aren’t on stage, they own it. The show doesn’t start, it explodes. The trio launch into a four song run barely stopping for air. It’s a golden blitz of the album whose birth they are celebrating, and as tracks that have only been out for a week are received like classics it’s the perfect capital city recognition of their critical mass. Yet while the exhilaration of beat laden tracks like ‘Lights On’ and ‘Love in a Time of War’ may wash the crowd in a dance-hall euphoria they’re wonderfully counterpointed by two passionate acapella sections. These parts, theatrical yet vitally poignant, are the bands manifesto. The breakbeats and the bouncing may be the show, but this is the message.

Yet they only bring it down to bring it back up. In the closing passages the group are a thrashing beast and GodKnows is up on the tables (‘See,’ the wry smile says) while they’re joined by Guide and windings’ Steve Ryan on stage.

After one single encore the band leave the stage but the sweaty crowd keep up the chant for five more minutes before they collapse into themselves, tired and happy in a way that few life acts can leave you. Rusangano Family aren’t any old band. They’re a force of nature. Eoghain Meakin