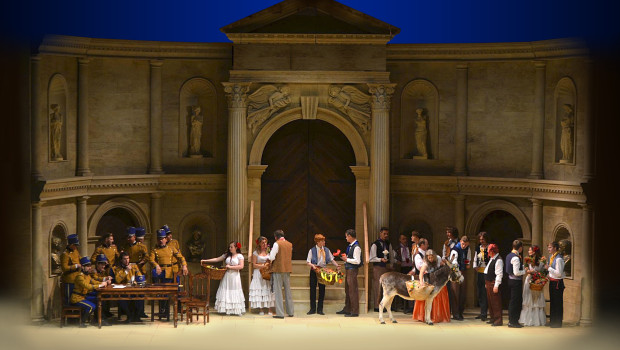 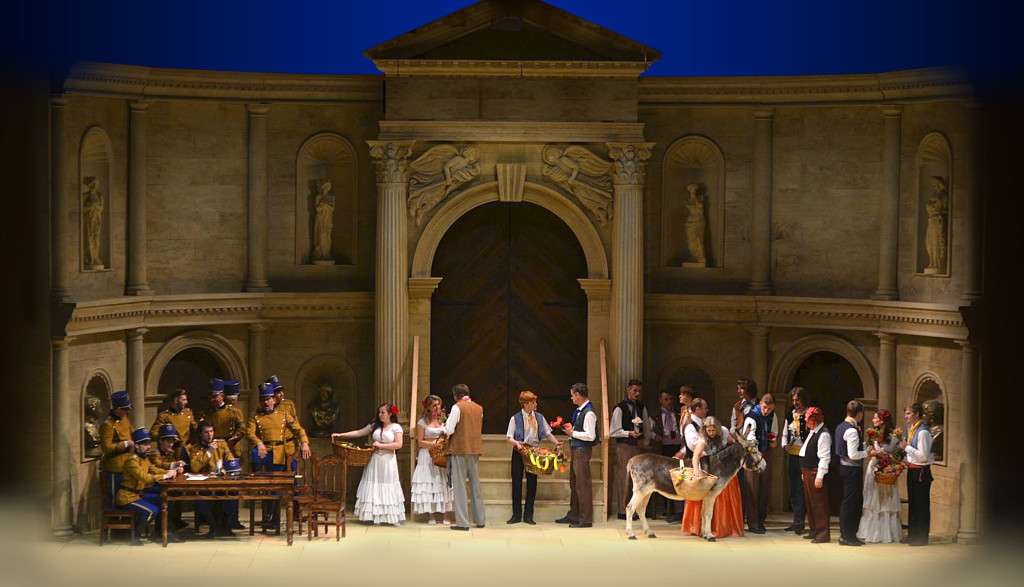 Lust, jealousy, betrayal and murder have always made for potent story-lines and there’s undoubtedly something of the Greek tragedy about George Bizet’s much loved opera, Carmen.

Yet despite all the ingredients of a modern-day soap melodrama played out to a stirring musical score – and all condensed into a couple of roller-coaster hours – the National Opera and Ballet Theatre of Moldova’s performance of Carmen comes across as conservative and a little stiff.

There’s no doubting the success of award-winning director Ellen Kent, whose colorful staging of the world’s great operas and ballets has been packing them in across the UK and Ireland these past two decades. However, little about this production offers any sense of a fresh, modern approach.

Elegant Seville architecture dominates the stage of the Waterfront Hall, though remains largely unchanged during the four acts, which flit, theoretically, from a square to an inn and from mountainside to bullring as the tragic Don Jose (Vitalii Liskovetskiy) is led a not-so-merry dance by the gypsy Carmen (Liza Kadelnik, of Romanian National Opera) –one of opera’s great femme fatales.

Other performances of this production across the UK since February have featured a white Andalucian stallion and rescue donkeys, though no animals grace the Belfast stage this evening. It’s perhaps just as well, as such realism might have put in starker relief the slightly wooden acting.

Kadelnik in the lead role is the notable exception, exuding the sensuality, the assertiveness and the teasing provocativeness that seduces Don Jose – and every red-blooded man who casts eyes on her.

Yet it’s all a little too clean, and sparklingly so. The beautifully attired women from the cigarette factory look like they’ve just skipped through a meadow, rather than having come from a gruelling shift for minimum wage. Even suspending disbelief – and after all, the opera is a just another entertaining form of escapism – the characters are all a little too neat. In the original libretto Carmen is arrested for slashing the face of a co-worker in the cigarette factory, but here the affray amounts to no more than a little half-hearted pushing and pulling; some grime and blood would have made for a more visceral theatre experience.

Kent’s decision to have the recitatives that link the musical numbers sung as opposed to spoken – as was Bizet’s original intention – arguably also robs the narrative of some of its gravitas.

Nevertheless, the musical performances are outstanding.  Kadelnik, Liskovetskiy, Alyona Kistenyova (in the role of Micaela) and Iurie Gisca (incarnating Escamillo, the torredor) sing with a passion and conviction that’s little short of mesmeric.

Highlights are many: Carmen’s Cuban-tinged ‘Habanera’; her seductive aria that so beguiles the soldier Don Jose that he aids her escape following her arrest for the aforementioned altercation in the factory; the animated gypsy song, which unleashes the most impassioned song and dance of the performance; Gisca’s proud, swaggering ‘Torredor Song’ – these are just a few of the standout moments.

The twenty-five-piece orchestra of the National Opera and Ballet Theatre of Moldova and the National Philharmonic of Moldova, under the baton of conductor Nicolae Dohotaru, also excels.  Larger orchestras over the years may have accentuated the drama of Bizet’s score but the Moldovan orchestra captures the emotional nuances – the sense of foreboding, the sexual tensions at play and the intermittent light-hearted relief – extremely well.

Some will no doubt argue that this production of Carmen is visually pleasing. Yet the vocally and orchestrally arresting performances surely demand more empathetic staging – in short, a greater shock factor that reflects the opera’s violence. The final scene on the Waterfront stage, where Don Jose’s raging jealousy sees him stab Carmen to death has, unfortunately, all the menace of a glove puppet’s assault.

Looking to the future it’s difficult to see how a younger audience, one so accustomed to graphic violence as entertainment, will be able to relate to such sanitized simulations.

Carmen and Don Jose are two of opera’s great tragic figures, though a greater, real-life tragedy was the death of Bizet before he could bask in Carmen’s world-wide popularity. Experiencing Bizet’s rich orchestral score via the conduit of these excellent singers and musicians raises the question, above all else, as to what further wonders Bizet might have conjured had he lived beyond the age of thirty six. Ian Patterson