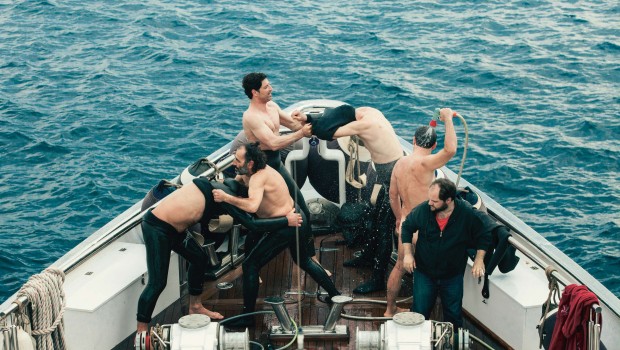 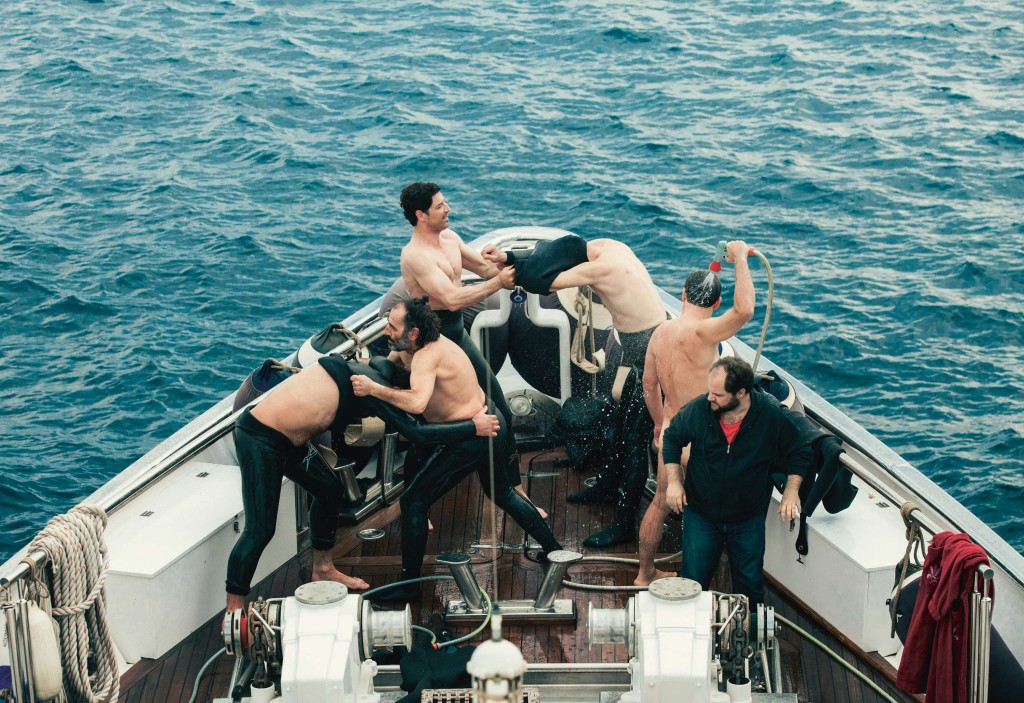 Dick size, both metaphorical and literal, is the subject of Greek auteur Athina Rachel Tsangari’s Chevalier, a pristine satire on machismo and the barely coded competition that animates how men relate to eachother.

A group of six men, still looking spry in their thirties, forties and beyond, are vacationing on a luxury private yacht in the Aegean Sea, a get-together organised by the eldest and most assertively paternal among them, nicknamed The Doc (Yiorgos Kendros). As their sojourn draws to a close, they decide to play a game to determine which of them is ‘The Best in General’, an extended series of tests and random observations in which they judge eachother for qualities like sleep posture, cholesterol level, phone call etiquette and, inevitably, erectile prowess. Whoever wins will be awarded a chevalier ring, to be worn triumphantly until some hypothetical future rematch. As the points build up and the lads jostle for position, reacting to any minor infraction with a frown and quick notebook scribble, their various resentments, jealousies and insecurities start to flare up, captured in Tsangari’s dry, observational approach.

In her 2012 film Attenberg, part of what was dubbed the ‘Greek weird wave’, Tsangari used an romantically clueless outsider to approach human relationships in almost anthropological terms, characters breaking into snarling animal contortions to remind us of the essentially weirdness of everyday rituals, learned by its heroine via secondhand instruction. The bestial subtext and standoffish visual framing continue here, where, under the fashionable turtlenecks, the men have barely evolved from the jungle doc primates that popped up in Attenberg‘s TV screens.

The ripe conceit and tight location is bursting with potential for screwball farce but is kept in check by Tsangari’s firm realism. As a result the film never really escalates in a satisfying way, but the lack of catharsis speaks to the unresolved, endurable nature of the vanity and self-regard on display. The film focuses on the inanity of the contest, petty comparisons delivered in deadpan dialogue and moments of minor absurdity captured in unfussy photography. The mundanity of the various trials – like the correct way of preparing a salad – has a dry wit and suggests that their contest, however ridiculous, is really just formalising how they already view eachother, a group bound together not by genuine affection but the orbits of family, commerce and shared demographics.

Chevalier doesn’t have quite the same intensity as Ruben Östlund’s Force Majeure (2015), which pivoted on a moment of intense humiliation, but shares an interest in the brittleness of cosmopolitan masculinity, especially when unmoored from daily domestic life. The backstories of the men – brothers, business partners, in-laws – are broadly drawn, making it hard to differentiate individual tensions, but most of them seem to have a comfortable existence, which renders all this Darwinian chest-beating even sillier. In the privileged air of the yacht, kitted in tasteful cream furnishings and an on-hand crew, ranking functions as another form of status anxiety. Gradually, the competitive spirit infects the lower deck: some of the funniest bits are the interludes of the staff in their cramped quarters, fielding predictions for the game’s victor and, because they’re men as well, instigating their own version.

Chevalier is smart and enjoyably cynical but isn’t very interested in momentum. When late in the third act one of the men gets drunk and starts calling The Doc’s carefully self-groomed son-in-law out on the shambles of his life, it feels like an artificial way of spiking tension, and not much comes of it anyway. The film, for all its insight, is not audacious enough to really rock the boat. Conor Smyth

Chevalier (18, 105 min) is screening at Queen’s Film Theatre and the Irish Film Institute.