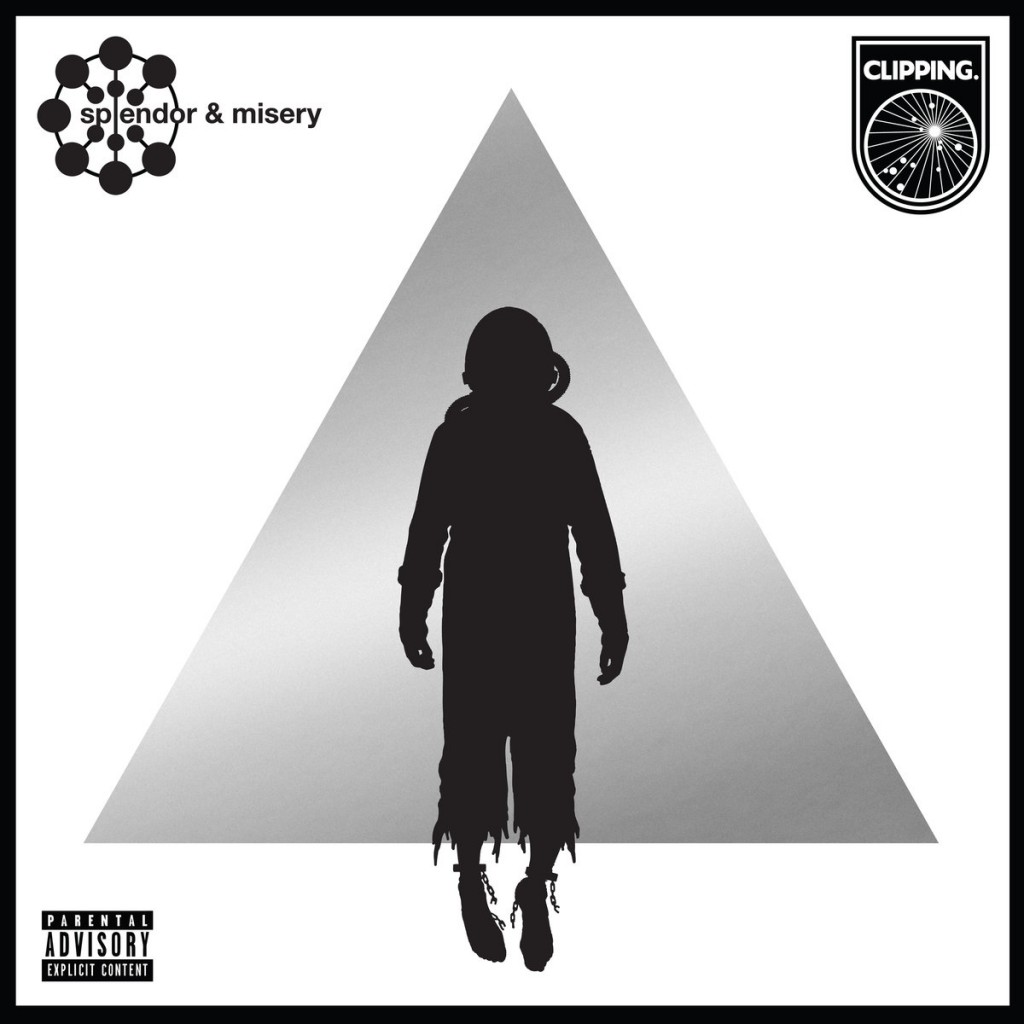 For those who don’t know Clipping, they are an LA based trio who single-handedly make up the most prominent hip-hop and avant-garde contingent of legendary label Sub Pop. Since their critically received label debut CLPPNG the group have become a reckonable leftfield force, creating music that is challenging, beguiling and academic all at once. While their last EP Wriggle may have been little more than loose tracks after the release of their LP it continued, musically and verbally, to chronicle humanity’s burnt suburban landscape where society is little more than its bodily functions and lust for cheap thrills and short term gains.

On the surface Splendor & Misery has everything one could want from a Clipping project. Rapper Diggs slings his jealousy inducing verbiage while producers Snipes and Hutson create music out of the very fabric of our lives. However, where Clipping’s previous releases may have handled a few loosely connected themes Splendor & Misery is a complete concept album. It takes place in a dystopian future where man has taken to the stars but also reimposed slavery. The action of the album follows the sole survivor of a mutiny and his mental state alone in space.

The concept is delivered with remarkable focus and clarity. All the music is built from the sounds the survivor is meant to be hearing, which is impressive but also the problem. Snipes and Hutson do a fantastic job of catching the creaking hull of the ship and the terrifying void of space but their dedication to the concept is such a limiting factor that the joy of CLPPNG is almost wholly absent. Diggs is as on form as usual and amongst the dense, dense world building and his usual aptitude for storytelling are real gems in the lyrics. Yet even he feels the need to restrain his usual whipcrack gymnastics that have become a staple for the band. For that reason tracks like ‘All Black’ are engrossing on the first listen but then rapidly lose effect as the ear searches desperately for anything other than the meaning of the words to grab on to.

Tracks like ‘Air ‘Em Out’ and ‘Baby Don’t Sleep’ are perfect expositions of Clipping’s mastery of the form and the delivery of their vision but there’s a lot which doesn’t work as well. The numerous interludes make sense within the reality of the album but musically they stop it dead, Diggs’ singing voice remains one of the few unimpressive things about him and ‘Break the Glass’ falls somewhere between dramatic audio novella and nu-metal heard through a diving bell.

Splendor & Misery has a lot in common with Xiu Xiu’s mesmerising …Twin Peaks; it’s interesting, literally horrifying and can be an endurance test but where the latter has balanced its musical experience with its dominant theme, Splendor & Misery is subservient to it. It has the wonderful aesthetic of the Bioshock series of video games but little of the fun.

This is not a dip in Clipping’s talent trajectory but rather a focus so laser sharp that it’s intimidating. No doubt this can and could be lauded as a work of genius but it’s not nearly as interesting as what Clipping can do when focused on less grand objectives. Eoghain Meakin