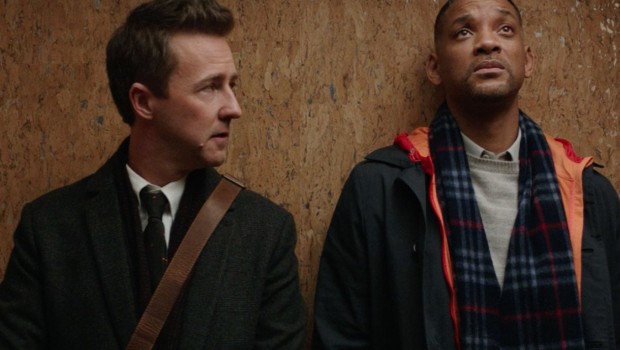 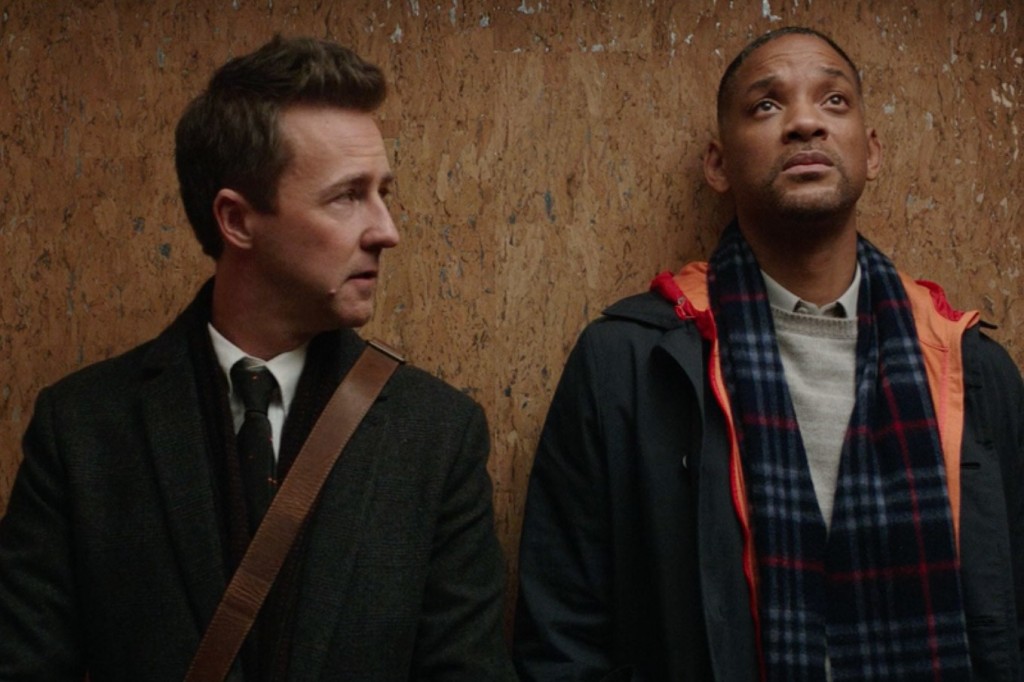 Like a sharp boot to the arse on your way out the door, David Frankel’s Collateral Beauty closes a miserable, baffling year with a miserable, baffling Christmas Carol, a clump of holiday treacle so toxic they should hand out hazmat suits with the tickets. Will Smith stars as Howard, one of those charismatic marketing guru types who misinterprets selling products as a noble creative calling. It’s been two years since the death of his daughter, and he hangs around the office in a solemn, silent funk, ignoring important company business and building elaborate domino displays, only to dramatically topple them in petty expressions of sublimated anger, sequences captured with embarrassing dramatic urgency. It’s the sort of metaphorically empty visual flourish that puts one in mind of Jean-Marc Vallée’s Demolition from earlier in the year, another misjudged, shallow movie about a man who copes with bereavement and depression by acting out in eccentric quirks.

Howard’s friends and company top brass, played, in an astonishing waste of talent, by Edward Norton, Kate Winslet and Michael Peña, have had enough. The stagnation cannot continue, especially since the chance of a lucrative corporate buyout has emerged. So, they do what anyone in their situation would: they hire a trio of actors to confront Howard, playing the part of universal abstractions that he has been mailing handwritten letters to. Helen Mirren is Death, Jacob Latimore is Time and Kiera Knightley is Love. They hire a private investigator (Ann Dowd!) to video Howard’s reactions to these spirits of the cosmos, so they can digitally remove the actors and convince the company’s board of his mental incompetence. These are, remember, supposed to be his friends.

Collateral Beauty doesn’t have characters, it just has a series of maladies in need of a cure. Howard is grim with grief, sullen and sad, cycling his bike into traffic because FEELINGS. Whit (Norton) can’t connect with his young daughter, still angry with him for cheating and breaking up their family. Claire (Winslet) is feeling the maternal tick-tock and questioning her potential value as a mother. Simon (Pena) has cancer and can’t tell his family. Each of the three becomes attached to one of the actors, who are able to offer packets of wisdom that speak to their situation. It is also like they’re not there to help Howard, but to help his friends. Huh.

Meanwhile, Howard, shocked out of his daze by these strange encounters, begins visiting a support group for parents of deceased children, where he becomes close with the group co-ordinator, the beatific Madeleine (Naomie Harris). She tells Howard a story about when she was visiting her dying daughter: a hooded woman sitting beside her in the corridor, sensing her distress, told her to try to appreciate the ‘collateral beauty’ in the world, a phrase that has helped her find some joy amongst the trauma. Here’s the issue: ‘collateral beauty’ isn’t a thing. It’s not a phrase. No-one would ever say that to anyone. It’s a screenwriter’s fancy. Try saying it out loud. It sticks in the gum like a shard of glass.

The conceit isn’t awful, it’s basically Dickens: A Christmas Carol with cancer kids. But filling his script with talking abstractions means Allan Loeb is really asking for it. If a stock theatre device like that is to work, it must be brought to life with urgent character and emotional work, an ingenuity that seems beyond the writer of Here Comes The Boom. Scrooge, for all his meanness, had a full and tragic inner life, one that made his torturous conversion by the Christmas ghosts believable and morally necessary. Howard’s sadness, by contrast, is uniform and paper-thin. Smith has one strong moment when he confronts Mirren’s avatar, raging against all the world’s cliches about death, useless to him against the reality of his pain. But the film cheats, outrageously, by serving him an equally cliched happy resolution, via a twist so obvious, so insulting to the reality of how adults actually interact with eachother, that you twist in your seat in fevered disbelief as it looms ominously into view, a Star Destroyer of unforgivable sentiment.

The whole production is sort of unbelievable, and another in a string of Smith’s questionable professional choices. Perhaps he needs the Ebenezer treatment himself: on Christmas Day morning the spirits of After Earth, Suicide Squad and Collateral Beauty appear at his bedside, pleading with the man who was once Hollywood’s most likable matinee idol to ditch all this soft-focus emotion and pretentious thematics and do something, anything, fun again. Maybe. It is, after all, the season of miracles. Conor Smyth