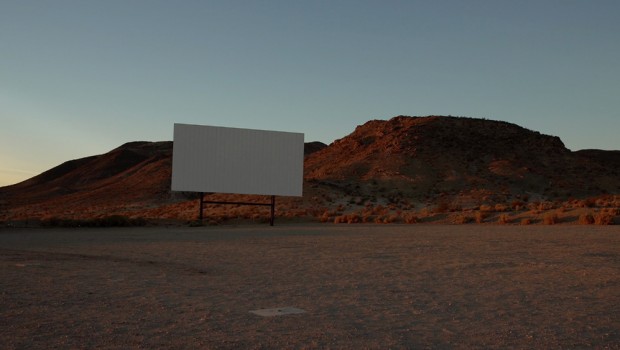 Picture This: The Night @ The Model 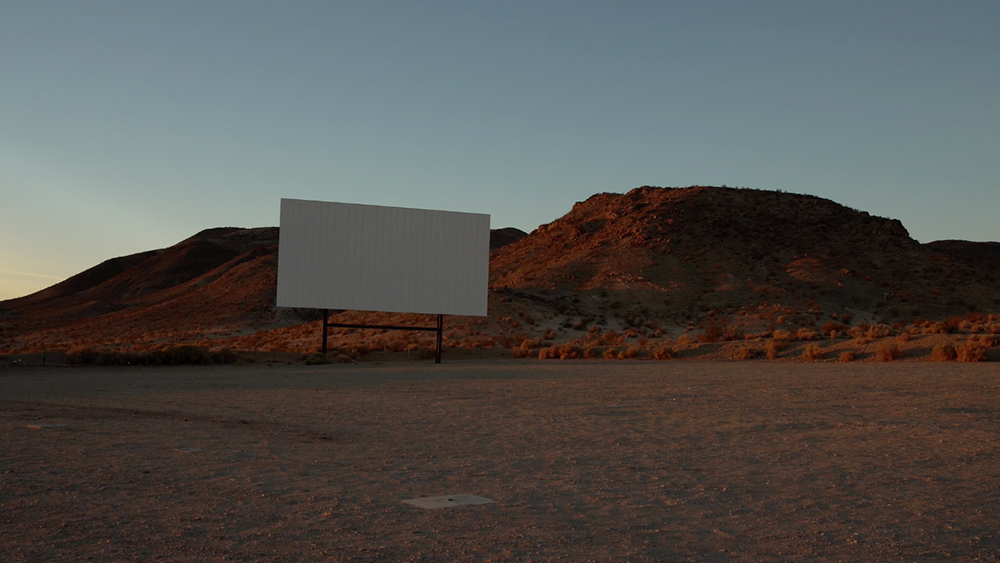 What: The Night
Where: The Model, Sligo
When: 24th February – 16th April
Words: Rebecca Kennedy

It would be unwise to assume that the physical size of an exhibition space would act as a limitation to the quality of work it beholds. Seen as the majority of assumptions spring forth from our subconscious, it is oddly fitting to hold such presumptions when visiting Alexandra Hopf’s exhibition, The Night in The Model, Sligo. With motifs ranging from psychoanalysis, surrealism, modernism and the construction of art history & mythology, this capsule exhibition escapes it confines and embodies a multitude of complex, interlocking themes and looks to dispel any presumptions.

What is the most striking aspect of The Night is the minimal aesthetic that the Berlin-based artist has utilized to create her visual narrative. Each object, be it Albert Giacometti’s text The Dream, the Sphinx, and the Death of T, to his film installation Giacometti in the desert, is meticulously composed in a precise choreography to tell a distorted and disconcerting narrative. Self-referencing plays a key role in The Night, with Hopf splicing Giacometti’s text’s beginning with: “Terrified, I noticed an enormous furry brown spider suspended over the foot of my bed, clinging to a thread that descended from a web right over the bolster,” and ending with: “At that moment I dreamed that I woke up…” This reversal of beginning and end sets the tone for the compulsive looping of themes throughout the exhibition & manipulates Giacometti’s horror into an inescapable, vicious cycle. 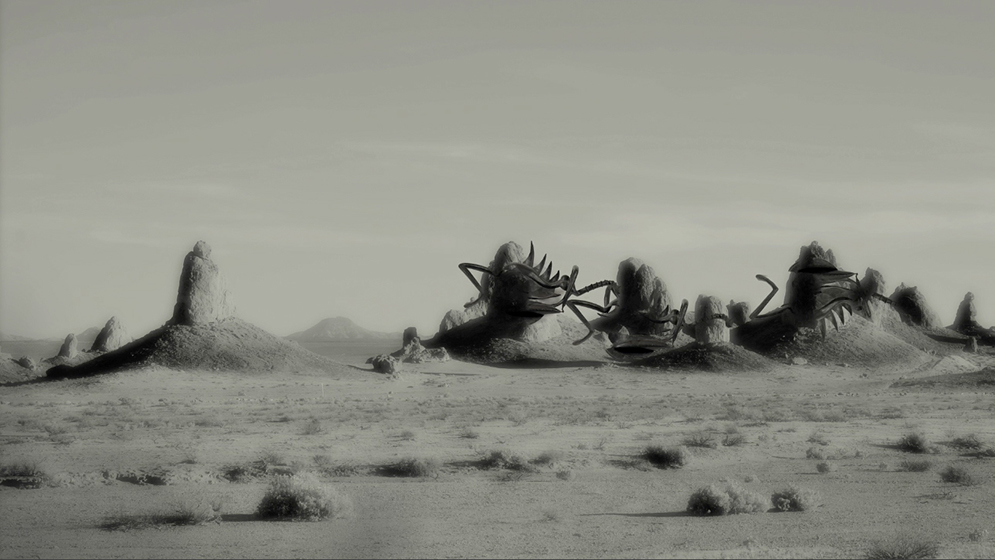 Atop the entrance of the exhibition Hopf has placed a red neon sign entitled Sphinx, and serves as a key visual clue that you are trapped inside. Framed by twin arrows arrows, pointing in opposite directions, the sign communicates both the circular motion of Hopf’s work as well as the patterns of subconscious thoughts that psychoanalysis seeks to reveal  and treat. Sphinx is a recreation of the original sign that hung above an infamous and eponymous brothel that attracted the Parisian intellectual and artistic elite throughout the 30’s and 40’s. Giacometti was present the night it closed, in October 1946, and it was on this night that he had his arachnid nightmare which he jotted down in a feverish dream of imagery – reminiscent of surrealist techniques.

To the left of the Giacometti’s text is Space Time Suits for Giacometti, a sextet of prints depicting the TuTa, an overall designed in 1920 by futurist Ernesto Michallellas under his pseudonym Thayaht. Here Hopf investigates art history and the selected neglect of certain mythologies. The TuTa was designed as a functional fashion piece for all and to insure its accessibility to the public, it’s pattern was published in the Newspaper La Nazione – ironically wearing the TuTa became a fad for Florentine high society rather than the masses. Hopf has recreated these print advertisements by replicating the Michallellas’ TuTa, replacing traditional fabric by stitching together fragments her own paintings.. In Hopf’s sepia tone imagery, a male figure stands with his arms stretched out, his TuTa splattered with white paint. The chaotic nature of the pattern displayed a reference to Giacometti’s text, the paint mimicking the lines of a spider’s web and the infestation of thoughts behind The Night. 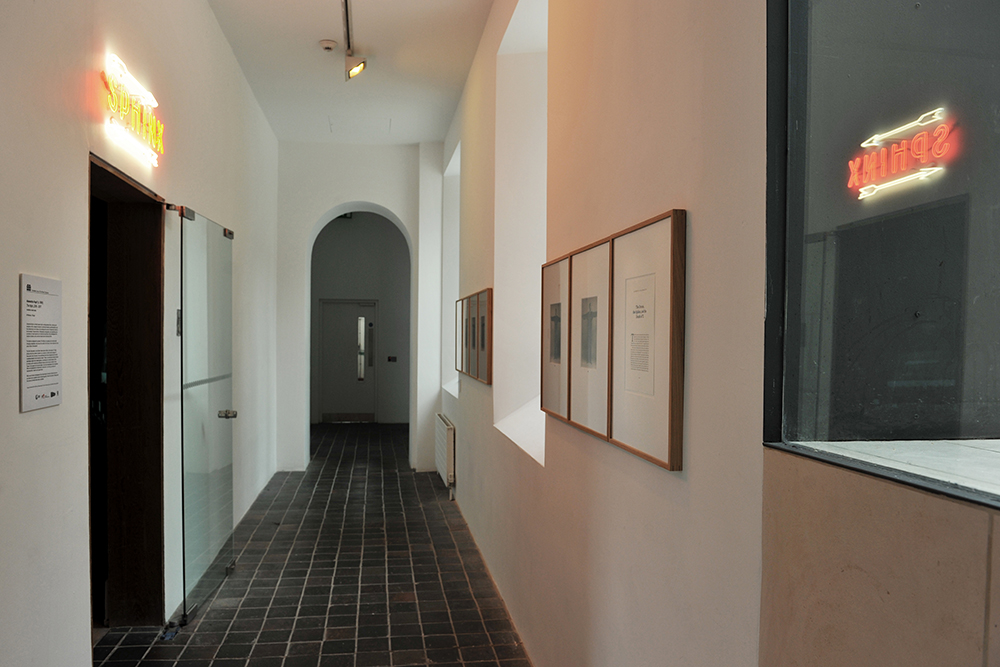 Hopf’s theory of disembodied art historical objects is also present in Space Time Suits for Giacometti. If The Night was designed to investigate lost or lesser-known mythologies, then Space Time Suits is the manifestation of the act of ripping an iconic object from its context, time & narrative. It proposes the question: what becomes of an iconic, timeless object once it is detached from its context? By isolating objects from their natural surroundings, Hopf creates a time capsule that challenges our notion of linear time.

The conclusive piece in Hopf’s exhibition is Giacometti in the desert, a video installation piece featuring footage filmed on the outskirts of the Los Angeles desert. Two large screens, suspended together have the monopoly of light in the darkened room. Joshua trees, which are thought to be some of the oldest foliage in the world, and the harsh rugged terrain of the desert, are tightly cropped, forcing the viewer to be partially unsure of their surroundings. The film is narrated by a sleek, commercial voice-over describing Giacometti’s intimate memories of his life. The relationships between the imagery and voice over as well as a dystopian soundtrack create an ambiguous tension & present questions of representation, matter and time. Here Hopf clashes two infamous mythologies: the romantic nostalgia of Giacometti remembering his life vs. the relentless nature of the American desert. The piece encompasses a sequence of seven days, time-lapsed from morning till night. Each frame is rigorously directed to evoke the existentialism Giacometti felt.

What is apparent in The Night is that Hopf’s narrative is not constrained by linear storytelling. Instead the audience is offered the visual cues of a labyrinth thought-process. Hopf executes a strict balance that reigns in any danger of one motif dominating the other. By selecting opposing objects, she creates dynamics that evoke an ambiguous tension that underlines the narrative. Art history is notoriously riddled with absences and holes; it is in this negative space that Alexandra Hopf inserts herself. By using the technical manipulation of images, objects and text she draws elements from the history that forgot them and weaves together a history of her own creation. And in doing so has executed an ambitious and enigmatic exhibition.

The Night in The Model continues until April 16th.
More information here. 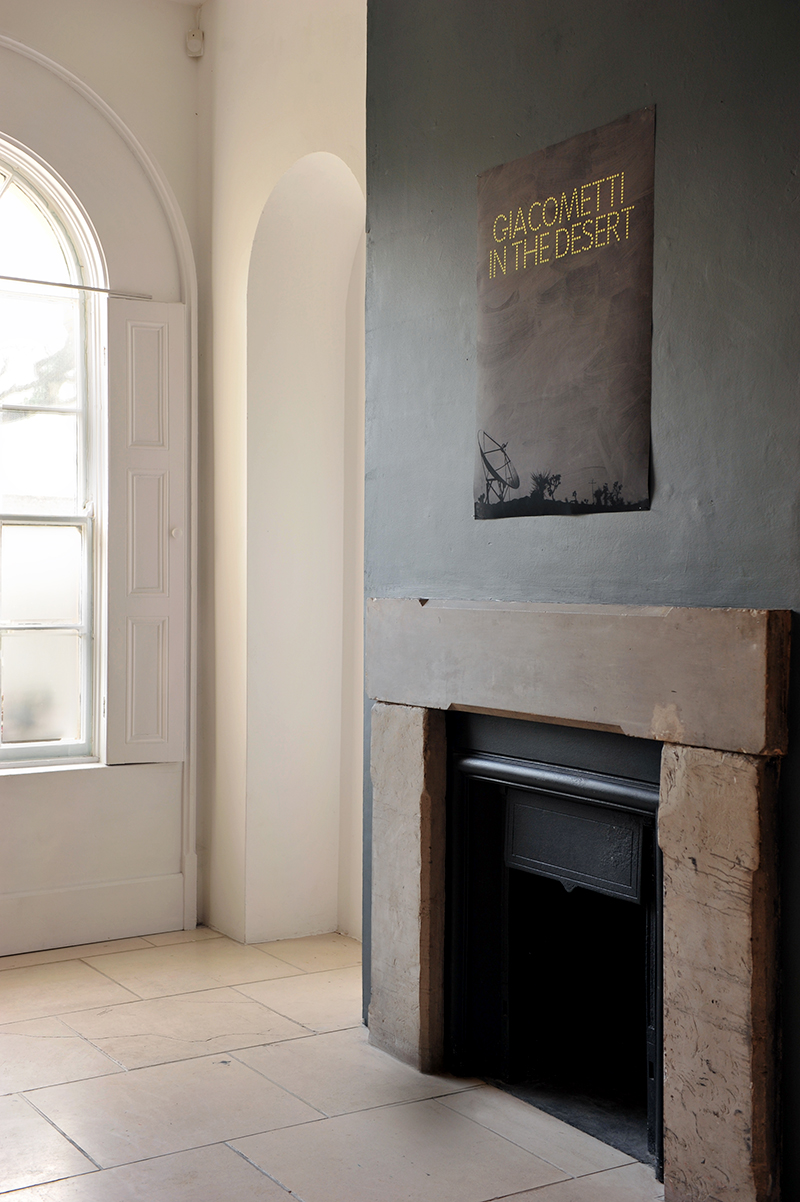