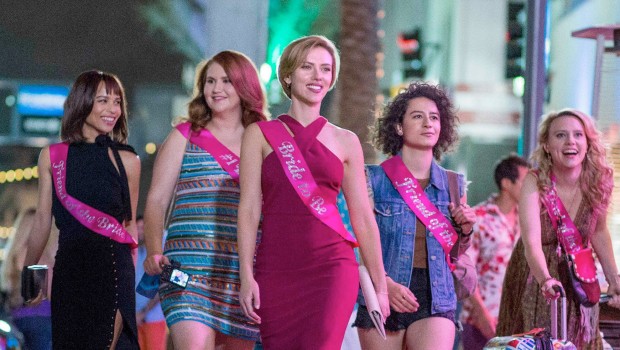 The one-two punch of last month’s raucous Girls Trip and, now, Rough Night, has sent columnist chins a-stroking about the mainstreaming of the ladette comedy and the gender politics surrounding it. To be fair, the films are noticeably similar in tone and structure, focusing on a group of quasi-estranged old college girlfriends who meet up for an escapist trip of partying, raunchy talk, and bonding. Some have changes in their life they haven’t shared with the others; others have unspoken tensions about adulthood’s diverging priorities. The friends drink, fall out, and make up. (And kill a stripper)

This is a comedy of chaos, or, more accurately, of kerfuffle. The girls stand around the dead body in their open-plan, glass-walled weekend hideaway, panicking and hyperventilating rather than just turning out the lights. Trying desperately to get rid of the body, or at least pretend everything’s fine, they find themselves in a kind of Weekend at Bernies game of prop-the-corpse. As is the way with this mad-thing-happens plotting, the comedy is primarily reactive.

Girls Trip had its problems with undisciplined gag construction, but benefited enormously from the comic motor of Tiffany Haddish, using her considerable energy to instigate action and momentum. Rough Night leans on mild panic and characters excitedly talking over eachother, but the thinness of the material means it never really moves. As with other recent female-heavy studio comedies like Snatched or Ghostbusters, the direction and the comic timing doesn’t rise to the level of the performers involved.

Around the edges other familiar faces make an appearance. Modern Family’s Ty Burrell and Demi Moore are the handsy swinger neighbours, while back home, Jess’ beta fiance Peter (Broad City’s Paul W. Downs, also co-writer) and his friends (Bo Burnham, Eric Andre, Patrick Carlyle and The Daily Show’s Hasan Minhaj) enjoy a genteel wine-sipped bachelor party. When a panicked Jess hangs up on Peter and doesn’t call back, he thinks the worst and drives through the night hopped up on Red Bell and pro plus pills. It’s the sort of story conflict that could’ve been easily resolved (Jess not ringing until they have resolved the dead guy issue feels a bit artificial), and doesn’t add to the gags, and the talents of Burnham, Minhaj et al. go untapped.

Rough Night is the first feature from Lucia Aniello, who has written and directed episodes of Broad City, and the leap shows in the the unsure steering. The expanding roster of female roles in studio comedies is a good thing; the trouble is studio comedies are on the whole not very good, and haven’t been for a while. Rough Night doesn’t change that. It’s just too rough. Conor Smyth