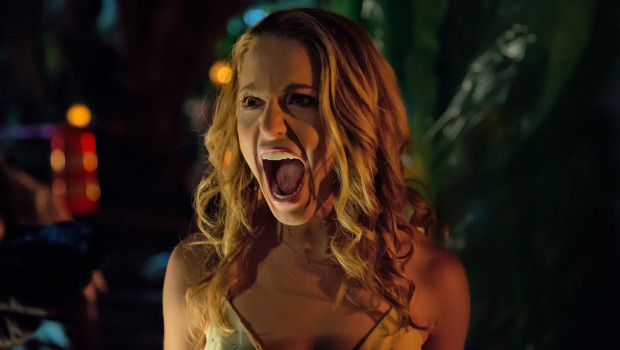 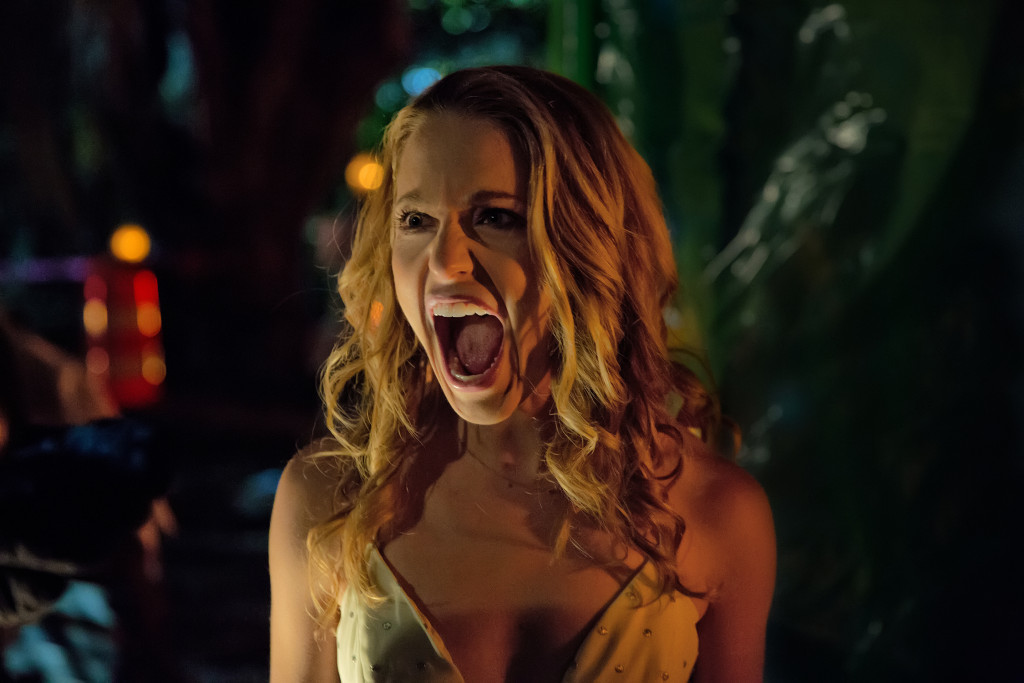 Happy Death Day is a minor slasher remix built around repetition, in a genre already prone to it.

Theresa, or ‘Tree’ (Jessica Rothe), is a sorority sister bi-atch who wakes up in a stranger’s dorm bed, hungover and late for class. It’s her birthday, the same as her late mother’s, and she’s in a bad mood, ignoring her Dad’s persistent calls and carrying on with a married professor. She seems to have been in a bad mood for a while. Late that night she gets cornered in a dark underpass on campus by a creep in a buck-toothed baby mask (the college mascot) and receives a hardy knife to the face, before shooting up, screaming, in the same bed from the morning, bumping into the same people saying the same things. Like a certain cynical weatherman, she’s caught in a time loop, forced to live, and die, again and again, until she can figure out who is doing all this stabbing and learn a few life lessons in the meantime.

Scripted by former Uncanny X-Men scribe Scott Lobdell, whose last feature story credit was the culture-clash of 2005’s Man of The House, in which a scowling Tommy Lee Jones moved in with a bunch of cheerleaders, Happy Death Day runs through its concept with a superficial appreciation for slasher scares. Director Christopher Landon failed to make an impression with horror-comedy hybrid Scouts Guide to the Zombie Apocalypse (2015), and struggles here with holding tone and constructing effective horror scenarios.

A strong case of déjà vu pervades the film, for hero and audience alike. There’s the dum-dum-dum rhythm of an early-morning sequence (sprinklers, car alarm, frat guy falling over), which exists mainly so Tess can ‘predict’ them to prove her ordeal to skeptical love interest (a not-bad Israel Broussard). We’ve seen the time loop formula done in other films, like Source Code, or one-off television episodes, and it’s the latter that Happy Death Day feels like most of all; a high-concept episode of a glossy, medium-budget teen horror drama, with a limited visual style to match (when in doubt, Dutch angle). The central arcs of the story, in which Tree uses the self-renewing time to investigate the identity of her killer, and embrace the possibilities of being a better person, are thinly sketched, rushed through via montage.

The film is the latest post-slasher slasher interested in rehabilitating the Final Girl type, and a more genre-aware creative team could have pushed an ironic commentary on the Sisyphean franchise ordeals of the Sidney Prescotts of the world. Like Todd Strauss-Schulson’s The Final Girls (2015), it plays with genre expectations to tell a story about a girl and her love for her late mother, although Strauss-Schulson’s film, in which millennial teens find themselves inside a 80s summer camp slasher and have to survive using trope knowledge, has a firmer sense of mischief and a stronger emotional core.

Roche has some charisma, and it’s enjoyable enough watching her shedding Tree’s cold, eye-rolling exterior, even if her meanness is hardly Regina George territory (ignoring housemates, brushing off petition do-gooders). A cathartic scene in which she breaks down about the pain she’s been ignoring is believably done, but the road there is often clumsily trod (one of the mornings, full of pep, she just walks through the campus naked for no real reason). Happy Death Day feels like something that got through production on the back of its “I Know What You’re Going To Do This Summer” premise  and a pressing studio need to get some horror on the books for Halloween, but it’s not something you’d watch again, and again, and again. Conor Smyth