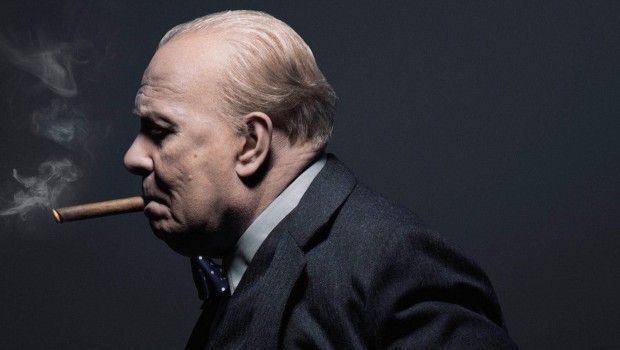 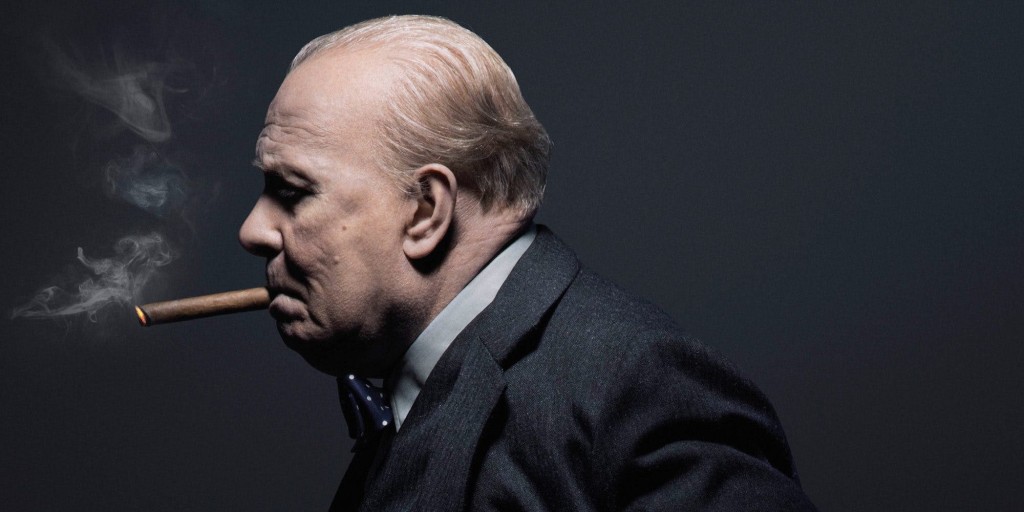 Even while he’s having a cinematic moment, Churchill keeps his distance.

Christopher Nolan weaponized celluloid machinery for the hyper-technical tension of Dunkirk, in which the politics of the coastal evacuation took place off screen, Kenneth Branagh’s naval captain standing in for the stiff upper lip of absent British authorities. Jonathan Teplitzky’s Churchill found Brian Cox’s wartime Prime Minister at the end of his tether on the eve of the Normandy invasion, tired and morose, struggling to maintain the brittle national morale. And now Joe Wright’s punchy Darkest Hour, the closest of the three to a traditional biopic, packing Gary Oldman in headline-grabbing prosthetics and giving him big, juicy speeches for the Oscar reel. But even here, the British Bulldog icon cuts a lonely figure.

Darkest Hour’s tight, claustrophobic chamber spaces contrast with the widescreen beach and sea vistas of Nolan’s film, but they make excellent cross-Channel companions, two sides of late May 1940, in which the spontaneous military collapse of Western Europe seemed, all of a sudden, a real possibility.

As Hitler’s tanks tear up Europe’s map in a ferocious dash to the coast, British Prime Minster Neville Chamberlain (Ronald Pickup) resigns, throwing open the leadership question. His assumed successor, Lord Halifax, played with snakish diffidence by Stephen Dillane (Game of Thrones’ Stannis Baratheon) passes on the job out of self-preservation, and the only suitable candidate left is Winston Churchill, First Lord of the Admiralty (Oldman), still bearing disgrace from his disastrous Gallipoli Campaign in the previous conflict.

Churchill convenes a cross-party War Cabinet to met the crisis and urges absolute resistance to Nazi terror, but the party’s old guard, eager to pursue peace negotiations with the Axis powers, plot his removal. The stranding of 340,000 Allied troops at the French beach, with no means of evacuation, means that the annihilation of the British army is imminent, with the threat of sea invasion following soon after. With the clock ticking, and appeasers circling, Churchill desperately seeks a way to save the men and, of course, himself.

Against the familiarity of the Churchill myth, enlisted in England’s habitual nationalist spasms, Wright uses tracking shots and zoom-out framing to emphasize Churchill’s isolation and strange(r)ness, and the weight of the historical tension on him. He’s introduced with a hard cut from the dinner room finery of the party establishment to a breakfast-in-bed fry-up, dictating letters in his dressing gown to new assistant Elizabeth (Lily James). It’s a setup of slightly sitcomy clownishness, one that was more in force in Churchill, which balanced hard-nosed mad uncle routines with moments of emotional ruin. In Oldman’s performance, Churchill seems at times a stranger even to himself, eyes off to the side, spilling out searching, unsure speeches.

An interesting subtext to Anthony McCarten’s script is how extraordinary moments demand extraordinary personalities, ones otherwise unsuited to regular state bureaucracy. Chamberlain and Halifax’s position — that defeat is almost guaranteed and the British Empire must secure the best possible terms for a negotiation in order to safeguard its existence — seems rational and pragmatic, but Churchill’s strength is his unreasonableness, his ability to look beyond immediate politics to what’s “true” in a broader, poetic sense. “You’re great because you’re imperfect” his wife Clemmie (Kristin Scott Thomas) reassures him.

Darkest Hour cloisters itself in the halls of power, the Westminster manoeuvring occurring in an almost parallel dimension to the European carnage. Taking the title literally, the House of Commons is shot like a crypt, and when King George VI (Ben Mendelsohn) visits Churchill’s bedroom at a crucial moment, a sickly palette of green and yellow suggests decay rather than triumph.

There’s some looseness with the record, like a slightly incredible trip by Churchill on the Tube to get the pulse of the people, in which the capital’s commoners vow to fight the Nazis in the streets if they have to, but it’s redeemed by a savvy, even opportunistic, Churchill using their sentiments to rally MPs around him. The drama builds to the ‘We shall fight them on the beaches’ speech in the Commons, and it’s a fine, stirring moment for Oldman, but the film keeps one eye on the political machinery around him. An unfortunate final line expresses the idea bluntly, but Darkest Hour makes a good case for the value of rhetorical game-playing, even when, especially when, quite literally everything is on the line. Conor Smyth

Darkest Hour is on wide release from Friday 12th January.