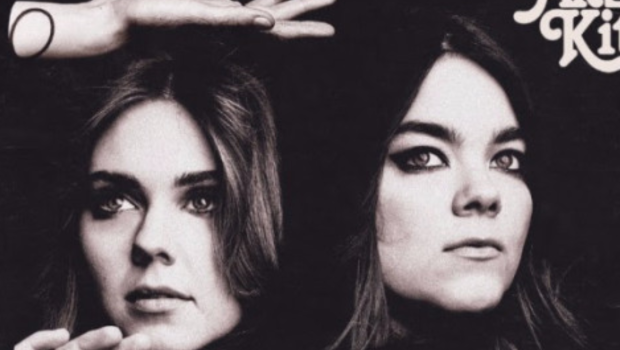 Written predominantly in the wake of a break-up, the aptly named fourth album from Swedish folk-duo First Aid Kit wades through the aftermath of heartbreak, self-doubt and loneliness, in the search to find something among the ruins.

Lead vocalist and guitarist Klara Söderberg had just broken up with her fiancé when she reunited with elder sister Johanna in Los Angeles to write their fourth record. She described the record to HMV as being about the ruins of a relationship, “How sad it is, but also how beautiful it was. That’s all you have left at the end.” It’s a perfect summation of a record that is intrinsically sad, introspective and deeply personal.

Having had previous records produced by Bright Eyes’ Mike Mogis in Omaha, the Scandinavian sisters headed west to Portland, Oregon and handed the reins over to folk-rock producer Tucker Martine for Ruins. Martine drafted in a number of notable musicians including R.E.M guitarist Peter Buck, Wilco‘s Glenn Kotche and McKenzie Smith of Midlake, but the heart of the record is still the Söderberg’s songwriting, playing and harmonies. They aren’t doing anything new here – their blend of Emmylou Harris inspired Americana and Simon & Garfunkel esque folk-rock is nostalgia at its finest – but why would they change? There’s few in the charts today that can create something that sounds as simple and effortless as this.

Bookending the album is two one of the most cinematic tracks the pair have written to date. Opener ‘Rebel Heart’ is powerful and gutsy and asks what it is “that makes me run / that makes me want to shatter everything that I’ve done.” The song builds in dynamic and passion, steadily building until three taps of a drum stick announce the songs second-half. Glenn Kotche’s drum pattern steadies the sisters as they sing near-deadpan “I fell so hard / so blindly / had to come back and find me.” The song seems to end on a resolve to move on, (“And it’s in the past”), aided by a rising orchestral crescendo which makes use of percussion, strings and trumpet. What follows for the next half hour is a document of Klara’s journey as she tries to come to terms with its collapse.

Finger-picked guitar loops craft a melody of melancholy and aching in ‘Ruins’ and ‘To Live A Life.’ Self-reflection and sombreness colour two of the softest, most sparse offerings on the record. “I lost you didn’t I? First I think I lost myself” she sings on the title track, while on album  standout ‘To Live a Life,’ Klara notes “we were a lost cause long before we fell apart.” It lies midway on the record and unlike previous tracks, the stripped-back number allows the younger sister’s solo vocals to take centre stage. It is here that the heartbreak is at its most tangible, the blunt delivery of “I am alone now” cutting a soft blow. But just seconds later, Johanna joins Klara and the vocals combine in a sweeping harmony to sing; “Then suddenly we wake from this dream that we have made / It hits you all at once and then it slowly fades / I am racing in to nothing now, it all falls away / I know it now, for my own sake, that I cannot stay.” The melody weaves and lilts, the harmonies lucious. It’s perhaps the most beautiful moment of the album.

Elsewhere, there’s a charming country twang to ‘Distant Star’ and the Gram Parsons sounding ‘Postcard,’ which is embellished with Melvin Duffy’s pedal steel and has Klara exclaiming “Pick it for me James!” (a reference to Parsons’ ‘Return of the Grievous Angel’). There’s also a few upbeat moments such as leading single ‘It’s A Shame’ and ‘Hem of Her Dress,’ where the influence from Neutral Milk Hotel is obvious. The recording feels energetic and fresh, like they might have just picked up their guitars for a tune at their friends gaff.  The song ends with an eruption of clapping and laughter. The overall feeling is cathartic despite the underlining heartbreak of the lyrics (“I learned some things never heal with time.”)

The group sing-a-long transitions us into closer ‘Nothing Has To Be True.’ Juxtaposing the previous track, and most of their discography, the final track sees the sisters scrap their legendary harmonies for switching solos. There is an epicness and gravitas to the track, the final lyrics to the album cementing the sombre mood of the record (“You get lost counting the years / Since you last felt like you were home.”) On Stay Gold, they asked “What if I fall and can’t bear to get up?” Four years later, Ruins charts that fall. It charts the collapse of a relationship, of trust, of the future you imagined. It charts the deterioration of self-belief, of self-esteem, of hope. Yes, this is an album of heartbreak, loneliness and pain, but there is camaraderie, comfort and solidarity coursing through it. Ruins might exist on the back of the demise of one relationship, but it flourishes on the strength of another. Nicole Glennon

Summary: Check Out: 'Rebel Heart', 'To Live A Life'