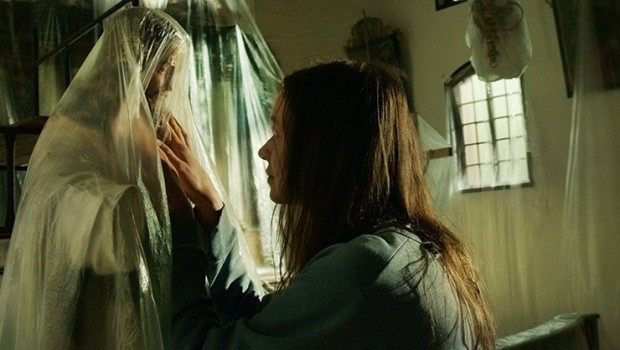 The ‘tower’ of the title, or ‘wieza’ in the original Polish of Jagoda Szelc’s debut feature Tower. A New Day, is represented by Mula (Anna Krotoska), a tightly wound, defensive mother and wife who lives in the countryside with her family. She has the pressure of looking after her sick mother, who exists in a borderline comatose state in a spare room, and her young niece Nina (Laila Hennessy), abandoned by her birth mother and raised by Mula as her own. On the eve of Nina’s First Holy Communion, the family is visited by her biological mother, Mula’s sister Kaja (Malgorzata Szczerbowska), joined by their brother and his clan for a celebration of Nina’s rite of passage. Kaja is the ‘bright day’, or ‘jasny dzien’, which dawns on the settled domestic existence, her unpredictable personality bringing the threat of disruption and upheaval.

Kaja has been gone for six years, and offers little explanation for her disappearance. She seems brittle, aloof, distracted, but all Mula wants is for her to ‘act normal’, keep silent about Nina’s true origins and, above all, not ruin the girl’s big day. Kaja plays ball, but still inspires paranoia and anxiety in her sister, her arrival marking a new, unsettled air. Their mother Ada (Anna Zubrzycki) emerges from her funk, bright, alert and talkative for the first time in years, a borderline miraculous turnaround. A police helicopter rumbles overhead, searching for a lost tourist who turns out to be a climate refugee. The local priest, preparing the children for their Communion, seems to have come down with something, and becomes distracted and unable to control the kids.

Mula’s guarded personality is mirrored in the film’s style, which only briefly interrupts the family drama with suggestions of menace lurking in the natural landscape. Even Kaja’s good-natured, knowing acquiescence only adds to her sister’s suffering. Krotoska’s strained performance, tight horror movie sound design and the jumping between difference perspectives brings disorientation and tension, concluding in a challenging, defiantly non-cathartic and ultimately a little silly final shot that shifts genre into something more ethereal and eschatological.

Tower. A Bright Day emphasizes atmosphere over story credibility, the invocation of climate, the vision of a mothballed altar and dream sequences suggesting fears of invasion and collapse, and the fragility of the institutions (church, family) designed to shore up our bearings in the world. Some audiences will find this maddeningly unspecific, and there is for sure some artificiality in its insistence on opposition between the sisters, and Kaja’s free-floating, borderline-apparition presence. The relationship dynamics can feel like things for Szelc to hang other ideas on, rather than real in themselves, but the close, handheld interior photography helps charge an occasionally melodramatic family drama with nameless sinister murmurings. Conor Smyth

Wieza. Jasny dzien will be released in Poland on 30 March. It does not have an Irish/UK release date yet.