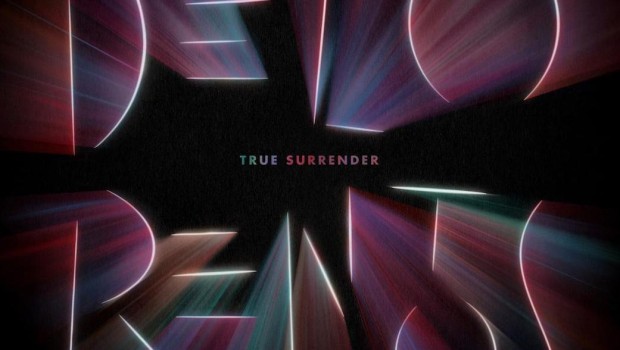 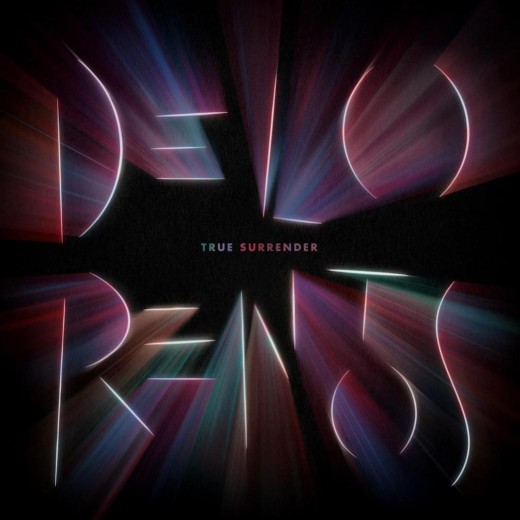 Delorentos fifth studio album, True Surrender, boils down to one simple message: Cut the bullshit. Through intricate metaphors of escapism, bold images of desolate extradition from society and elusive references to the current, global political state, the Dublin outfit beg us to take a step back and ask ourselves: Is this the world we want to be living in? From observations of panic to eventual acceptance, the 2012 Choice Music Prize winners take us on a journey through some manner of existential crisis, leading us ultimately to a state of acceptance.

The album opens with a recurring, focal image of an island, setting its narrator in a remote environment, removed from society, observing the wider world. This sense of desolation in the album’s opener ‘Stormy Weather’ is solidified by Rónan Yourell’s isolated vocals creating images of black oceans and aggressive storms, pulling subtle influences from unnamed Irish landscapes and their violent beauty. It sets a foreboding and ominous tone for the rest of True Surrender, placing listeners on the brink of disaster before bringing us to safety. In the first three tracks, Delorentos establish the core theme of isolation, building anticipation for the next stage of the album.

‘In Darkness We Feel’ presents us with the first glimmer of hope in this near-dystopian realm. The ringing harmonies, bring with them the impression of joint suffering, or acceptance. Delorentos introduce a string of elusive  references to the current global, political state, (“Open up the borders”, “Looking back in time… finding only famine or feast”). At times, we fear the Dublin group may stray a little too far into the U2 levels of preaching but there’s a musical substance breathing fresh air into a seemingly broken record and clichéd message. The uplifting symphony of synths and chanted backing vocals give the album the firm backbone it needs. Delorentos use their acute ear for quirky hooks and fearless experimentation to keep True Surrender on track at all costs, refusing to let it slip into the mindless, directionless, stream-of-consciousness mess it could have been.

From the universal to the personal struggle, the album takes a full turn on the narrator. The retrospective track, ‘Am I Done?’ tackles notions of fear and doubt in the wake of a personal crisis. Classic lines from your all too familiar insecurities ring loud here: “Am I over before I’ve begun? Am I scared of something barely there? Am I scared and underprepared? Am I somebody who can’t change?”. Delorentos even go so far as to take a swipe at the problematic stigma surrounding Irish men and their mental health, stating, “It’s manlier to just suppress”. The track itself is far-removed from the album’s minimal electronic influences, remaining almost entirely acoustic throughout. This shift in sound solidifies the intimacy and personal anguish addressed in the track, its intimacy and honesty making it the real of highlight of True Surrender.

We return to our regularly scheduled programming in the final few tracks of the album. There’s a fresh course of optimism in these closing, synth-fuelled, festival ballads.The message boils down to every clichéd motto on wellbeing you’ve heard; learn from your mistakes, Carpe Diem, live in the moment etc etc etc! The infectious hooks and toe-tapping beats of that drum machine, lure you into believing what they say, though. Ultimately, this is an album of festival and radio-friendly tracks that ward off concerns of lyrical cliché and repetition by using the tools and talents they have remarkably well. In the hands of many other bands this format of anthemic production meets “optimism in the face of crisis” lyricism would be ham-fisted. In True Surrenders case, however, with its bold musicality and honesty it’s hard not to be convinced that, even in the face of personal crisis, there is hope that things will probably be grand.  Christine Costello