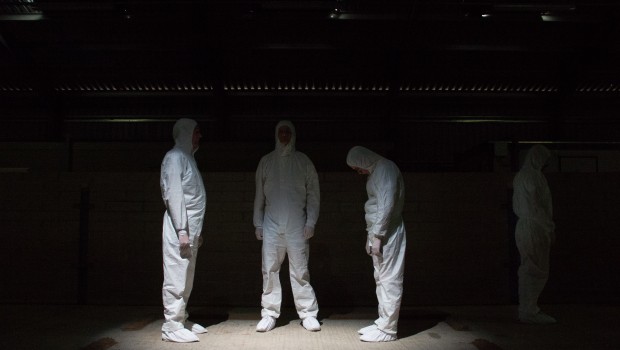 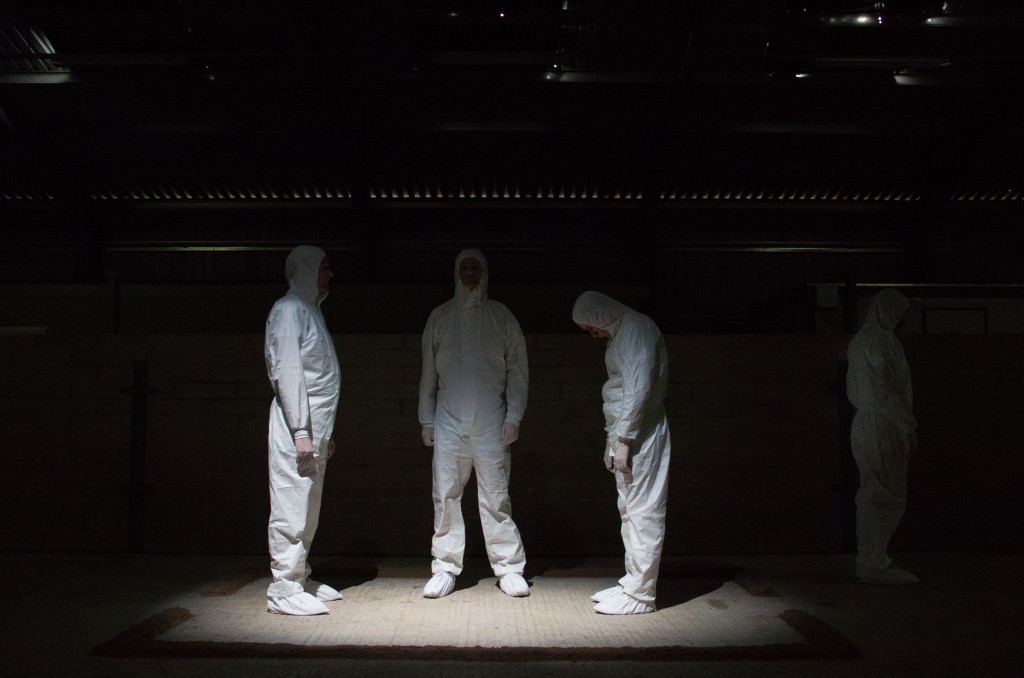 Even before the passengers disembark at a secret destination in the Fermanagh countryside, the drama has begun. Franz Schubert’s Winterreise provides the soundtrack en route before the bus stops. The door opens. A woman in green overalls gets on. Megaphone in hand, a bandana masking her face, though oddly, with an opening for the mouth. She walks silently down the aisle, scrutinizing the faces as though searching for the guilty party. Silence descends amongst the passengers.

Search over, the woman gets off the bus, as do the passengers, who find themselves in front of a green cattle shed or some such. A second individual, similarly attired, bangs the iron door, which slides open to permit entry. Inside, a recorded voice from a large megaphone instructs the arrivals, in a mechanical mantra, to stand behind a white line.

It’s an eerie prelude to Samuel Beckett’s last play, What Where, though the dramaturgy thus far is the work of Director Paula McFetridge and the actors of Belfast-based Kabosh Theatre Company. The mystery and suspense are also very much in keeping with the “secret location” works that have become one of the hallmarks of the Happy Days Enniskillen Beckett Festival. Where you are being lead to, and quite what you can expect, are unknowns. A little like What Where itself.

One of Beckett’s shortest and most political plays, What Where was commissioned in 1983 by the Graz Autumn Festival. Beckett wrote it in French and translated it himself. On the page, the exchanges between Bam, Bem, Bim and Bom are unsettling enough, but presented in a cattle-shed, with its associations of slaughter, the play takes on a more sinister character.

“We are the last five”, a monotone voice intones via a standing megaphone. In fact, there are only four, who come and go via the three entrances/exits of a dimly lit rectangle. Dressed in the same white coveralls, their shoes too, are sheathed in white protectors.

“It is spring”, the voice informs. Bam, standing at the left entrance of rectangle stares straight ahead, while the others, in turn, face his interrogations with heads bowed. Bam asks each if they “gave him the works”. He wants to know if the subject “wept?”, “screamed?”, “begged for mercy?” The answer is yes every time.

But the subject of the torture, much to Bam’s annoyance, “didn’t say it”.  The tortured, and the nature of his confession, are undeclared. If he didn’t say it, Bam prods, “why stop?” Because, we learn from Bom, the man passed out. “And you didn’t revive him?”, the interrogator asks accusingly. Bom tried to, but admits to failing. “It’s a lie,” barks the interrogator.  “He said it to you. Confess he said it to you. You’ll be given the works until you confess.” Now the torturer faces the prospect of becoming the tortured.

And so it goes with Bim and Bem, who march in and out of the rectangle robotically, escorting each other out in a sinister choreography of suspect and jailor. Each interrogation with Bam marks the passing of time. Summer, autumn and winter come – a nod to the cycles of Schubert’s Winterreise, and go – a metaphor for death. In this sobering Beckett play – just ten minutes in length – the torture, the threat of torture, the accusations and reprisals never stop, like the seasons repeating themselves ad infinitum.

This surrealist play can be seen as a companion piece to Beckett’s Catastrophe from 1982, a stark commentary on the individual’s fate in a totalitarian state. Beckett dedicated that play to Vaclav Havel, the Czech playwright, then languishing in a state prison. The currency of threat, humiliation and dehumanisation that runs through Catastrophe – in short, the shadow of violent death – are common to What Where.

And, in a way, What Where, with its precisely choreographed comings and goings, a robotic dance macabre of sorts, echoes the mathematical dance of Quad [1981].

It may be tempting to look for unifying threads of meaning that undoubtedly course through Beckett’s works, but the pitfall of over-analysis lies perhaps, in missing the immediacy of the message – if such a thing exists. After all, “Make sense who may”, is Bam’s final offering.

What Where, for all its surrealism and ambiguities – its layers within layers – appears to be unequivocally a political play. Theatre director Walter Asmus recounts how in 1983, when confronting the play, Beckett said in an unfinished sentence: “If you think of the political situation in Turkey…”

The torturers and the tortured, the information and disinformation, could be almost anywhere, at any time in history – past, present, and almost inevitably, future. Ian Patterson