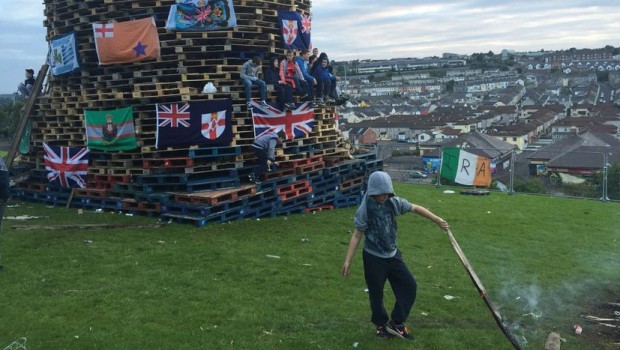 A Mother Brings Her Son To Be Shot 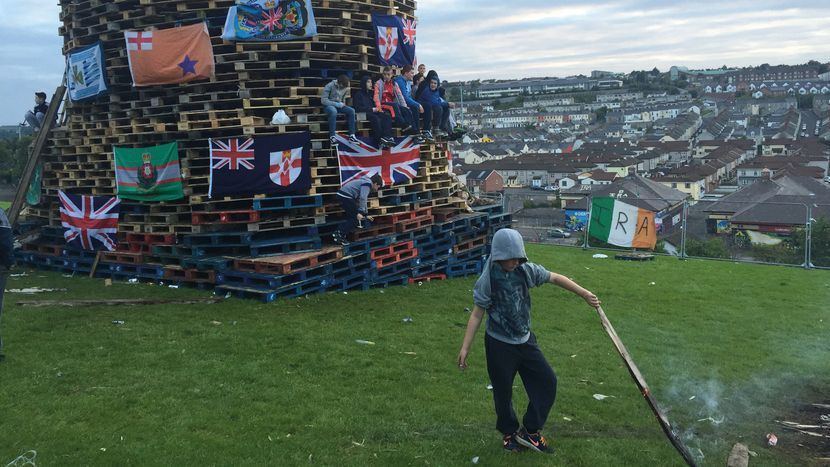 11 year-old Kevin Barry is in his kitchen, holding a hatchet up for the camera. He turns to his makeshift armoury. Here, he demonstrates, is how you throw a saw at someone running away.

Kevin Barry is the youngest child in the O’Donnell family, who live in Derry’s Creggan estate, estranged from official ‘city of culture’ pride. His older brother, Philly, is currently exiled in Belfast, on orders of the neighbourhood’s Republican paramilitary enforcers. For his apparently drug-fuelled anti-social behaviour, Philly was sentenced by a secret vigilante panel and blasted in the back of both knees. There’s still a bullet lodged in one of them. His mum, Majella, gave him a lift to the shooting ‘appointment’. In certain parts of Derry — and in NI more generally — this is considered a perfectly normal thing to happen.

Sinéad O’Shea’s A Mother Brings Her Son To Be Shot is a stunning, stinging portrait of a PTSD society and the dysfunctions it nurses, a place where damage is passed down generations like a curse. Rooted in the everyday danger and strangeness of pockets seemingly untouched by the peace process, A Mother is the essential documentary about contemporary Northern Ireland.

Majella eventually negotiates Philly’s return home, but it’s not much of a life. He’s trapped in the house, haunted by nightmares of masked men, flicking through his phone, struggling with the despair of being hunted, his mental health dissolving. He’s paranoid and uncertain, and with good reason: his ultimate fate will be decided by the opaque judicial bureaucracy of the local Ra. He complains that they’re making up charges against him, and they might be. Hugh Brady, a former high flyer in the Republican movement who now acts as a liason between the vigilantes and citizens under threat, warns that Philly, and his Kevin Barry too, need to keep an eye on their behaviour, otherwise extreme measures may be taken.

For the slippery Brady, the punishment shootings are an organic instrument of community self-policing, a substitute for Police Service absence on an estate that still sings the songs of the struggle. For the cynical Philly, they’re “hoods with guns”, gangsters who use intimidation to control, and profit from, the local drug trade, rather than eliminate it. Amidst all the smoke of plausible deniability it’s hard to know where exactly the truth sits, and it’s this Kafka atmosphere that helps the film resonate with wider Northern Irish realities.

A Mother is executively produced by Joshua Oppenheimer, whose work famously captured the insanity that passes for normality in post-conflict environments. It doesn’t have the high baroque derangement of The Act of Killing but it does have that queasy mix of tragedy and comedy, moments of bitter, unbelievable laughter. One sequence involves O’Shea and Brady meeting masked men in full Ra cammo, who do an awkward armed “patrol” for the camera. It’s a gross, silly little ballet.

Then Brady rushes to a front door to comfort an upset resident, whose son was murdered by the vigilantes. What kind of memories did the men trigger? Did she think they were coming back for her? Brady is apologetic, not for the death, but for the oversight that located their performance outside her house. God forbid they would be tactless.

The film captures people left behind by politics, and by economics too, which fuels the first. In terms of career, or education, or advancement, there is little tangible to work for, and in that empty space the romance of the IRA blossoms. Kevin Barry is fatherless for most of the film thanks to the elder O’Donnell’s prison sentence for trying to blow up a police station, but he talks openly about how much he wants The Troubles back. Because at least that would give them something to do. At least then something would finally happen.

O’Shea’s film is an extraordinary examination of a neglected community, a rebuke to post-Agreement complacency, and a warning about the dark matter that persists just out of sight. It’s a frank admission of how fucked up our wee country is. Conor Smyth

A Mother Brings Her Son To Be Shot is showing at QFT, Belfast and Light House Cinema, Dublin from Friday 14th September.

A Mother Brings Her Son To Be Shot Conor Smyth