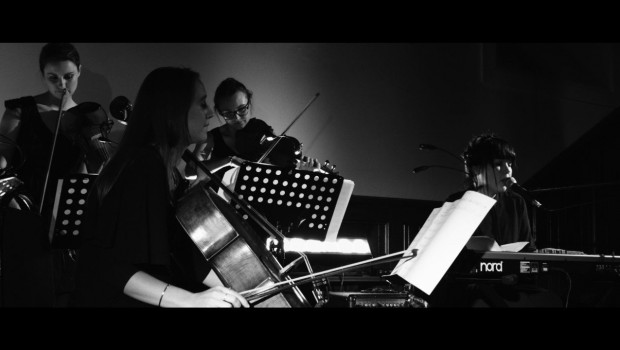 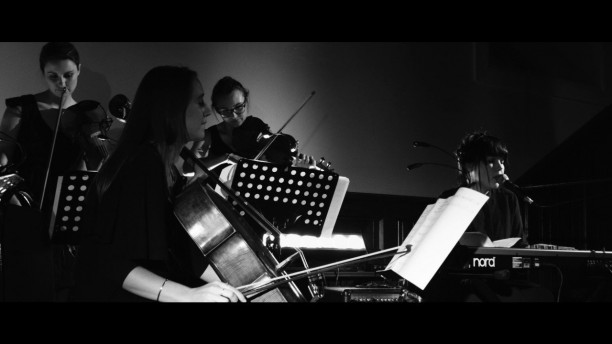 Salt Interventions documents a superb live performance by Waterford musician Katie Kim as she teams up with the Crash Ensemble to revisit and reimagine her darkly brooding masterwork, Salt.

Casting a new light on the 2016 album’s nine chilling tracks, Kim chooses to divest her compositions of the surging electric guitar figures and stormy electronic textures that were so central to their studio incarnations. Instead, she boils her song’s down to their base emotional bone broth, allowing her authoritative vocals to take centre stage as they unfurl over unfussy piano chords, leaving it to the orchestral 14-piece Crash Ensemble to provide a veritable tidal wave of harmonic support.

Opening track, ‘Ghosts’ encapsulates the radical textural departure taken by Kim on Salt Interventions. Slowed down and reframed as a shivering dirge, the thrashing white water of the original recordings’ tectonic drumming and fuzzy atmospherics are nowhere to be heard. The listener is instead greeted with appropriately phantasmal strands of violin and cello which appear sighing and atonal as whale song before coalescing into a harmonious and eerily glowing accompaniment to Kim’s hushed vocals. The song seems to chart the crouched recollections of a doomed relationship and the sawing strings and keening brass motifs seem to gain pace and gravitas alongside Kim’s resilient and increasingly strident vocal as she finally processes the past, “we were two lost ghosts on the battlefield and that’s where we’ll stay”

‘Day is Coming’ is the next song to be melted down and recast. Her prickly post rock guitar arpeggios replaced with a dusty pizzicato, the elastic bounce of catgut and wood lending new buoyancy to the track’s opening bars while thunderous blasts of bowed double bass and a soaring violin descant more than provide the requisite high drama for the songs devastating second half. As Kim’s sharply emotive vocal rises to a concluding crescendo, the playing is so stylish and self assured that, were it not for the reverential ripples of applause at the song’s end, one could easily forget that this is in fact a live recording.

This is particularly evident on ‘I Make Sparks’, a song that on record represents one of Kim’s most outwardly noisy tracks; a maelstrom of swirling feedback and pounding floor toms that recalls Low at their most untethered. Here, Kim’s radical untacking of the track leaves little more than her simple arpeggiated guitar and the Crash Ensemble’s ingenious playing ensuring that not an iota of the original’s dread and chaos is lost, as orchestrations alternatively perch upon proceedings like a gentle frost or loom menacingly overhead like potentially skull skewering icicles.

As with any experiment, even ones as successful as this one, the results can occasionally be more intriguing than they are wholly rewarding and a few Kim’s interpretations fall short of their recorded counterparts.  The deathly ‘Body Break’ sticks pretty tightly to the minimalist template of its recorded forbearer but stripped of that version’s clever overdubbed vocal harmonies the track threatens to lose itself in its own protracted languor. Similarly the downcast ‘Someday’, while beautiful and swathed in doomladen strings, seems to beg for some kind of percussive mooring to stop it from simply dissipating into thin air.

More successful is the wonderful, ‘I Left You Covered’,  the only previously unreleased song on the record and easily one of the most ominous compositions in Kim’s catalogue. The impressionistic murder ballad builds on a sickly pizzicato pulse and showcases the appealingly gritty edges of Kim’s voice as she intones “I left your body in the lake. Me and my sisters, we don’t get out much… but still I harbour the blame.”

Drawing to a close with the quietly climactic ‘Wide Hand’, Kim and her collaborators conjure up a swooning swan song of sonorous piano crashes and swelling string harmonies before nonchalantly bidding farewell to her adoring audience with a simple, “Thanks a million”.

With Salt Interventions Katie Kim proffers her own unique take on the idea of a live album, creating an immersive and intimate performance that manages to be fresh and revealing while never losing sight of the raw emotion and chilling melodicism that made the recorded source material so compelling in the first place. James Cox

Summary: Check out: 'Day Is Coming', 'I Make Sparks', 'I Left You Covered’