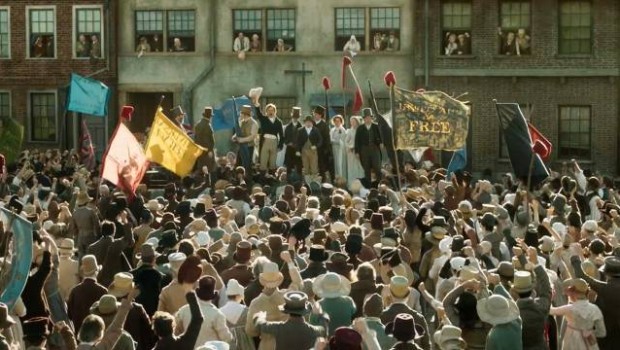 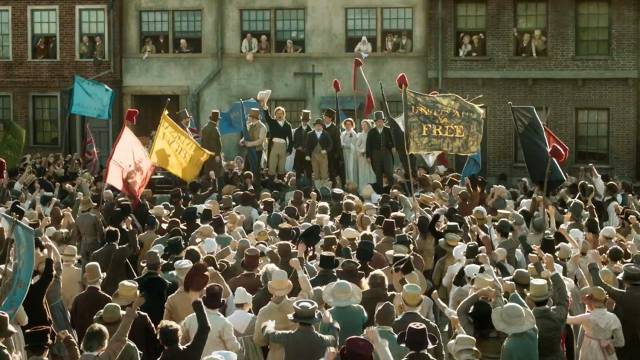 The true story of the Peterloo Massacre is a shocking chapter in England’s history that needs to be told. In theory, writer/director Mike Leigh (Life Is Sweet, Mr Turner) should be the man for the job, given his track record of making classic films that delve into the everyday lives of the English working class. But while Leigh does manage to capture the look and feel of the time period in a very realistic and credible manner, the viewer may feel that he is a bit heavy-handed in getting his message across, creating a tone that off-sets the seriousness of the matter.

In 1819 in Manchester, England, a crowd of 60,000 people gathered for a peaceful pro-democracy rally in St Peters field to demand an end to the rising levels of poverty and for political reforms to be implemented. In response, the government sent in the military on horseback, which resulted in many deaths and hundreds injured. This became a defining event in the history of British democracy and the catalyst for the creation of the Guardian newspaper.

Starring Maxine Peake (Funny Cow), Rory Kinnear (Skyfall) and Philip Jackson amongst a great English ensemble cast, Peterloo is an Amazon-backed production that undoubtedly looks the part in its costume and set design, particularly with the representation of the workhouses in the early stages of the film, and the difficult to recreate linen house factory. When the film gets into the nitty-gritty of the build-up to, and act of, the rally and massacre, Leigh doesn’t hold back on the emotive and passionate speech delivery, Kinnear’s in particular, communicating the tension, brutality and disorder that must have surrounded the notorious incident.

Where the film mostly falls down is in how Leigh decides to represent the antagonists of the story, namely the four judges who order the massacre and their henchmen spies, who eavesdrop on the subversives as they plan their rally against them. It all gets a bit pantomime in the depictions of at least two of the judges – Dickensian but not in a good way – and the spies, who are dressed in black, sinister garb, with menacing looks on their faces. Leigh’s approach felt overbearing and stereotypical. To add to the unrealistic feel, some of the dialogue and humour between the various characters felt hokey and out of place, given the seriousness of the subject.

But Peterloo is not a bad film. The acting is mostly on-point and Leigh sends his message with ruthless efficiency in the build-up and finale. It also deals with a historical event that many people outside of the North of England would potentially never have heard of, along with being a timely piece, given the attacks on the working class and poor by the present Tory government. The result is a flawed but important piece. Kev Lovski

Peterloo is on limited release until Thursday 15th Nov.