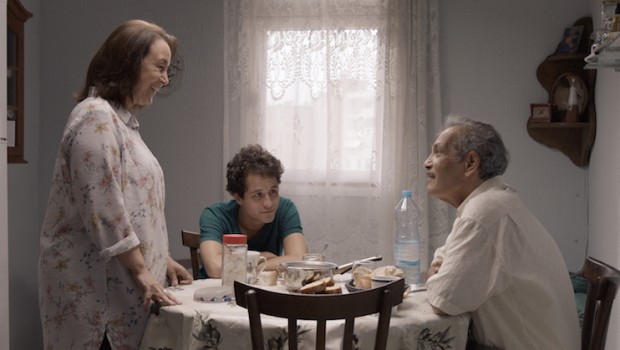 For western society, ISIS is often depicted as a bogeyman hiding in the shadows, waiting to strike. Rarely do we have to contend with the possibility that our children could be seduced by its poisonous ideology. That is the ordeal faced by Liadh, a middle class Tunisian father in Mohammed Ben Attia’s Dear Son. Sadly the film is crippled by a myopia that prevents it from fully exploring its striking premise.

The film’s solid first act at least takes the time to establish its protagonist. Played by the endearing Mohammed Dhrif, Liadh is your quintessential doddery dad. He fumbles for change at the supermarket, shares inane viral videos with his family, and struggles to understand his son Sami, who endures painful migraines, and seems racked with anxiety about his upcoming college entry exams. His father’s well-meaning assurance that he can re-sit the exams two or three times will resonate with any parent who’s tried to coach their child through the dreaded Leaving Cert.

For a while, it seems like the central conflict will be whether Liadh can counsel his son through these damn exams. But when Liadh and his wife Nazli discover that their son has run away to Syria to train with ISIS, the film fails to capitalize on its nightmarish premise. Some may find it admirable that writer-director Attia sidesteps the politics to concentrate on the very human grief of losing a child to ISIS, but he’s too stingy on the telling details. It makes sense that we never learn what initiated Sami’s radicalization, since the film is tied to Liadh’s oblivious perspective, but we get precious little insight into the father’s evolving perception of his son.

Instead Dear Son frames its narrative as that of a man who must accept the choices his child has made, and persevere regardless. Any tough questions about Sami’s radicalization seem like a hurdle that Attia must leap over in order to chase his obsessions about fatherhood. One starts to wonder why he felt the need to make a film relating to jihadism at all.

It’s suggested that Liadh’s parenting – simultaneously smothering and ineffectual – has pushed Sami down this dark path, but Attia never explores that thread in any meaningful way. That’s symptomatic of a screenplay that constantly implies, but never does the hard work of dramatizing. Instead Attia relies too heavily on his talented cast to bring dimensions to the slight script.

Dear Son could have been a very timely film, but Attia ignores his material’s pressing themes to make a film about jilted fatherhood that lacks any specificity. Some might call it subtle. Most will likely see it as wasted potential. Jack O’Higgins

Dear Son was screened as part of the Dublin International Film Festival. It does not currently have an Irish or UK release date.

Jack O’Higgins is a critic based in Dublin. Follow him @jackohigginz.