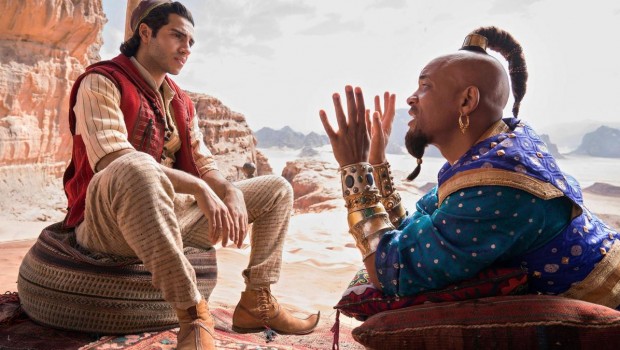 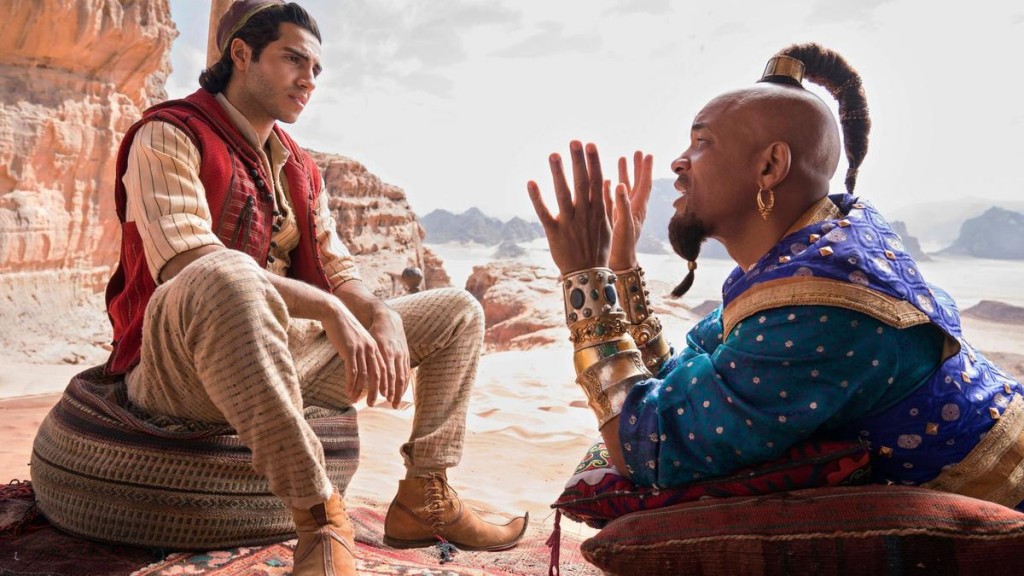 How is it possible for something to be both the same, and less?

It’s a curious philosophical achievement Disney have found themselves excelling at since they decided to take their beloved animated properties out of Walt-style cryo-freeze and serve them back up to us, re-animated in flesh and blood.

The latest in the mega-corp’s line of live-action simulacrums, Aladdin is a magic carpet ride that never gets off the ground, a weirdly lumpy Arabian Nights retread from Guy Ritchie, the obvious go-to guy for a fun, campy Middle Eastern romance. It’s much the same as you remember: Aladdin (Mena Massoud) is the Agrabah street rat with a pet monkey who falls for Princess Jasmine (Naomi Scott). Flanking her father is the Sultan’s closest advisor, the bitter Jafar, who resents his second-place status and lusts after the power of a fabled magic lamp buried in desert caves. But he needs a “diamond in the rough” to get the thing first. Only the right riff raff will do.

The core break in Disney’s logic is the discovery that the rendering of animation into photo realism is an act of reduction. Ron Clements and John Musker’s 1992 original was a simple, nippy story given some grandeur by its exaggeration, dramatic storyboarding and palette jumps from cold night blue to hot coppers. Downgraded to studio filming, and the sets, costumes and lighting that come with it, the adventure’s easily-digested opulence moves with the cramped cheesiness of a Disney Channel teen drama, both leads belting tunes with delirious-to-be-here Micky Mouse Club energy. Almost every time someone starts singing it is immediately, surprisingly embarrassing: the big musical numbers have the forced gaity of afternoon cruise entertainment.

The most eye-catching change is the only one that sort of works. The riffing manic improv of Robin Williams’ Genie has been traded for Will Smith — big, blue, buff — who provides buddy comedy that is less elastic, and closer to his Hitch role. The solution to the potential visual ludicrousness of Smith’s Dr. Manhattan is to ground him in actual skin tones. Attempts at chirpy rom-com banter, in which Genie gets his own little flirt, are neutered by awkward direction and editing, but Smith, who at least is a seasoned performer, brings some lightness to the moments.

Jafar, originally so delicious as Jonathan Freeman’s tall drink of serpentine poison, is played by Marwan Kenzari with the soft good looks and dead eyes of a date rapist who aggressively manages a Carphone Warehouse. Princess Jasmine also receives an upgrade: her latent frustration with regal life developed into ambition for the Sultan spot, barred to her on gender lines, conscious political manoeuvring that comes across as awkward and condescending. Jasmine takes a rare trip outside the palace walls and is stunned-stunned-to discover there are hungry children in her kingdom.

Jasmine will be an unaccountable hereditary monarch, but she’ll be the people’s unaccountable hereditary monarch. She gets her own new song — “Speechless”, a Glee-style warbler about claiming her voice — and it sticks out amongst the existing Alan Menken score. The trouble with Jasmine flags up problems in moving folk tale archetypes into the ethics-inviting real world (this will be a bigger problem for the live-action Lion King, a right-to-rule story big on the “natural order”.)

Animation allows imaginative space for flights of fancy, even when they’re a bit shoddy in execution, like the computer rendering in the original escape from the Cave of Wonders. But live-action is less forgiving: when they get to the big musical peak, the ‘Whole New World’ carpet ride, the green screen effects aren’t fully rendered, and help keep the moment small. There are other bits of tonal strangeness, like when the film speeds up or slows down for drama.

Through a confluence of factors — personal vision, animation talent, hitting consumers at susceptible ages — Disney have succeeded, for multiple decades, in making movies that leave a mark. The defining feature of Aladdin, and the remakes in general, is disposability. The film runs through its beats like checklist, a collection of recollections.

Aladdin is out on wide release.