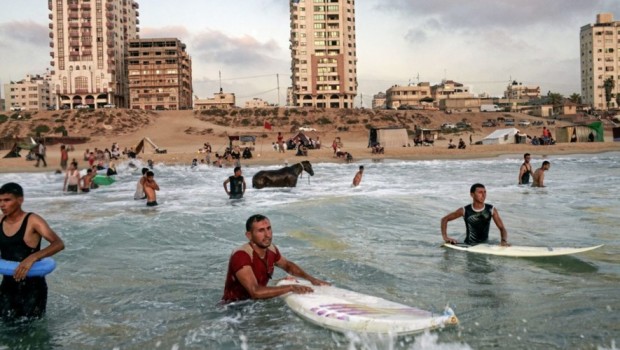 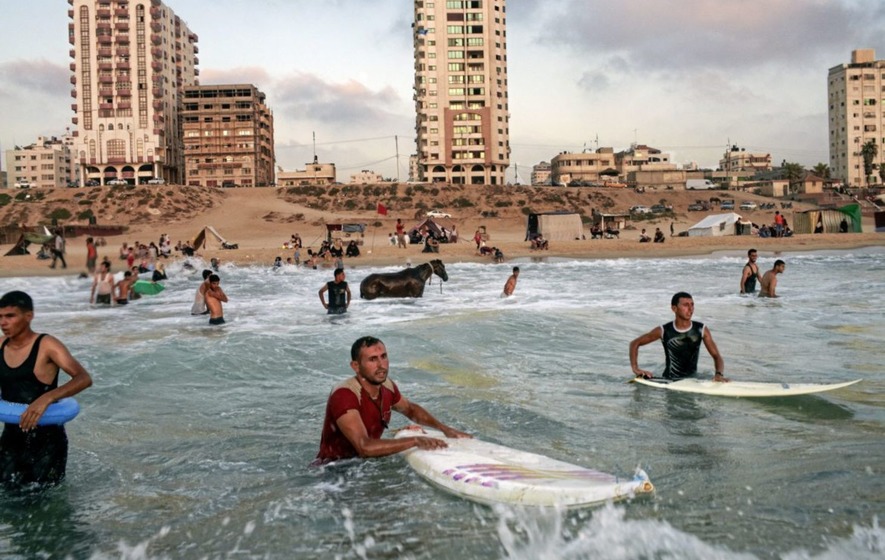 Is it strange to surf during a siege? The optics of a modern-day siege, and the visual poetics associated with the Gaza Strip, get scrambled and re-infused in Andrew McConnell and Garry Keane’s Gaza, closing night film of the Docs Ireland festival. Born out of McConnell’s “Gaza Surf Club” photography project, the film is a rare postcard from a desperate shoreline.

“There is a barrier separating the people of Gaza from life itself”, muses a theatre performer, who provides poetic commentary on the struggle of those living in the ravaged Mediterranean enclave. Habitually designated as the world’s largest open-air prison, the Strip is locked in and sealed shut, the passageways to neighbours Israel and Egypt closed, and a blockade patrolling the waters. There is no trade in or out and little agriculture to speak off. The situation is essentially an act of slow-motion spiritual and physical starvation.

Gaza is a brave and moving insight into the psychologies of the 2 million confined Palestinians. From the flotsam of wars and deprivation most try to assemble something resembling a normal life, making money or making art. One young man, left in a wheelchair after a horrific attack from the Israeli security forces, records rap music to reclaim personhood. A girl in her early twenties plays the cello, music which takes on new melancholic layers as time passes. A high society lady puts on fashion shows at her home and promises her models that when the exits are opened, she will take their beauty on tour. Living under an invisible but impenetrable ceiling, there is a inconsequentiality to all their striving.

Longing for freedom, energy and freshness is captured in the photography of Palestinians in the water, surfing or swimming or just enjoying that sense of lightness anyone who has lived by the ocean can understand. But even this comes with a bitterness: the scope of the ocean is closed off to them, breaching the blockade punishable by imprisonment or execution (the 3-mile limit turns the honoured fishing tradition into a shallow-water farce). The urban sprawl of markets, backgammon and bored men with nothing to do is captured in roving taxi cab streetviews, the taxi driver’s troubles with bills and debt raising interesting but unexplored questions about Gaza’s own internal class hierarchies.

Politics, on a literal level, plays a minor role in the film, just as they occupy a small part of the citizens’ day to day thinking. Hamas appear as machine-gun men on balaclavas patrol, policing imagery that echoes their apparent opposites on the Israeli side. Embedding viewers in the minutiae and complexities of the average person means that when the F16s scream and children start dying, it’s all the more terrible and terrifying.

We see clashes at the Israeli fence, the primary outlet for ritualised rage, from the perspective of an exhausted paramedic who works 14 hour shifts, before the gaze expands to spectacular drone-eye vistas, clouds of tear gas and smoke choking the frame like the end of the world. The weight of the tragedy is titanic. Conor Smyth

Gaza was screened as part of Docs Ireland and will be released on 8th August. Read more reviews from the festival.

The film’s directors and producers are supporting an initiative for a Gaza Red Carpet film festival: donations can be made here.