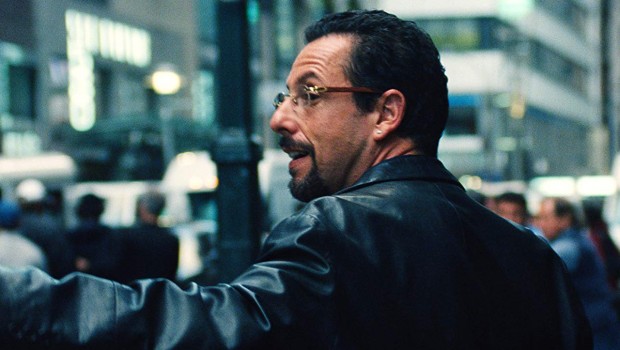 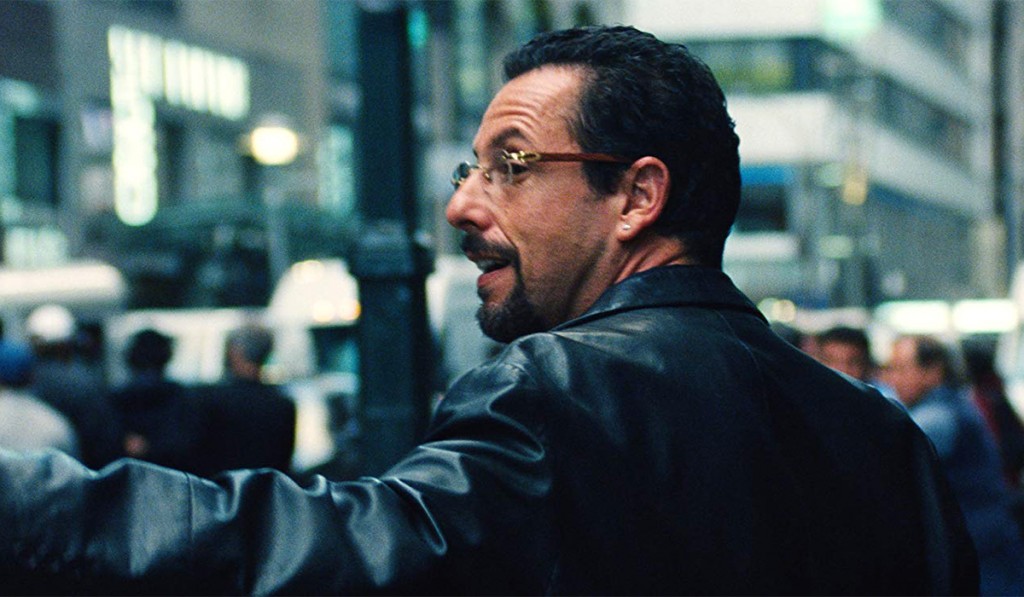 Uncut Gems, writer-directors Josh & Benny Safdie’s fifth feature together, starts full throttle and only occasionally lets up. It is fixed to the world and worldview of Howard Ratner (Adam Sandler), a jeweller for the stars in New York’s diamond district: a chancer and grifter, thriving in an ecosystem of insatiable avarice. As it becomes rapidly clear, he is a man that gets both a hit and an identity from triumphing over the constant barrage of knife-edge negotiations and impossible odds. Or, failing that, just surviving them.

Ratner juggles his family life, with kids he is provisionally interested in and a wife (Idina Menzel) who despises him, and a mistress (Julia Fox) who also functions as his assistant, a pressure valve and an emotional scapegoat. This is on top of an expanding web of shaky deals and mounting gambling debt, the latter laid dangerously at the feet of loan shark Arno (Eric Bogosian), with whom Howard has an unexpectedly complex relationship. It’s bruising but it’s a living, until a ploy and a gamble involving a possibly priceless black opal and NBA all-star Kevin Garnett (playing himself) threatens to send all of Howard’s spinning plates tumbling.

In what is their latest paean to extreme risk takers, the Safdies hone their own jury-rigged form and methods to a more expensive but uncompromised finish. They’ve cast a soup of non-actors, creative acquaintances with little or no prior experience of acting and seasoned, detailed thespians, and the effect is one of fervent improvisation.

Here the Safdies are in accord with a long lineage of independent cinema, American and international, which flirts with documentary-style authenticity in order to fulfil a realist imperative. Hence the dose of verité in how they shoot exteriors. When the action spills out into the streets and the ‘reality’ of unassuming crowds joins the hybrid melange, the long lenses of legendary DP Darius Kondji captures the semi-organised chaos of the tetchy, tense public square.

This observational style contrasts with the interiors, if not in spirit then at least in effect. There is the same free-floating sense of performers not fretting about hitting marks, while the anamorphic cinematography, squashed into close quarters, emphasizes and stretches faces. You feel like you are caught between, and squeezed by the heated, bullet-train encounters. It’s an immediacy that is more intimate and often more disorienting than street scenes watched from the safety of across the street.

The score blends realism, immersion and cacophony that recalls the free-roaming, conversational legacy of Robert Altman’s innovative sound mixing. In the cramped and garish confines of Howard’s shop, the visual and audio clutter, disordered even further by Kevin Garnett and his entourage, suggests New York as melting pot and rat race.

At the helm of this din is the excellent Sandler, in a version of his comedy persona: brazen confidence and obnoxiousness that should be, or can be, grating, but tempered by everyday-shlub likability. A loser but a tryer. Here he pushes it to the limit; the cracked facade of a con man who can barely contain his desperation.

Still, the comedy is still there: Uncut Gems is definitely the Safdies’ funniest film. Even the potentially-lethal farce of the plot is not miles away from older slapstick narratives, where the star fool or duo are transported by a Rube Goldberg machine of blunders, misunderstandings and poor decisions to a fate of their own making. A figure like W.C. Fields springs to mind—especially when Howard is contending with his resentful family situation—if he had ten times the Jewishness, drive and the manic urge to self-immolate.

The last one is a trait which the Safdies’ have been committed to showcasing in all of its horror and glory. It’s what puts them among the most thrilling artists at play in American cinema today. Ruairi McCann

Uncut Gems is out on wide release and will be available on Netflix from 31st January.