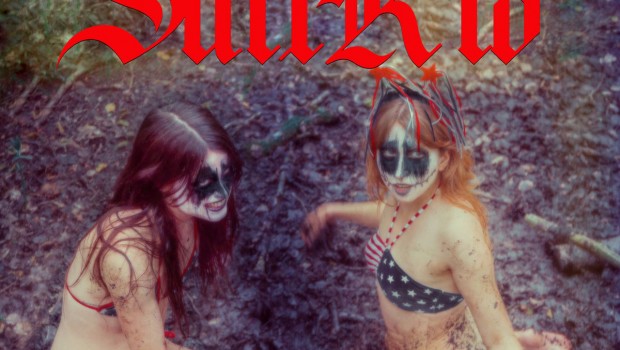 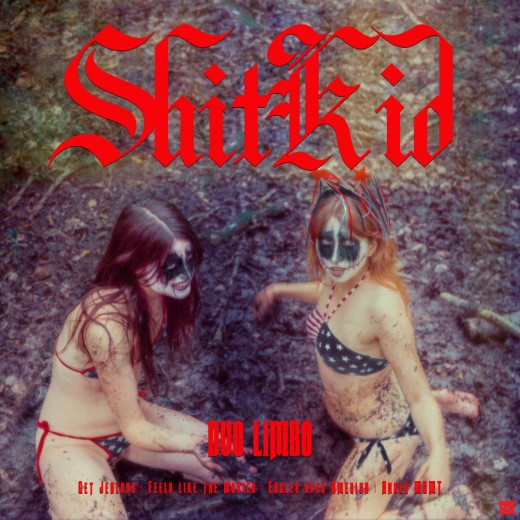 With a name as unashamedly playful and juvenile as ShitKid, Åsa Söderqvist knows exactly what her audience wants. Under this moniker, she offers up some delightful stoner pop nuggets with more than a dash of irony and ire. The strings are fuzzy, the drums are heavy and the melodies are sweet treats shoved through the grime of old school punk. There’s a decidedly scrappy, almost DIY, nature to everything she’s doing here. Her sound is lo-fi and has the atmosphere of being recorded quickly at a friend’s house using Garageband. Even in the visuals, this mindset is present as the cover of her latest LP, Duo Limbo/”Mellan Himmel å Helvete”, demonstrates. It’s a blurry photo taken on a film camera of two young women wearing Kiss make-up and American flag bikinis with their knees in the mud.

All that scuzziness belies a sharper edge running through what’s going on here. Going back to the cover, for example, if this were to be attempted more sincerely, and with a higher budget, you’d essentially end up with a Glam metal album cover. Except now, rather than the likes of Scorpions or Lizzy Borden revelling in the sexual degradation of women, you’ve got a pastiche that showcases how fundamentally dunderheaded that type of artwork is. It’s this dirt under fingernails, and the depth that entails, which makes ShitKid more than worth a listen, even when the songs aren’t always as strong as they could be.

Duo Limbo/”Mellan Himmel å Helvete” is ShitKid’s third full length in five years, and it’s fine. It’s 10 fuzzed-out rockers of varying quality and tone – technically four tracks performed twice each, once in Swedish and once in English. The strongest is ‘Anger MGMT’, with its gorgeous pop hook, and opener ‘Get Jealous’ which is quick and to the pointless. The middle two tracks, ‘Eagles over America’ and ‘Just Like The Movies’, are more of a mixed bag. ‘Eagles over America’ has a nice use of the tritone which gives it this very strong metal vibe and conjures the spirits of glam and NWOBHM and wraps them in a grunge blanket. There’s one more cut which is a four-second audio clip of someone asking if they should get beer which bisects the LP neatly. Outside of that, musically there’s not much else here. You won’t obsess over it or go back to it with any kind of readiness and intent. It’s great while it’s on and it doesn’t overstay its welcome. There’s not much more you can ask from a release like this. But there is a clever trick hidden up the band’s sleeve which lends the collection a lot more credibility.

The title of this one is actually kind of genius. It spells out the album’s chief ploy plainly but is endlessly clever. Firstly, the split in the title, which is significant as the album is the same record twice. There’s no difference bar the vocals. That’s where the split comes in. If you’re a speaker of only one you’ll only get half the meaning, you’ll only be able to appreciate it from a certain angle. If you do understand both, you’ll be able to recognise the wry pun that ties them together. On the English side, you’re listening to Duo Limbo, a play on DuoLingo and the duality of heaven and hell and where limbo sits within those two poles. On the Swedish side, you’re listening to Between Heaven and Hell, which sits in that same purgatorial position. The two sides are unified by an idea and separated by the means they use to convey it. It is a small trick and one that if you read cynically, it would be very easy to dismiss as a flagrant display of padding. But if you come to it on this level, you’ll be rewarded. As a bunch of songs, this LP will give you a good time, but as a unified piece with a statement at the core, well then there are more things between heaven and Earth than are dreamt of in your cynical interpretations. Will Murphy