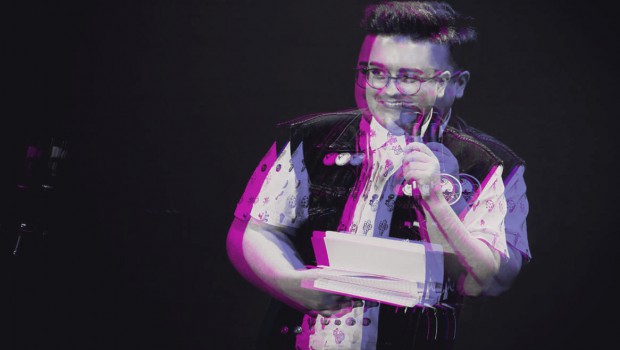 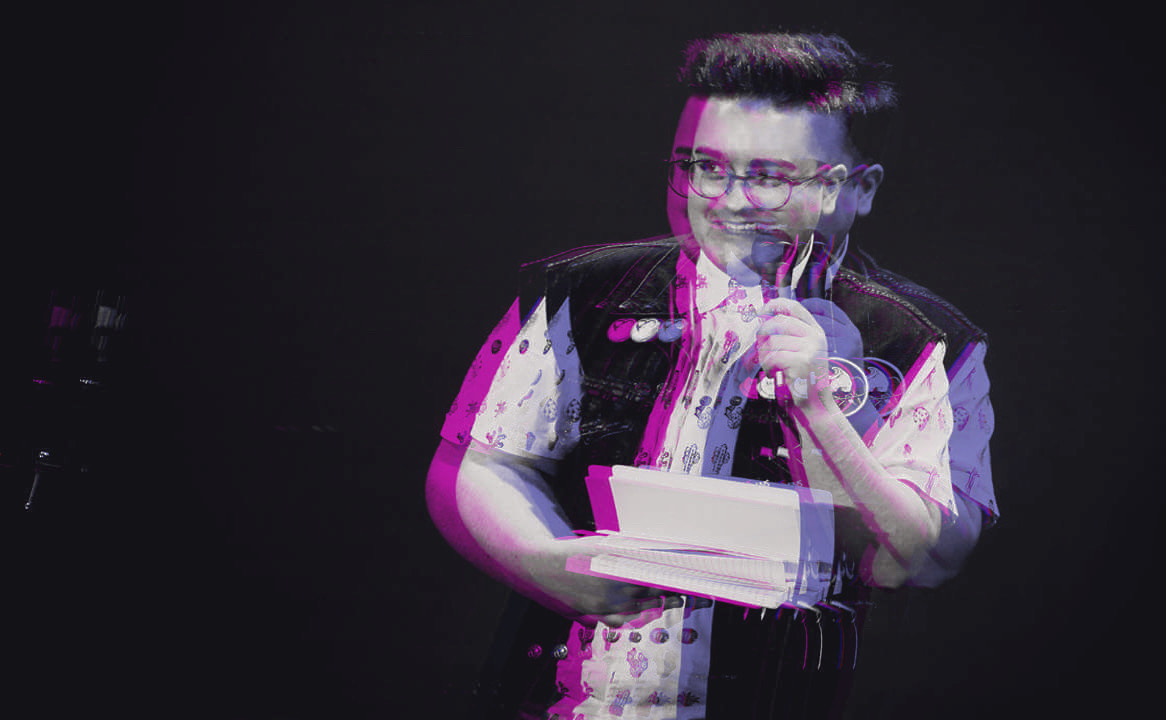 You know that equation in Fractal Mathematics, The Mandlebrot Set? When a formula is applied, an organic form that looks a bit like a cockroach repeats itself into infinity?

The Positive Spide was probably my favourite male comic from Belfast. He would get in his car and shout out the window to people in a working-class, aggressive Belfast accent things like –

“If you’re feeling sad just stroke a cat! It doesn’t need to be yours!! Just stroke it!! Yeooooo!!!”

If ever I wanted a reason for Elon to bring back Vine, that would be it.

I had decided to go to more comedy shows this year. One cannot live on endless Seinfeld repeats alone and ya gotta laugh don’t ya? LAUGH.

In my early twenties I spent a year unable to get out of bed owing to crippling depression, existing mostly on own brand 27p cooking chocolate. Even this was not as excruciatingly tedious as Jack Dee’s performance at the Waterfront.

It wasn’t wholly his fault. It had one of those audiences that you can only get in Belfast (whatarewelike). Drunk Culchies/Mas/people from Lisburn staying at the ETAP having gone out for pizza at one of the establishments that use Ian Curtis’ lyrics as branding. They’ve sloshed it all down with (could be 2% could be 80%) Kraft drinks in an Oirish City-Centre Pub and went up the elevator at Grand Central to give the staff a lesson in phonetics and how to not tip. His material. Lazy, post-Covid- ‘I agreed to this gig four years ago. This is purely contractual’

I’ve had enough of older male comedians’ hot takes on ‘woke’ issues, where their opinions have been formulated solely by Twitter and Mumsnet. I do not want these men to ‘do their own research’. Use literally anyone else’s. Please. The show should’ve come with a trigger warning. If you are averse to being so bored you’ve spent the entire set counting fire exits. Avoid.

It wasn’t wholly his fault. One woman just wouldn’t stop heckling in an incoherent ‘our wee country’ way that made me want to tear the flesh from my bones.

It made me feel a bit sorry for him.

Was in New Orleans a while back and saw Maria Bamford. The announcer before the show had the right idea:

“We would just like to remind you that this is a no heckle performance. If you heckle you will be given one chance, if it happens again you will be removed from the auditorium”

The most memorable bit was when she got so bored about her (self-described) privileged white woman’s bulimia rhetoric that she fell over and pretended to die from the tedium of her own narrative.

I feel ya, Maria.

Doug Stanhope at The Olympia had another way of dealing with an unruly audience, which was to tell people “The bar will be open throughout the performance. Get friendly with your neighbour and get a drink if you want. Do what you want!”  Being given permission to walk about and not sit in chuckle reverence had its own sort of policing.

He’s Doug Stanhope and that’s why I drink.

New Orleans has some similarity to Belfast in that the people have a jet-black humour that comes from Trauma (capital T). When on a coach back from the inevitable plantation visit (America is confusing. Abortion Chuggers on Street Corners in the wake of Roe v Wade. Slavery exhibits that named their grand alley of trees after the owners of ‘the big house’ and focussed on some odd pretence of cordiality between certain cherished enslaved individuals and their captors. Frozen Irish Coffee Daiquiris.) the lady driving swung by the Superdome to let some people off at their hotel. She was recounting that people had to decamp to the Superdome during Katrina. She told of the devastation and how slow the government was to react. We drove past a beautiful hotel and she started chuckling.

I visited Studio Be, Brandon ‘BMike’’ Odums solo project in Bywater where he had commandeered an abandoned warehouse in the aftermath of Hurricane Katrina *and* Rita to create large-scale pieces of Black Excellence that resulted in a focussed and powerful community project. What struck me was the thought that here I was. Big whitey in Bywater, in a warehouse belonging to a neighbourhood that had been torn apart by more than one hurricane. Historically lower income. Historically Black. The gentile folks from the Garden District couldn’t catch a Street Car here whether they desired it or not. My intention of being there was educational and genuine interest. However, as someone that has lived around Trauma Tourism in Belfast it was not lost on me that my being there had all the Dark Tourist cliches that I detest. Flip sake I even went to visit Nicolas Cage’s mausoleum in St Louis Cemetery and he’s not even dead yet! I might as well be pissing on the peace wall!

I’ll do a wee selfie hand-heart sure. Be alright.

Belfast LOVES a bit of trauma tourism. It isn’t far off from creating a hen-party bike bus tour to point at all the Good Friday Babies dizzy-dozing on Spice outside the McDonalds. Lament it as some sort of beautiful cruelty. ‘Sunday Bloody Sunday’ blaring on the Bose.

Do what you love and you’ll never work a day in your life.

BMike’s work certainly made me think about my own colonised ancestors’ part in indentured servitude. Building the tracks for their steam train ride to become some of the most racist gingers the cops can employ to future exonerate from the en-masse killings of innocents.

Went to a talk about Jamie Reid’s work of ‘Never Mind The Bollocks’ fame in the Art College (we are in Belfast now). It transpires that he is actually quite spiral-minded and a practising druid. The chap doing the talk mentioned ‘Visual Stress’ who were a group of artists involved in creating street actions, often surrounding Liverpool’s prosperity stemming from the Slave Trade. The chap referred to many cities having prospered from same, “probably Belfast too” to which someone in the audience responded “Belfast wasn’t built on the Slave Trade, because of McCracken’s Anti-Slavery League. We don’t get enough credit for this actually.” I was chatting to my friend after this and he thought for a second-

“Well, we may not have allowed the slaves off at the port, but we bought the sugar, we built the ships and we made the bloody ropes!”

When last at a comedy show of local (all male) comedians it appears that there has been little/no movement from the Nationalist/Loyalist/BT9/Culchie tropes that have been used since time and memorandum. I mean. Covid was new, I guess? Some of the funniest people I know are working-class men from NI. If only they could on occasion show that on stage and not rely solely on 30 years of civil war for their material. It’s so parochial sometimes that it actually makes me sweat. Where the likes of Jerry Sadovitz prevails (I mean, I get why people working in that Edinburgh venue would be appalled if they didn’t know what they were signing up for) is that he holds a mirror up to the sick parts of our society that should be, that needs to be, reflected upon. It’s well-crafted and he’s hilarious. When did comedy here get so homogenised?

I went to watch Leo Lardie at The Sunflower. I know Leo through his work at The Rainbow Project. If you stand still long enough beside him you end up with pocketfuls of condoms and tested for HIV before you’ve even told him “but this is your comedy show!”

This was his first solo show, he was endearingly nervous but had an audience that you could feel the love radiating towards him to do well. I really wanted him to do well too.

I loved his remarks on his Mental Health being a Haunted House, his open and importantly funny comments on living with BPD and being bullied as a child. When he got nervous and lost his thread he hummed a pretend holding music that was charming but unnecessary as the funnies were coming out so quickly, you would never have known.

“It’s hard to be hilarious when you’re hurting”.

What is refreshing about watching comedians like Leo after years of listening to men talk about wanking and the Malone Road and remembering Curly Wurlys is that although he was speaking about his very real trauma, it felt like it wasn’t an audience of voyeurs. It didn’t feel redundant or cheap or that we were bathing in a sort of reflected tragedy. It wasn’t boring. He didn’t mention sectarianism once. A genuine first at a local show. NEVER! NEVER! NEVER! (indeed). It felt that what he was speaking about really did reflect upon our society. Now. Today.

I suspect great things for Leo’s comedy career. Likeability is something you can’t really fake (my how I have tried) and I predict when stories like his become broader reaching he will gain mass appeal. Check him out the next time he’s on at the excellent Coven Comedy Club or Queertopia.

I learned something. Letting my emotions out was the best thing that’s ever happened to me. Sure, I’m not funny anymore. There’s more to life than making shallow, fairly obvious observations. Dawn Richardson