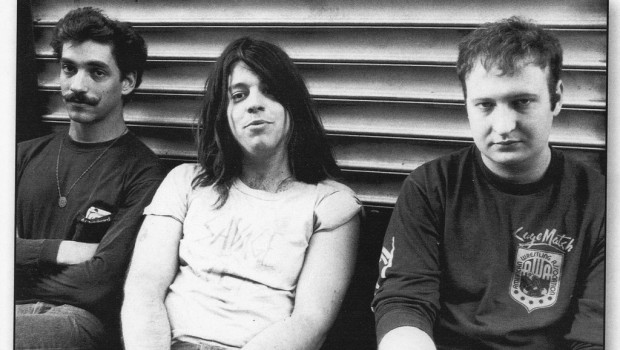 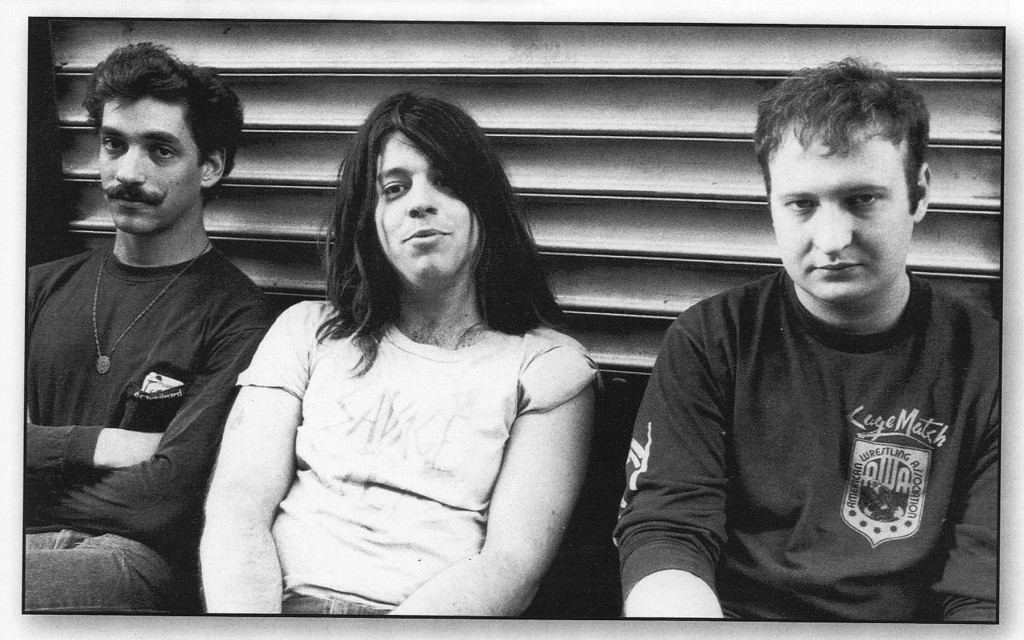 The sky is the colour of a television tuned to a dead channel. The ground is muddy and wet, and the detritus from wrecked automobiles are all around. Three figures stand, apart, but somehow together, and the air has the static charge of electricity. This is the Zen Arcade, and anything can happen here.

When it was released in 1984, Hüsker Dü’s Zen Arcade immediately stood out as being something new. Previously, the band had been one of the initial glut of American bands inspired by the thrilling rush of punk, taking the form and making it harder, faster, more aggressive, becoming one of the first players in the nascent ‘hardcore’ scene. And, like most other bands to emerge from hardcore, they were a difficult sell, resolutely unsexy, preoccupied with raging at an unidentified ‘You’, and as intent on alienating audiences as they were at winning them over. But then Zen Arcade happened, and nothing would ever be the same again.

Hüsker Dü were one of three pivotal musical forces to have emerged from Minneapolis in the late 1970s and early 80s. A fairly isolated city in the mid-West, the city had put itself on the musical map thanks to the efforts of a young black musician going under the name of Prince (which was, bizarrely enough, his real name). Establishing a new brand of funk and R&B known as ‘The Minneapolis Sound’, Prince attracted serious music industry attention, and whilst his first two albums were ultimately regarded as misfires, Warner Bros would find their faith repaid in ways they could never have possibly imagined within a few years.

However, punk would soon develop a musical stranglehold over the city, and a snotty bunch of kids from the suburbs going under the self-deprecating name of The Replacements would come to be the torch burners for a whole generation of bruised romantics, possessing the rare gift of being able to cats open their bleeding heart, before toppling over in a pile of beer and vomit.

But alongside Prince and The Replacements, Hüsker Dü put Minneapolis on the map for very different reasons entirely, reinventing punk for their own purposes, and blazing a trail that is still relevant today. Formed in Saint Paul, the unfashionable twin to the sophisticated Minneapolis, the band consisted of college student Bob Mould, a burly loner originally from upstate New York, the friendly and eccentric record store clerk Grant Hart, and his friend, the easy going Greg Norton. More a bunch of associates, rather than close friends, the three were nonetheless united and galvanised by punk rock, and after a few initial misfires, including their debut single, the arty ‘Statues’, the band issued a live record entitled Land Speed Record, and began to emerge as one of the crucial hardcore bands, leading the way where others followed.

Upon its release in 1982, Land Speed Record singled Hüsker Dü out as something different. The title almost worked as a childish boast, proudly displaying the fact that Hüsker Dü played faster than anyone else on the scene. Black Flag had the aggression, and Bad Brains had the chops, but Hüsker Dü had the speed – both in terms of velocity and the drug. Hitting the road, the band tested the tolerance of audiences wherever they went, getting faster and faster, just to antagonise the punks who came to hurl wads of spit upon the band.

But speed will only take you so far, and the bands debut album Everything Falls Apart, found them taking the foot off the pedal somewhat, showing that they were equally capable of melodies and conventional songwriting, something that the sheet-lightning of Land Speed Record had been missing. But whilst the album definitely proved to be a step forward, it would struggle to stand out amongst the deluge of hardcore records released in 1983, attracting a few positive reviews in the underground press, but little more. A stop-gap EP released shortly afterwards highlighted something new, however.

Metal Circus still contained blazing punk rock played at furious speeds, but it also possessed something that was a rarity in the aggressive world of hardcore – heart. Songs like ‘Real World’ and ‘It’s Not Funny’ highlighted a hugely developed sense of melody and accessibility, whilst ‘Diane’ indicated that the band were light years ahead of their contemporaries in the hardcore scene. Whilst other bands sang about hating their parents, or the military industrial complex, ‘Diane’ was a chilling account of the rape and murder of a girl, sung from the protagonist’s point of view. But rather than the ghoulish horror of the Misfits, Grant Hart’s song managed to become something chilling and moving at the same time, a complex and affecting lyric sang with a howling intensity that was quite unlike anything else in hardcore. Norton’s melodic bass propelled the song along, whilst Mould unleashed a coruscating and harrowing solo that served to heighten the emotional content of the song. This was a sound so raw and emotional, that it suggested that Hüsker Dü were moving into deeply uncharted waters, dragging hardcore with them.

But despite the depth and brilliance of ‘Diane’, no-one could have predicted the quantum leap forward of Zen Arcade. Beginning with the rat-a-tat of Hart’s drums, the rumble of Norton’s bass, and the slashing fury of Mould’s guitar, ‘Something I Learned Today’ is the culmination of everything Hüsker Dü had been building towards. With the aggression of punk, the melodic sensibility of pop, and the abstract lyrics of art-rock, Hüsker Dü had opened the gateway to a new frontier, and over the course of its 70 minutes, Zen Arcade would prove to be an ideological battleground for the very soul of music itself, tearing itself apart and re-inventing itself on almost every song.

Double albums were a pretty thin on the ground in the hardcore punk community in 1984, but that was just another rule that Hüsker Dü wanted to break with Zen Arcade. And never mind the fact that it was a double, it was also a concept album, charting the experiences of a young man who feels alienated and alone. Trapped in a constricting and unloving home set-up, he runs away, taking his own spiritual odyssey across America, becoming involved in a cult, finding a girlfriend who ODs on heroin, and ending up powerless as the world unravels all around him. Then the world explodes in colour and fury as he discovers that it was all a nightmare, the sound zig-zagging all around him as he searches for meaning.

Whilst the story is all over the place, and not everything adds up, the album is a spectacular tour-de-force of creative achievement, almost every song taking the listener to someplace new. The first side has a pointed sense of melody, with the acoustic rant of ‘Never Talking to You Again’ making a pretty good argument that punk never needed electric guitars, and the neo-psychedelic surge of ‘Chartered Trips’ ably displaying that Hüsker Dü could not be tied down by the restricted boundaries of hardcore.

Side 2 is even better, perhaps the most coruscating collection of songs ever committed to vinyl. Whilst still clinging to that angular sense of melody that was all their own, the band tear themselves apart, looking for answers. ‘Beyond the Threshold’, ‘Pride’, and ‘I’ll Never Forget You’ almost verge on thrash metal at times, brutally fast riffs assaulting the listener, whilst Bob Mould exorcises  his demons with a screaming fury. The third side introduces a more reflective sense of psychedelic pop, with pianos and shimmering guitar textures heralding the oncoming resolution of the story. Hart’s ‘Pink Turns to Blue’ is spectacular, another unflinchingly raw take on love and loss, whilst ‘Newest Industry’ has all the hallmarks of pop music, albeit with an acidic edge that would prevent it from ever being heard on the radio.

The final side is the real litmus test for punk, with Hart’s ‘Turn on the News’ providing an almost conventional introduction to one of the most abrasive and challenging assaults of the notion of what ‘punk’ could be – ‘Reoccurring Dreams’. In the songs 14 minutes, the three men pour everything they’ve got into the music, bending music in new and exciting directions as they go. It’s not punk, it’s not psychedelia, it’s not jazz, and it’s not rock. As the abrasive riffs and angular melodies assault you, all manner of swirling sound and texture whips up around you into a complete frenzy. Easy listening, it aint, but ‘Reoccurring Dreams’ remains a highpoint in American 20th century avant-garde music, and a fitting end to perhaps the most important album of the 1980s.

Released on the iconic SST label, Zen Arcade found fierce competition from its labelmates, with The Minutemen unleashing their masterpiece Double Nickels on the Dime (also a double!) and The Meat Puppets delivering their startling fusion of punk and country, Meat Puppets II. But even alongside such illustrious company, Zen Arcade stood out, bringing the band – and hardcore itself – to mainstream audiences, and making Hüsker Dü the toast of rock’s intelligencia.

But not content to sit back and bask in the glory, the band were already moving forward again, tearing into 1985’s New Day Rising. After the sprawling diversity of Zen Arcade, New Day Rising found the band focusing on the ‘pop’ side of what they do, alongside ushering a new vein of introspective and personal songwriting. ‘The Girl Who Lives on Heaven Hill’ and ‘Celebrated Summer’ are two of the band’s most affecting songs, crafting memorable and accessible melodies, and allowing Hart and Mould to express emotions rarely found in the world of punk. However, the production on the album is appalling, coating everything in layers of murk and distortion, sabotaging the directness of the songwriting. New Day Rising could have been the album that justified the critical plaudits heaped upon the band, and taken them out of the independent ghetto and exposing this music to a new audience, but the album is a punishing listen, arguably a reaction against the clean and direct sound of its predecessor. However, as a collection of songs, it proved that Hüsker Dü were without equals in the world of the American indie underground, and it was quickly becoming obvious that ‘punk’ wouldn’t be able to contain the band for much longer.

Whilst they were converting people to their sound with every release, Hüsker Dü were still firmly entrenched in the society and ethics of the underground, having to play by rules that somehow no longer suited them. In the world of 80s hardcore, ‘selling out’ was the ultimate crime, bowing down to the enemy and allowing them to turn you into a prostitute. To the thousands of hardcore kids across the country, this was a way of life, an attempt to live outside the system and play by their own rules. Hüsker Dü, on the other hand, seemed to be distinctly non-committal to their position in the underground, clearly interested in getting their music to as many people as possible, as well as enjoying the rewards that could bring. In the narrow confines of hardcore, Hüsker Dü had already incurred the wrath from the community by including acoustic guitars and pianos in their music, as well as staying in hotel rooms on tour, rather than slumming it on people’s floors. Clearly, Hüsker Dü’s drive and aspiration was going to come into conflict with the orthodoxy of hardcore.

Part II of The Story Behind: Hüsker Dü coming soon.