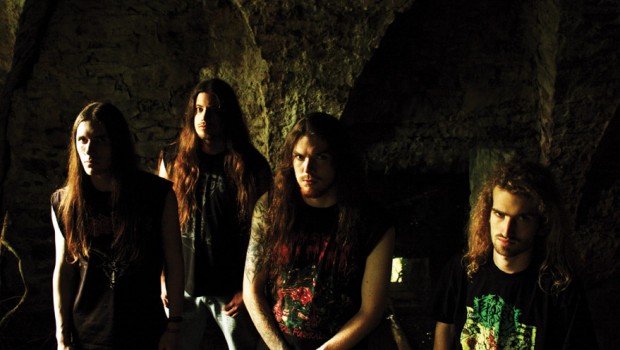 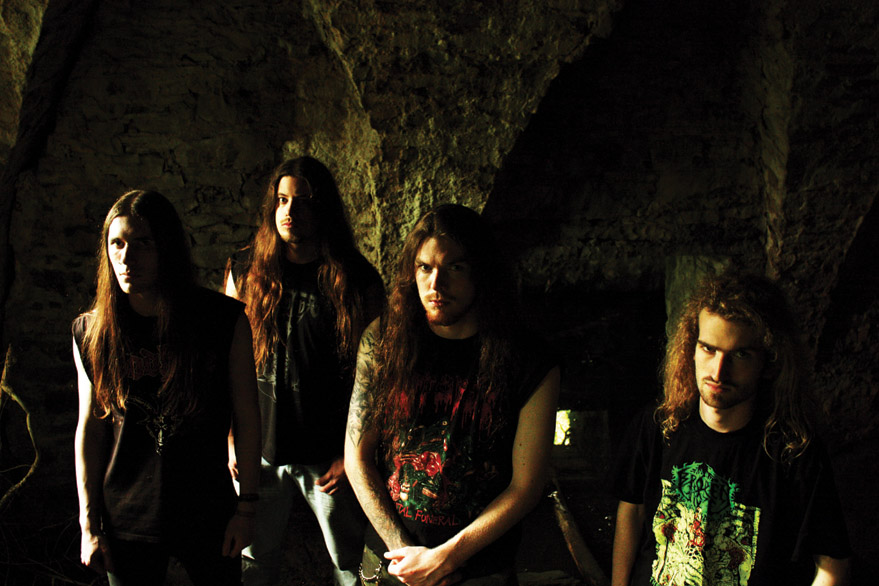 In the second installment of his Lost In Necropolis column, Conchobhar Ó Dochartaigh interviews Belfast death metal band Overoth. Eight years into their tenure, he gets their thoughts on everything from the musical technicality, lyrical themes and the current state of Northern Irish metal.
___

Tell us about the writing for the upcoming album. Recently, songs have been slightly more mid paced, giving a more brooding feel to the songs. Is this a conscious effort to bring more atmosphere to the sound, or has it simply been a natural process?

Daniel: It’s been a natural process. The older stuff was written and recorded before Jay (drums) was in the band. He has had a lot of influence on a lot of the new riffs and stuff, so that is a part of it, and it has been a part of the natural process. It still has Overoth at the core but there is a lot more atmosphere.

Andrew: Some of the songs still have fast parts but a lot of it is more mid paced, and it wasn’t until we looked back on it that we realised it was slower.

Daniel: It was not until we did rough recordings on our computers to listen back to them that we realised it was different.

The lyrical imagery of darkness, evil and despair is very striking. From where is the influence for these drawn?

D: The music speaks for itself. With regards to the lyrical content, they are shared between a couple of members. Personally, I draw influences from books and even games – but not in a nerdy way, more so the atmosphere experienced in certain games. When you get that into your head you can take it from there. Mainly fantasy, it is a bit of a cliché but it suits the music and the atmosphere. A lot of darker games like Eternal Darkness, Silent Hill and things like that.

This darkness is also conjured up without resorting to overt anti-Christian themes. Do you think that is an easy target which has descended into almost a lyrical trope for extreme metal bands?

D: I think it’s far too easy to go down that route.

D: Not to take away from other bands but in my opinion it almost seems childish at this point…

A: …unless you are that way inclined.

A: We don’t have those views. We don’t really care about religion so there’s no point in us talking about it.

What percentage of bands do you think do it as an earnest commitment to the spiritual aspect?

D: I would say a very small percentage.

You are obviously very deeply rooted in classic death metal, in both sound and imagery. Do you think both of these are important factors for this type of music?

D: I do actually. With metal, it is possible – to a certain point – to judge a book by its cover…

D: They do. If I walk into HMV to pick up a CD and the cover, logos and song titles look good and there’s a photo of four guys wearing t-shirts of bands that I also listen to, then I can make a pretty accurate guess at what it’s going to sound like. Obviously every band is different but with metal every band is influenced by another band in a way. A lot of times the music can be quite simple, but it depends on how they play it, like one of my favourite bands: Asphyx. The music is pretty simple, but the way they performed it on stage is so good.

D: When a band just stands there and plays their instruments, that’s fair enough…they probably play better, but I definitely think image is important.

[Note: when I pointed out they had been in the band for eight years they both exhaled and uttered a surprised “Fuck!”]

A: We mostly get it from the family.

D: Family members yeah, for example sitting around at Xmas having a drink with them, when it comes to picking a song to put on you know yourself … it’s probably best just not picking anything!

A: You try and be diplomatic and put on something you don’t really want to hear…

D: Aunties and uncles are always asking why you don’t do something where there’s a bit of money to be made but anyone who is into music knows the answer to that.

A: Mostly been just from family and work to be honest.

D: Yeah, by now though work have accepted it. It’s part of who I am and it’s my life.

A: I work for myself now, so I don’t have to answer to anyone.

Does this opposition make you more passionate?

A: Personally no. Do your own thing and fuck what people think, as long as you’re happy.

You have always maintained good connections with bands outside of the island, which has led to you playing quite a few gigs abroad. Your lengthy tour of Sweden was definitely the most impressive of these undertakings. How did these collaborations come about and what were the most important things you learned on that tour as a band?

A: The Sweden tour came about through talking to the bassist in Volturyon about a gig swap. They had a tour coming up and just asked us if we wanted to hop on.

D: We had been gigging but that was the longest run of gigs we had done, and we learned a lot very quickly. You get better prepared. You can do the whole partying thing for a couple of nights but…

D: It made us slightly more professional. We always were ‘sensible’ in that respect compared to other bands but we really learned a lot. It is about the music at the end of the day. You might only be playing for 45 minutes a night but playing anywhere, especially in a country you have never been to before, you want to make the best impression you can. Can’t be hungover.

A: It’s not cool. It’s just not fun sitting on a bus with a hangover.

Do you think working relationships with foreign bands is something which many new bands overlook, both in terms of feasibility and development of profile? Especially in the age of the internet.

A: It’s just an opportunity we took. If we hadn’t made those connections we would never have gotten onto that tour. You need to find like-minded individuals and speak to them because there might be opportunities. They might not, but if you don’t speak to people then nothing is going to happen.

D: In pop music people are caught in the idea that you need to ‘make it’ – you have to be seen in the right place at the right time. Like the X factor, if you don’t get through your dreams are over. Metal is more like a – cheesy word – brotherhood. We know it’s a niche. The internet helps things…although in a way it has spoiled some things because there’s a lot of shit to wade through. It is a lot easier to speak to other bands though, within a couple of seconds you can speak to someone across the world and arrange something.

Well, for a death metal band from Belfast, the opportunity to tour Sweden maybe wouldn’t have come about 20 years ago.

The musicianship in Overoth is incredible, effectively setting a benchmark for technicality in Northern Ireland. When you were learning, was proficiency seen as a requisite in order to play death metal, or did playing death metal come out of said technicality?

D: The strange thing is, a lot of the reviews of the album mentioned technicality, but I wouldn’t consider us, or my own playing, technical. It’s definitely getting less technical as the albums progress but we never really sat down to learn certain techniques or how to play songs in a certain way.

A: Maybe it comes from when we were just learning as guitarists. I learn a lot of covers just to teach myself new things, I used to play along to records a lot. Things like Iron Maiden, Decapitated etc.

D: The strange thing is, I’m the opposite. I probably to this day can’t play a full song by … anybody?  Of course along the way we have learned one or two songs, for example we have done a Pestilence cover but I couldn’t play it now. I’ve always pretty much done my own thing, listening and absorbing things. The technical thing still baffles me, but it is nice to hear.

Thankfully, you have never allowed playing to overshadow the song writing. Some bands concentrate simply on how fast they can play or how many time signatures they can fit into a song. Especially within the extreme metal scenes, do you think this is a problem?

Although death metal will always be a niche market, Northern Ireland lacks even one annual extreme metal festival (of any or all genres). Do you think this is something which could ever be feasible, or will it always remain confined to small one off shows?

A: I don’t think there are enough metal fans in this area, or even in Ireland as a whole.

D: Yeah, it is a problem, especially with local bands. We played a couple of days ago and there was not a lot of people there. Sometimes you can go to the same venue, for e.g. Amon Amarth, and people will come out of the woodwork for the bigger bands. Which is fair enough, with bigger bands there is a bigger crowd but there are higher costs. For promoters it’s a very hard call. There have been things like Day of Darkness but the promoters just lost too much money.

Pity, they were great.

The Distortion Project 10 Year Anniversary was the last big event wasn’t it?

D: Yeah, it was and that was two years ago.

How is the writing going for the new album? What do you hope to achieve with it?

A: It’s pretty much there. We’re still playing around with some things, and there are still a couple of songs we’re working on, but some of them might not make it onto the album.

D: At the minute we do have enough for an album but we are waiting until we are in a better position to record and then we will pick and choose the final cut. We are ready to go, but it’s more a question of picking a studio and finding time and money.

Will you record it all in Northern Ireland?

D: We have thought about going somewhere else, but we do have someone in mind. He does know the music and the sound but that is just an option. We’re concentrating on the music.

Are there are other Northern Irish bands that you’re currently enjoying?

D: There are quite a few bands cropping up.