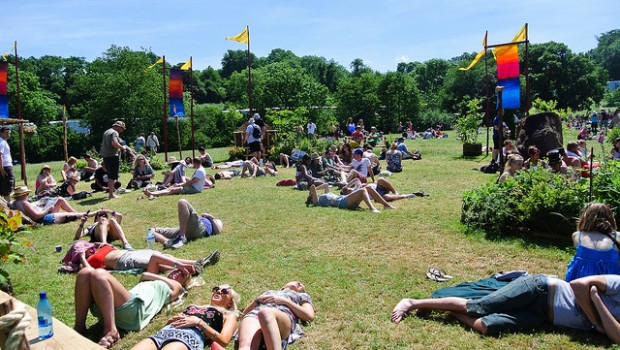 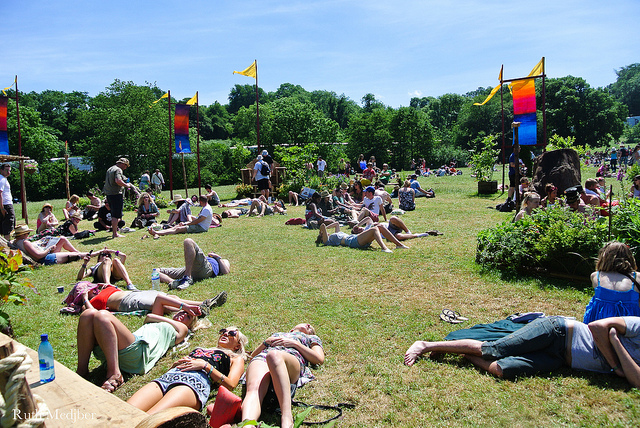 I’m writing this from my bitter pit of despair. Post-Glastonbury Blues will one day be a recognised as a legitimate illness and I know that there are 180,000 people feeling as horrific as I am today. Our beautiful festival has ended and the reality of the 9-5 has sunk in. Strangers don’t high five you on the way to the loo, there’s no warm cider on the canteen menu and I’m pretty sure my boss will frown upon me standing on my desk and screaming “I LOVE YOU GLASTONBURY” every so often.

2013 was to be different from other years as it was my return to the festival after a lengthy 5 year break. This makes it my 6th Glastonbury in total, each experience being completely unique and incredibly spectacular. This year we decided to rent a touring van and get the Glasta-ferry with our elected main man John as our driver/saviour, doing a total of 14 hours behind the wheel. It’s a hard slog, awkward and expensive. For those that have been before, it’s a no-brainer but for Glasto virgins it takes a lot of trust in the stories of your mates to commit to such a trek.

We had 9 in our immediate group (3 noobs) and convoyed with another group of 6. Then there’s the endless circle of friends that you have every intention of meeting up with while you’re there, but something shiny distracts you and you never quite make it to the Green Futures area at 2pm like you said you would (sorry Rory, Philly, Steve, Maeve et al).

We arrived on the Wednesday afternoon, merry and excited after a thankfully uneventful journey. Some might think arriving so early is absurd considering the official line up doesn’t start until Friday, but they’d be wrong. Some hardcore folk even sleep in their cars on Tuesday to get first pick of the campsites meaning most areas are full by 11am. Everybody wants to squeeze as much as they can out of this festival.

The first thing that hits you when you enter the festival is the effort that people have put in. All around you there are sculptures, wall hangings, giant murals and hilarious flags. Every single surface has been considered and lovingly decorated. You realise that vendors and volunteers have been on site for weeks preparing this transitory world simply for your enjoyment. Instant happy faces all round!

The next thing that hits you is the sheer size of the site. Looking at a map before you travel cannot prepare you for standing there at Pedestrian Gate A and facing the long walk to the nearest available campsite. Walking is a theme of Glastonbury, you do a lot of it but as long as you pepper the way from the John Peel Stage to the Park Stage with 3 or 4 cocktail stops, you shouldn’t be bothered by it too much.

The weather was on our side this year. We had a rainy moment on Thursday evening, nothing major, just enough to give us some sploshing time in the obligatory Glastonbury mud, but after that it was blistering heat throughout. Every where you looked people lay out and took in the sunshine and the music.

Let’s be frank here, nobody goes to Glastonbury for the bands but when you do catch an act, you’re nearly always left speechless. Alt-J were by far my favourite act of the weekend, they stormed through a very short set on the Other stage while the crowd made up nonsensical versions of the lyrics and sang along. Tom Odell stole my heart for a moment on Sunday. His debut album just reached Number 1 that week and it seemed like every female on site was crammed into the tiny tent to catch a glimpse of the boy wonder. I owe my amazingly patient friends a lifetime of hugs for hitting this one with me. They must have been the only blokes there but I think I spotted a glint of Tom love in their eyes towards the end.

It wouldn’t be a Glastonbury tale without a mention of my beloved Hare Krishnas. They draw you in with their delicious free food (I tried to snap a pic but it disappeared too quickly into my belly!) and they entertain you with rhythmic tunes that you sing in unison all weekend. Yes, we know it’s a prayer chant, but when they put a techno-bongo beat behind it you just can’t help but dance!

The world’s greatest writers, photographers and story tellers could never do Glastonbury justice. I would urge everyone that loves a good festival to put this on your bucket list. As soppy as it sounds you will return home with a new perspective on people and a greater love for life. You’ll begin counting down the days to next year (355) and toasting our Lord, Michael Eavis in every post-fest pint you have.

I leave you with the words of a 2013 Glastonbury virgin which sum up the random moments of sheer love felt by all: “Unicorns, psychedelic cats, Shangri-La, Sacred Space at night, the piano bar in the woods, Gangnam Style grannies, fancy sushi restaurants, loads of new friends and some mighty fine music. That was literally life changing. Glastonished.” Ruth Medjber