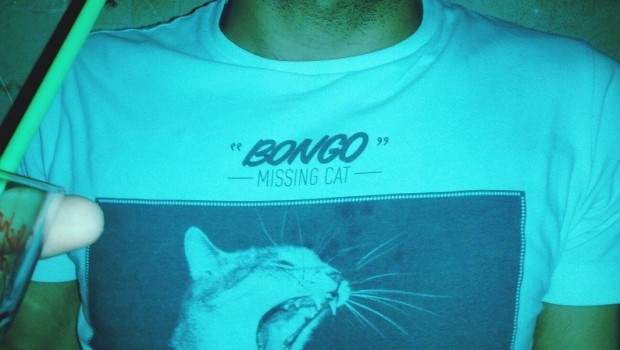 Beyond Berghain: The Authentic Berlin Experience 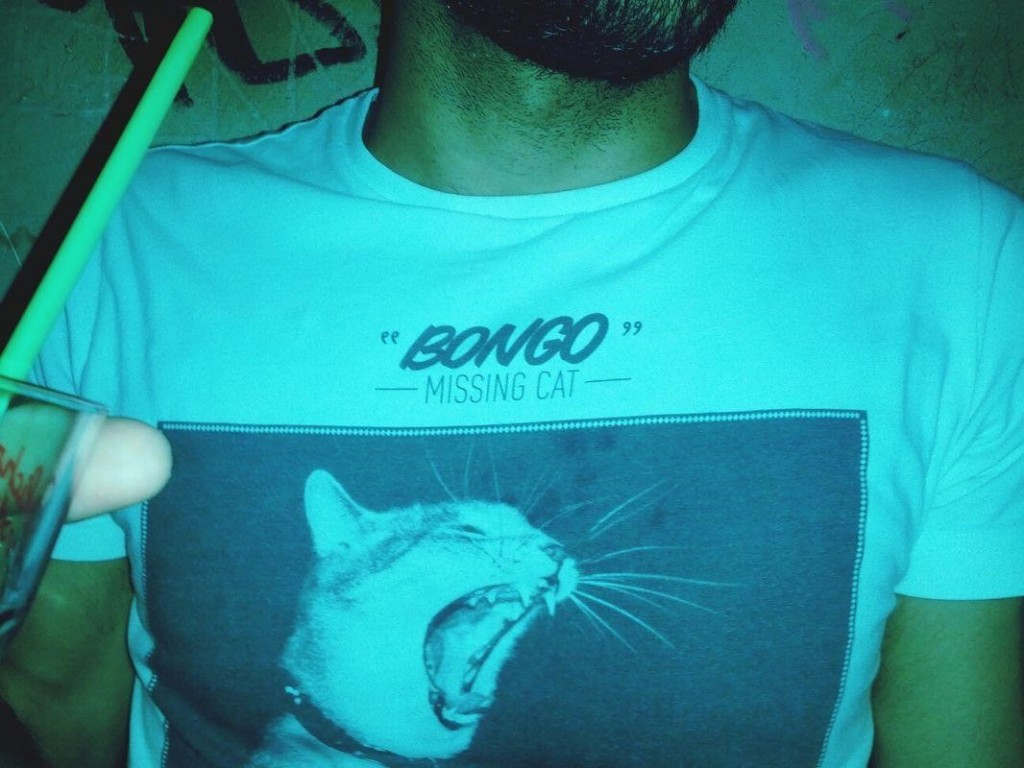 If you have recently thought of visiting, moving to, or simply losing a weekend in Berlin, let me first of all congratulate you. Your sense of judgement is sound. In the words of Metronomy – if you’ve got to go to Berlin… GO.

Everyone knows Berlin is quite actually the Laney Boggs of the world. Even when it wasn’t “hot” (thanks Cold War), David Bowie was living here, for Christ’s sake. And, again, like She’s All That, no one was particularly surprised that the moment Berlin took off her glasses (bye bye Wall), she became a shit-hot babe.

But, sadly we all know that popular things often lose their hotness fast. Sure, there’s the Brandenburger Tor and Berghain, but trust me – this city is dripping in many more awesome and tourist-free alternatives, to suit any appetite or desire.

If you want to dance…

OK, OK – Berlin didn’t get this party reputation by just lounging by the pool all day. Berlin dances. But if, like me, you actually like a real shakedown, instead of just a face-chewing gyration, you have to look a little further beyond the regular mega-clubs and house parties. 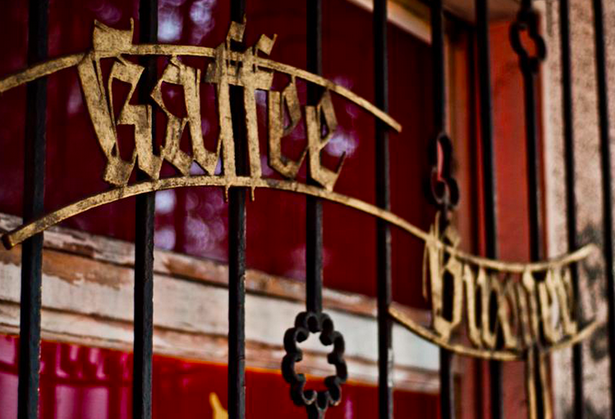 Kaffee Burger is not a coffee and burger. It is a Russian gay disco near Mitte. Like upstairs in White’s back in the day, it’s a little like walking into your granny’s living room. Fast forward a few vodkas and suddenly it’s 1972 and everything’s spinning. Mega craic.

Sameheads is in general, a wonderfully surreal location. Hosting amongst other things, comedy nights, quizzes, film nights, it also is a super little bar and club. My personal cheesy favourite is Hot Pony – A Night of Boogie Disco Brainwash. How could you not like that?

And, my very recently discovered favorite is none other that Süss War Gestern. Strolling in, it has a very similar vibe to both Sameheads and Kaffee Burger – surreal with a touch of the funky past. Halfway through the night, I discovered the second room. Cue sheer delight. High quotas of hotties and a lot of dancing, with both rooms serving the past and present perfectly. If you’re going, give me a shout first, the first round’s on me!

If you don’t love beer…

Well, you made a bit of a mistake coming to Germany then, didn’t you? Only joking… kind of. Nonetheless, Berlin has some yummy wine and beer-free options. Remember that scene in Harry Potter (come on, we all do) where he goes to get his magic wand? The old man can look at him, deep into his soul. He tries one wand out for size, before shuffling back with THE EXACT WAND the buyer needs. Now imagine this exact scenario, complete with dusty shelves and rich mahogany, except with wine instead of a wand. This is Vin Aqua Vin on Weserstrasse in Neukoelln. Often getting tipsy along with you, Jan has a clear passion for wine, superseded only by his passion for drinking it. I definitely prefer this magical wine experience to any wand. 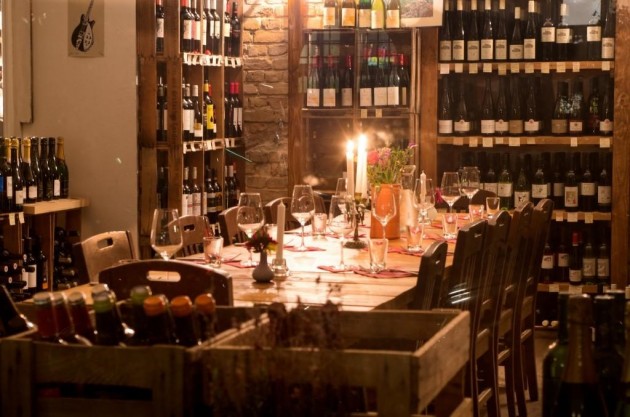 (Psst, if magical hand selected wines from the deepest, most hidden vineyards is not your thing, then check out Weinerei in Prenzlauerberg. Pay what you want and help yourself to a selection of wines available. Mixed clientele, classic Berlin shabby chic and friendly staff. Just don’t be a total dick – it’s called an honour code for a reason!)

If you love hip hop…

God help you. London may be bouncing in hip hop, but not so much in Berlin. That’s only because people here have good taste in music (wee jokes lads, wee jokes).  But don’t despair, even you Drake fans can indulge yourselves.

On a larger scale, you can always wiggle your way down to Prince Charles’ Burgers and Hip Hop night in Kreuzberg. Seemingly an unlikely event for a bona fide Berlin nightclub, this is an incredibly popular night. Come early and be prepared to queue, chow down and dance the night (and burger) away with the best of them. 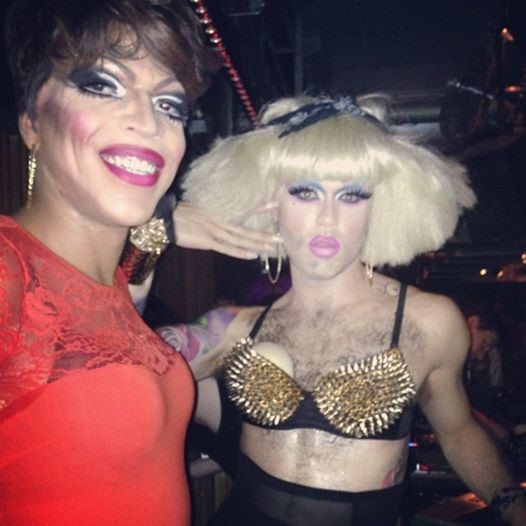 Photo courtesy of the Burger and Hip Hop community.

If you prefer your hip hop with a little more grit, try out “It’s bigger than Hip Hop” at BASEMENT. No polished nightclub here, it has been described as a large toilet (it’s very inexplicably tiled and no surprise, in a basement) but the drinks are fast and cheap, the music is solid and if you want to dance as one, huge, pulsating sweaty mess – this is for you.

If you want to see the superstar, but skip the arena…

Of course, Katy Perry and Kylie will be going to the O2 World. If you’re not sure where that is, it’s the absolutely fuck-off-huge corporate-looking place near the East Side Gallery, with a massive O2 on it. But, does anyone actually like these monster arenas? Nein.

Authentic alternatives to see some bigger artists include the likes of Postbahnhof and Astra Kulturhaus.  Both boasts both moderate size and great acoustics, and it’s here you’ll get to see the reasonably successful bands and skip on the arena tours. 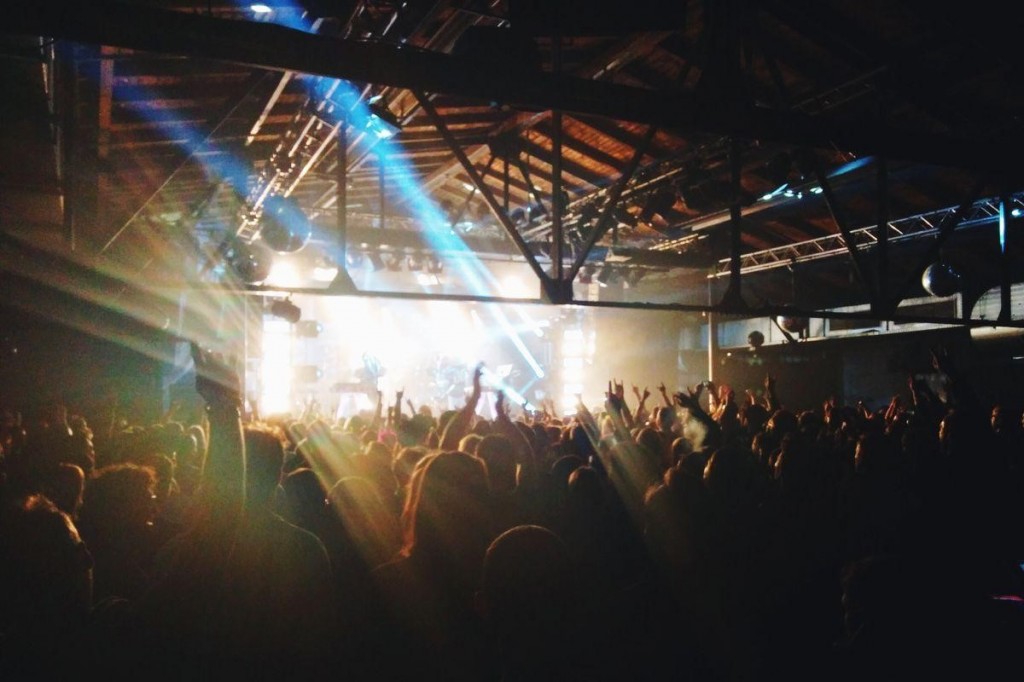 Kellar is, once again, in a basement, but it’s a really cool venue. Underground in every sense of the word, once you slip downstairs into this rabbit warren of rooms, it will be some time until you emerge. Different rooms open for different events, but the stage is small and intimate, and good for local talent.

If you can’t squeeze enough in, try combining your dinner (or tattoo) with some live music. The previously hyper-touristy White Trash Fast Food recently upped and moved from their previous location to a much bigger, much cooler location in Kreuzberg. A restaurant with a door tax, performances start from 10pm or so (that’s an indie-rock time, so it’ll probably be 11pm) and you can chow down on some (more) awesome burgers. Or get a tattoo.

Gigs are thrown everywhere and often. Besides the classic venues, I’ve been in dark basements with dripping walls watching Swedish death-metal bands, on the streets watching reggae floats and in parks watching DJs do their magic. You won’t be on a hunt for music for long.

If you’re salivating for schnitzel…

German food is legit. Forget about those terrible pretzels we get everywhere else and trust me – Germans are keeping the best stuff for themselves at home. So while you’re here, fill your boots and taste the good stuff.

Scheer’s Schnitzel is dirt cheap and hella good. I’d go so far as to say it’s one of the best in the city. Near Warschauer Strasse, it’s located under a bridge, and everything costs less than 5 Euro. Don’t be put off by appearances, these guys have a basic menu which they have perfected. 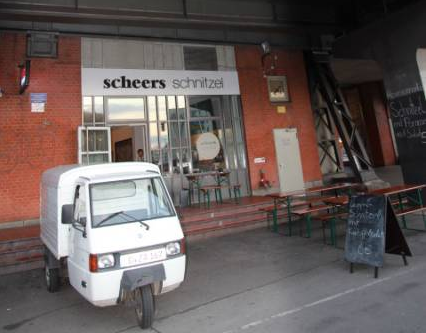 Something you will have likely never heard of is maultaschen. A little pasta parcel of meat or veg, the legend has it that German monks created them to sneak some good stuff on their plates on days of limited fasting. I always trust monks know what’s what. I had never had these before coming to Berlin and holy smokes, they are great. I have several favourite maultaschen spots around the city (you never know when the craving will hit you) but the best is probably Kindl Stuben in Sonnenallee. Lashings of fried onions and cheese and served with salad, these babies will kill or cure you. 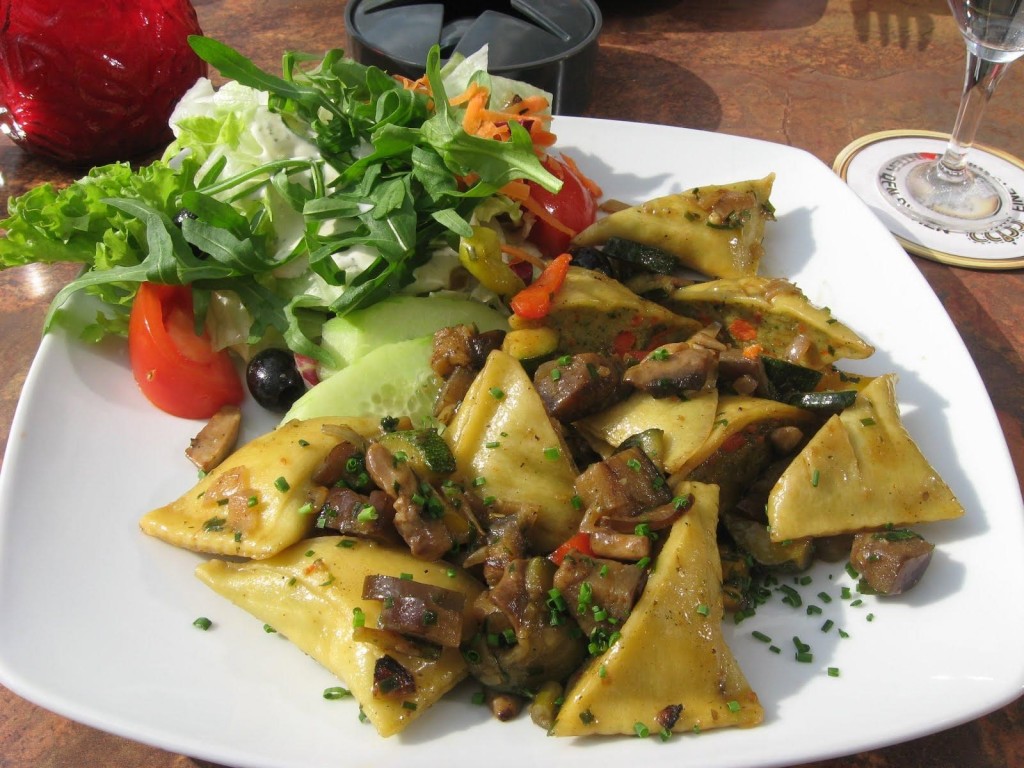 If you’re vegetarian or vegan, you’ll think you’ve died and gone to heaven. There are veggie-friendly options everywhere in Berlin. On the pricier side of things, check out Cookies Cream or Mio Matte. Alternatively, try basically any Vietnamese restaurant. Everyone loves Hamy by Hasenheide, but just down the road is Tung Long, which is far superior.

Personally speaking, I’d throw in a shoot-me-if-I’m-wrong recommendation for Kokolores, which is a real personal favorite. The food there is simply sensational, and your bank manager will not be calling you the next day. The girl’s bathroom is covered in pictures of guinea pigs, you eat off doors and if Pierre is serving you, you’ll get a side order of flirty winks. What’s not to love?

If you want to get naked…

Germans love to take their clothes off. And you know what? It’s flippin’ great. I conquered my first sauna last year and now you can’t keep the clothes on me. Freikörperkultur (FKK) is the notion of free body culture, and whilst not everyone is perma-nude, it’s definitely more in the psyche of this entire country to be cool about nudity than in Ireland. If you want to try your hand at getting your whips off, here’s where to do it.

For the first time nudey, I’d recommend the sauna. It’s weirdly NO BIG DEAL that everyone is chilling around, swimming, sunbathing or hanging at the bar in the nip. Yes, that’s right – there’s bars in the saunas. This is no sweat box at the back of the Robinson Centre, saunas in Berlin are big business and you can spend hours upon hours in them. Stadtbad Neukölln is pretty lovely with the rooftop terrace, high from prying eyes, but if you want real luxury, check out Liquidrom. With an ambient audio visual pool dome, it also has waiter service, hot tubs and many variants of types of sauna. If you’re going to do it, you might as well do it right. 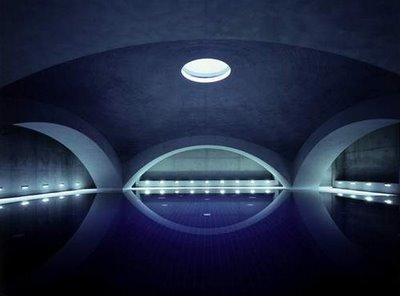 The sun comes out in Berlin and everyone is at the lakes faster than a spide takes his top off in Belfast. The lakes are great, and again, are seized as an opportunity for nudity. This is good for the level 2 nudity fan – I haven’t got naked at a lake, but it’s pretty frequent and mainstream. Lakes are either designated as strictly nude, or have specific areas for the FKK fans. Remember kids – it’s rude to stare!

The final level nudity fan can trot down to the KitKat club. A fetish and techno club, the strict door policy (bondange, leather, high glamour, etc.) seems a bit redundant when everything can be whipped off inside. No pun intended. I won’t be buying the first round of drinks in here… Cat Anderson 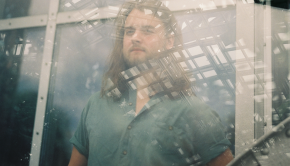 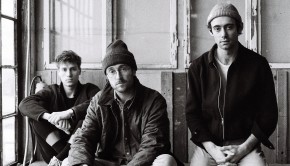 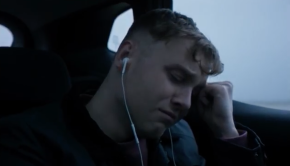