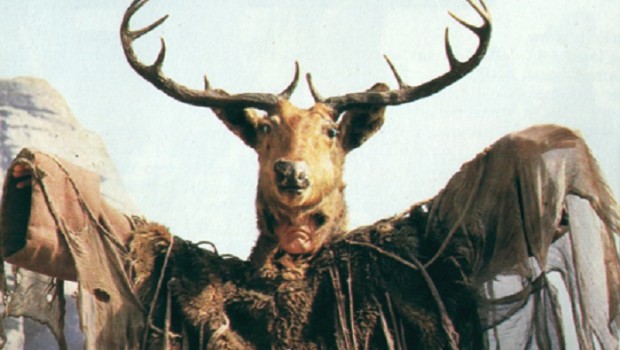 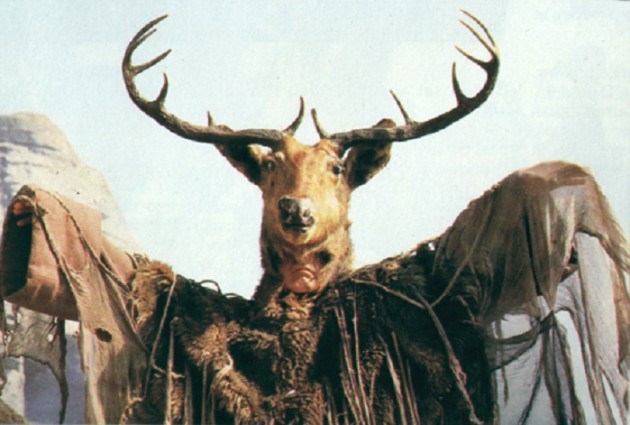 Telly used to be odd. Often that oddness was on purpose. I’m not talking about the “Alan Partridge pitching on nothing” oddness of shows like Splash or Who’s Doing the Dishes? – Through the Keyhole meets Come Dine With Me presented by the fat one from Westlife. Those shows are obviously just a disgusting waste of time from the ground up. No, I’m talking about the flavoursome, nutritious, umami weirdness of older shows, made by hippies who were trying to communicate something and allowing all manner of folksy freakishness to seep in.

Robin of Sherwood, Richard Carpenter’s hour long Silvikrin commercial was tea time television in the early eighties and was quite literally bedevilled with old, weird tropes. There’s Herne the Hunter, Robin’s adoptive dad, who was both a corporeal man, a healer and fixer of bones, and the elemental embodiment of the forest, suffused in green light and wearing a dead animal as a hat. Herne proved ineffable, with his ability to speak without moving his lips through a ring-modulator. Robin battles not only the Sherriff of Nottingham (a deliciously camp Nickolas Grace) but in Crom Cruach a pre-Christian glove puppet and in one episode he thwarted Rula Lenska’s dastardly scheme to summon the devil himself. 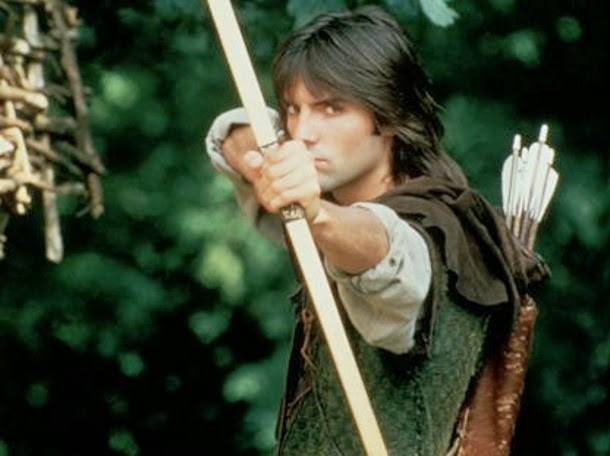 Each week he and his merry men were tricked, bewitched, enchanted and possessed. Robin even managed to die and be reborn, like John Barleycorn the spirit of the field (or, more likely, given its time slot, like Dr. Who), although he came back rather shitter.

In the Children of the Stones a magus uses the power of eon’s old weird-stones to place a series of events in perpetual motion.  Even when Blake from Blake’s 7‘s clever son manages to break the spell, the pattern merely reconfigures in a slightly different permutation, an either-ouroborus; a snake eating someone else’s tail. 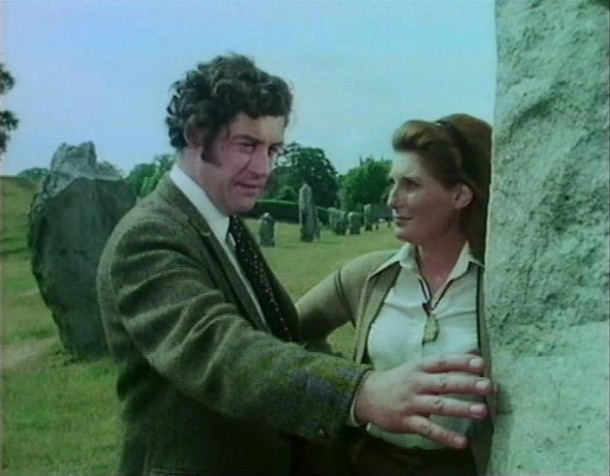 Raven, featuring a double denimed Phil Daniels as the world’s cockneyist boy, is a catalogue of “Folk Horror” tropes, featuring, variously: a spirit guide, the titular raven, a wander through a warren of sacred caverns, mystical time slips, astrological symbols, an authority figure who learns the error of his ways and Phil Daniel’s character who is the reincarnation of King Arthur. It is equidistant between the Children’s Film Foundation and Nigel Kneale’s Quatermass and the Pit. Indeed Nigel Kneale’s signature is all over the folk horror genre; his final “Quatermass” outing the “The Quatermass Conclusion” pits John Mills’ beleaguered and hopeless scientist against the triple threat of a future dystopian society, young people and a pummelling energy beam from outer space that centre upon stone circles. Of the three young people seem to be the worst, the mindless chanting hippy/punks called Planet People, in their leather blousons and face-paint who want to beam to another planet. It’s an older man’s disgust with the world turned into speculative fiction – in the end all Quatermass can think to do is blow everything up. (Kneale, for all his greatness, has a history of this sort of peevishness. His misjudged comedy Sci-fi series “Kinvig” was conceived solely to take the piss out of the attendees of Sci Fi conventions). 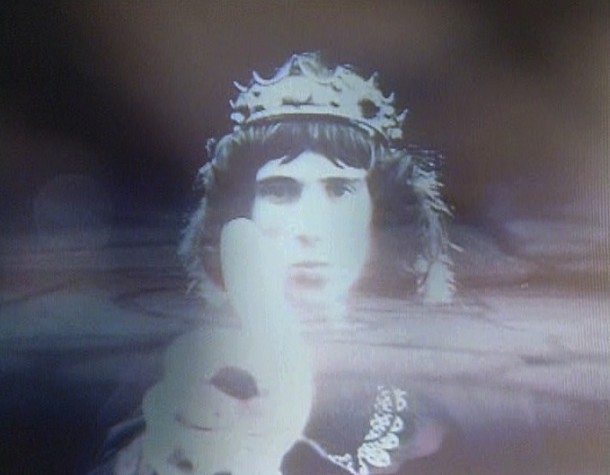 Much better is Kneale’s Murrai, a deceptively worthy drama, where backwards, inbred types, shepherded by Bernard Lee, attempt to starve out an old woman in a remote Yorkshire farming community. That the educated intruder, a big city vet, is not ultimately the recipient of cunning justice is an anomaly, though the ending is gratifyingly ambiguous for both that character and the viewer.

An echo of folk horror could be found in the oddest places in the seventies. Avengers and The Professionals writer, Brian Clemens, produced a series called Thriller which was, in the main, a collection of tortuously overlong detective stories, but even here folk horror ideas push through like mushrooms in the night. Spell of Evil sees centuries old witch, Diane Cilento (whose folk horror credentials are impeccable, having played the school teacher in The Wicker Man and actually given birth to that second, slightly disappointing “Robin of Sherwood”)use a dating agency to ensnare wealthy widower Edward de Souza (“The Man in Black” himself!). She is foiled when his secretary recognises her from a wood-cut of a witch she remembered from a visit to a museum as a schoolgirl!

Better is the prosaically named A Place to Die, where a doctor inherits a practice and brings his new American bride, Alexandra Hay, to live there. The locals are entranced by this “moon pale and moon golden lady”, especially when they see her limping due to a broken bone in her foot. Of course, it soon becomes clear that their affection comes at a price – they want to marry her off to Satan – clearly there’s nothing about bigamy in the local by-laws. 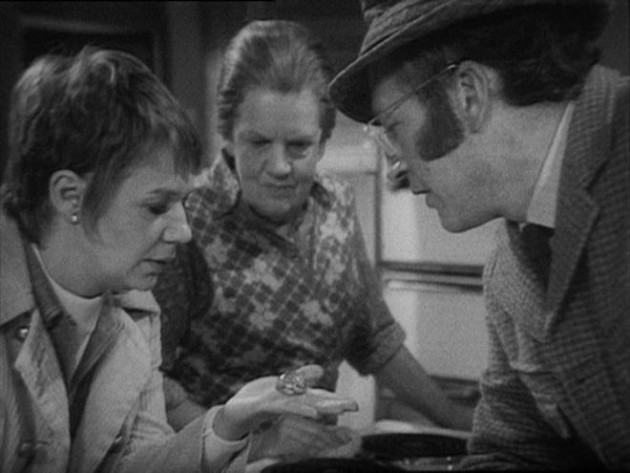 The action is an effective bowdlerised and colourised version of John Bowen’s extraordinary “Play for Today” Robin Redbreast. Made in 1970 Robin Redbreast is a dowdy, dry run for The Wicker Man: metropolitan outsider visits remote rural community and becomes embroiled in games that she cannot understand. But whereas Anthony Shaffer’s script for the film was as much about games and rules as it is about the bloodier end of druidic ritual, Robin Redbreast is suffused with a much quieter sense of unease.    Its antagonists, especially the learned Mr. Fisher, are unhurried and timeless as standing stones. In fact they take on, with the grainy patina of BBC black and white, the quality of stone: impassive, eternal, of the earth.

Redbreast’s protagonist is very different from the straitlaced Sergeant Howie too. Norah (beautifully played by Anna Cropper) is a cynical and jaded mid-thirties sophisticate. The scenes with her louche London friends see her swigging drinks and laughing at the locals. She is charmed and quickly bored by local stud Rob (Andy Bradford), in his karate knickers, only sleeping with him when he saves her from the flock of birds that the locals have stuffed down her chimney! Your move, Dr. Freud. 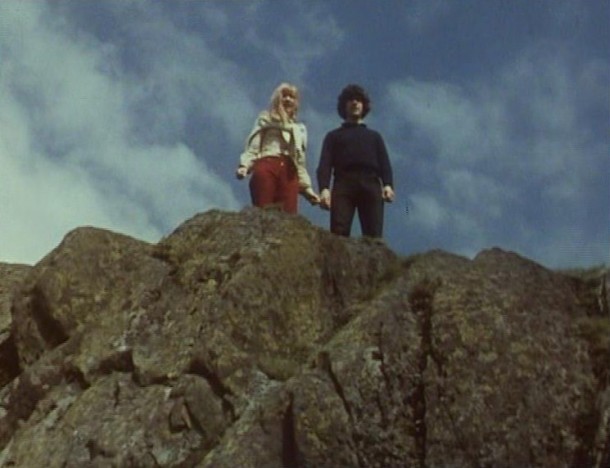 Almost contemporaneous and altogether more colourful was The Owl Service, the story of three children, played by palpable adults, who re-enact a tragedy from the Mabinogi, the story of Blodeuwidd, a woman made of flowers who betrays her husband for another. The children take on the personas of this triangle and it is revealed that the story may have been re-enacted before and perhaps needs to be acted out through each successive generation. In stark contrast to Redbreast, The Owl Service is in vivid, arresting colour, each of the children colour coded throughout – Alison in red, Gwyn in black and poor Roger in a pair of tiny green shorts throughout. Who wears short shorts? Roger does and it does nothing for his mood. The editing is kinetic, with great striding jump cuts and huge, body-paint spattered close ups. Its sense of peculiarity and unease starts from the credit sequence, its eerie combination of images and sounds: a guttering candle, a motorbike’s throttle, Welsh harp, a pair of shadowy hands morphing into a bird, the sound of something scratching. It is the entire story distilled into a few seconds of strange, elusive animation.

These programmes seem wordy and flat today. Their pacing is slow, the effects are dated. The lack of money afforded them obvious. But they had a weight, a charm, even gravitas – they were trying to propose ideas, to challenge and engage.  I think they did. Here’s to the health of the old, weird, telly. John Higgins

A Fiend in the Furrows: Perspective on Folk Horror in Literature, Film and Music takes place at Queens from 19-21 September. Go here for more information.