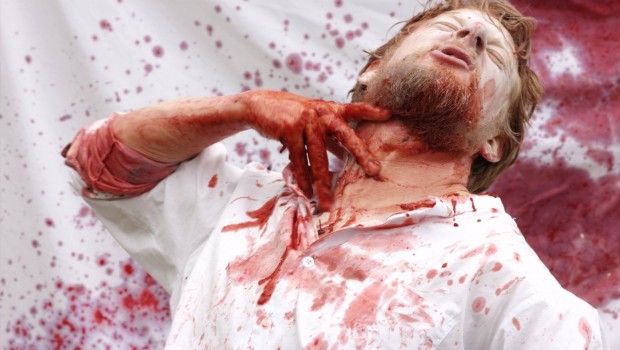 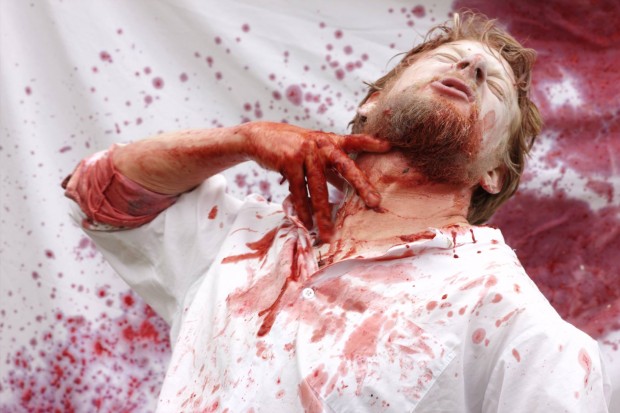 Written by Tim Crouch, I, Banquo is a retelling of Macbeth from the perspective of his dead friend Banquo. As the play begins the ghost of the titular character rises from the floor and tells us his version of events, from the fateful meeting with the three sisters to the gruesome finale. Banquo addresses us as Macbeth and asks us to question our own motives and desires along with the other characters in the play and leaves us wondering if perhaps we’ve misunderstood.

Directed by Oisin Kearney and performed by Michael Patrick, the pair take a low-budget approach and use it to amplify all of the rage and sorrow of Banquo as he (literally) paints his emotions over himself and the stark stage. Bare, save for a few white sheets, a small podium and a white bucket filled with blood, the stage serves as little more than a conduit for a powerful performance from Patrick. At times roaring malice, at others mocking his peers, Campbell as Banquo spits fire at the audience before turning, just as quickly, to reflect on his own piteous fate.

And he would have you pity him. Sometimes damning the audience as MacBeth and sometimes almost pleading with us to validate his own misgivings and feelings, Banquo wants you on his side. Yet as justified as you may think his outrage is, one can’t help but wonder if Banquo himself is wholly good-natured. Dripping with envy, his words lash out and tear through his enemies. ‘It could have been me,’ he reminds us again and again. ‘It could have been me.’

What if the prophecy had have been reversed? He forces us to wonder. What if the three sisters had told of Banquo’s rise? What would have changed? It is easy to imagine that events may not have been so different, with roles being swapped instead of eradicated altogether.

Although the play is told mostly in modern english, Kearney and Patrick have elected to add excerpts from Shakespeare’s original Macbeth to their own production. Including a dissonant, unnerving voiceover of the three weird sisters and numerous other speeches voiced by Patrick as he briefly inhabits another character, the pair have managed to both anchor their version of the play to its source material and yet again ask us to reinterpret the events that took place. The fantastic sound production stacks on the atmosphere by working around the central performance of the play without drowning it out. It forces the viewer to concentrate as the tension rises and rises, cracking like a whip to demand our attention.

The play begins with booming cracks of thunder and a corpse rising from a white sheet on the ground to lend our ears and ends with a blood-drenched spectre stalking the room, unleashing all of his fury regardless of who is listening. As his wrath boils over, the stage and Banquo himself are slathered more and more with the blood, showing us that as ugly as his enemies and former acquaintances are portrayed, Banquo’s hands are just as unclean.

“It could have been me.” Gavin Turtle