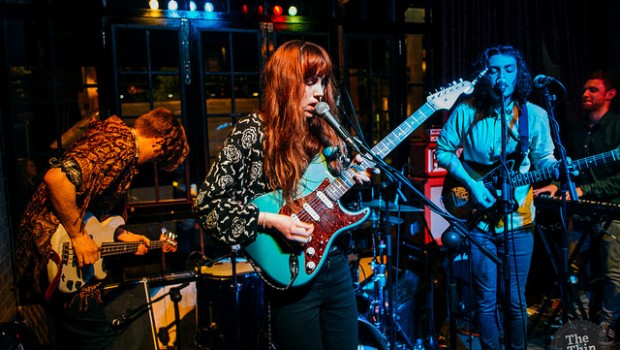 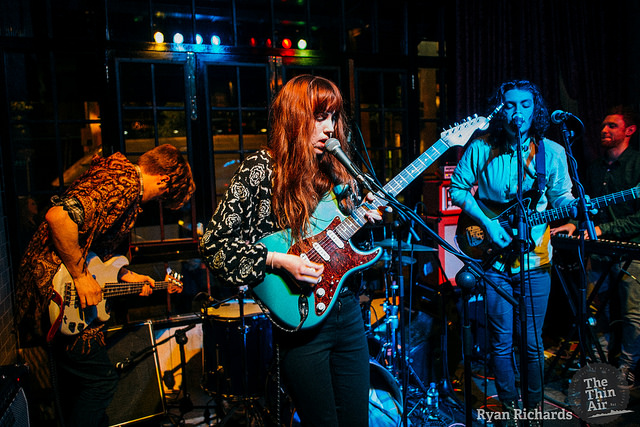 More a pub than a performance venue, The Woodworkers is certainly an interesting space, and upon entering, we were happy to see that the sizeable crowd were largely there for the same reason as us – to watch some glorious live music from Dublin’s Princess, rather than pint it up before heading onwards. Princess wouldn’t come on until 11.30pm though, so we were treated to an eclectic selection of tunes from Chris Jones in the meantime, whose penchant for house and some very funky electronica kept our heads bobbing quite happily until the main act were setting up.

Then, at 11.20pm, that familiar, fantastic moment occurs when the crowd start to move towards the front of the venue in anticipation of the band starting. Those excited footsteps, ours included, move us toward the entrance, where Princess stand before us, instruments shining, ready for action. It begins. They start tamely, easing us in to the performance with breezy melodies and vocal harmonies that aren’t too heavy but aren’t soft either. The dynamic is interesting too, as Liam seems to play off of Aoife and vice-versa. We’re noticing that more people are surrounding us, as all eyes are pointed firmly at the intimate stage, with folk clambering up onto the stairs for a better vantage point of the action.

Princess are quickly becoming energetic, enthusiastic and their aptitude for performance is immediately apparent as they run through tracks like ‘Molly’ and ‘Neverlook’ with joyous abandon. They’re loud and incredibly tight, and although they began their set with fragility, this is a band that is anything but delicate. It’s intriguing too, watching them take their songs and experiment with them. At one point, we’re certain that they’re wrapping up a track and then they begin to stretch it out, jamming with it and bringing us with them on their journey. It’s difficult to look away, and the fun they’re so obviously having is contagious; the crowd bounces with them as they play.

They’re very gifted musicians too, and it’s a testament to their disciplines how complex their arrangements are at times, but they pull it off with such ease that it’d make you think that anybody could do it with the same gusto. They couldn’t. The sound is crystal clear, and as Princess begin to wrap up their set (It’s short but very sweet) there is a definite feeling of amazement. Clearly, this is a band who are going to be massive, and we feel like we’ve caught them at the perfect point in their career so far – playing at such an interesting and intimate venue. As they round off with what can only be described as meticulous and forceful jam session, with all the passion and fury of a mid-career My Bloody Valentine, we overhear someone saying the truest and most accurate description of the gig: “I’d have paid to see that.” It’s true, Princess, we really would have. Aaron Drain