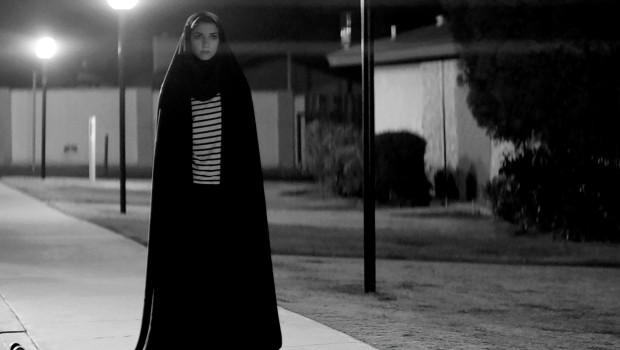 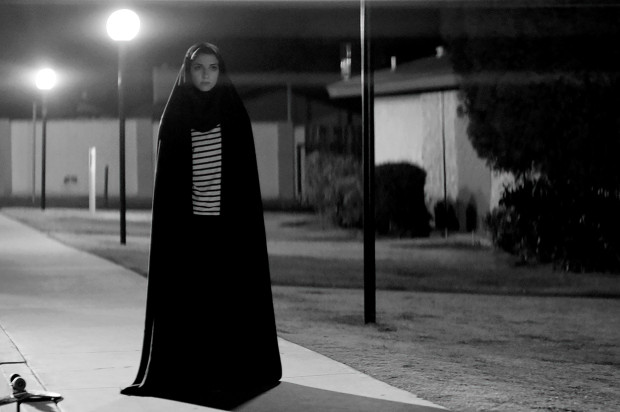 Taking just as many cues from US and European independent cinema as the classic horror canon, first-time feature writer-director Ana Lily Amirpour meticulously crafts a striking new-wave romance, in, what could very well be, the finest vampire flick of the decade.

“Vampire romance? Ugh!”, I hear you groan. Rest assured, A Girl Walks Home Alone At Night is more than the sum of its parts, worlds away from those much-loathed teen melodramas of recent years. Instead, Amirpour presents a dark, postmodern tale of loneliness and desire, set amongst the industrial ghost town of Bad City, Iran.

The motives and actions of the characters, however, aren’t so black-and-white. Protagonist Arash (Arash Marandi) thinks nothing of pocketing a pair of expensive earrings, nor does his father (Marshall Manesh) consider the consequences of his heroin addiction and subsequent debt – yet they are sympathetic, downtrodden souls. Petty thievery, casual vandalism and drug-dealing are often just another way to get by. Amirpour doesn’t present herself as above these characters, retaining an air of empathy with even the most unlikeable players – with the possible exception of Saeed ‘The Pimp’ (Dominic Rains), who is brilliantly repulsive.

Ultimately, there is a palpable loneliness that resonates throughout the film – a universal trait amongst every one of its characters.

However, none are more lonely than the titular ‘Girl’: confidently portrayed by Sheila Vand in, for my money, this year’s most iconic role. The combination of striped shirt, skateboard and jet-black chador is inspired yet organic. Vand’s 187-year-old vampire glides along the streets of Bad City, bat-like, in a post-punk re-appropriation not only of the classic gothic trope, but also the stereotypical role a Middle-Eastern woman might be expected to play in Western cinema.

“It’s not that there’s not cool Iranian roles out there, it’s just that they’re always about being Iranian” – Sheila Vand, Vice.

The Girl’s victims are more-or-less restricted to thieves, pimps and prostitutes – those who won’t be missed if they suddenly and mysteriously vanish. Of course, as Amirpour suggests, none of these people are necessarily evil – a struggle the Girl comes to terms with later in the film. Whether she stalks and mimics her prey like a cat, or lures them in with her quiet demeanour, Vand’s portrayal is one part yearningly vulnerable, one part fearlessly cruel – in an early scene she applies her mortally-wounded victim’s bloody, severed finger around his mouth like lipstick. A gruesome image – even in monochrome.

Amirpour communicates many of the story’s subtleties through understated hand gestures and patient eye movements. There’s hints of Bresson, Jarmusch and Leone; the latter emphasised by Federale’s Morricone-inspired soundtrack. Arash and the Girl’s conversations are relatively sparse, but their body language and eye contact during the empty spaces between words are brimming with subtext.

In one scene, the Girl invites Arash to her place after finding him, drug-addled in the street. She puts on a record whilst he spins a disco-ball hanging from her ceiling. Skilfully toying with the viewer’s expectations, the Girl turns to Arash, conflicted as whether to kill him in his vulnerable state, or to accept his affection. Playing out in an unbroken, three-minute take, she chooses the latter. The resulting image is genuinely sweet, full of yearning and ambivalence – all articulated without a single word of dialogue.

Amirpour proves herself a well-read, atmospheric director with meticulous attention to detail. A Girl Walks Home Alone At Night is a lovingly-crafted film of dream-like darkness and subtle human emotion, wearing its influences on its sleeve yet somehow entirely original. An instant classic. Colm Laverty

A Girl Walks Home Alone At Night runs from Friday, May 29 to Thursday, June 4 at Queen’s Film Theatre, Belfast.