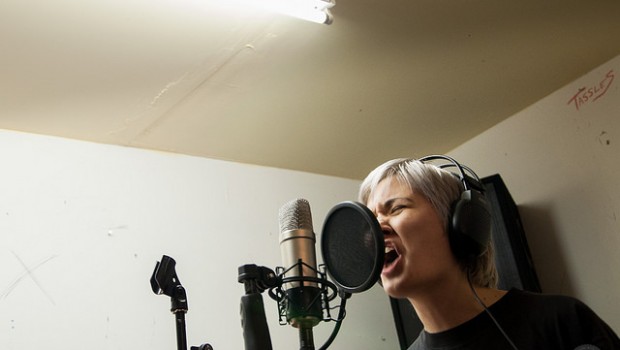 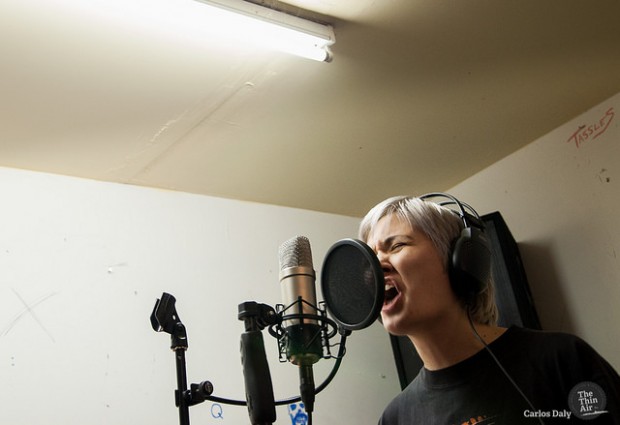 Ahead of its launch on at TenterHooks Gigspace on Sunday, June 28, we catch up with Dublin lo-fi three-piece band Sissy to discuss the writing and recording of their forthcoming 7″, as well as the reception to their music to date. Photos by Carlos Daly.

Hi guys. What’s been the general reaction to the first EP, and ‘Sail & Rail’ particularly, given the subject matter and events over the past year?

Leigh (Guitar/Vocals): ‘Sail and Rail’ has become our most popular song. The response to that has been tremendous. It feels like shouting about abortion, when there can be such a great silence about it in this country, excites people. Writing about a subject matter that so negatively affects the life of a female in this country, i.e. my life, is something so rudimentary that there is no reason in my mind that more bands shouldn’t be writing songs about this subject. The more that is done to bring this subject into the public spotlight and private conversations the better. Repeal the 8th.

Eoin (Drums): Very positive. I feel that people are really ready and motivated right now to hear voices and to make their voices heard over the cacophony of right-wing, regressive and patriarchal vomit being spewed out by the state, the media and the church. Satire really cuts through things and can be more affecting than a straight up or to the point song might be: “in satire, irony is militant”.

Michelle (Bass/Vocals): I think it’s also worth noting that the ‘Sail & Rail’ is also the place of emigration for many people. So many under the age of 40, who are able to vote in this country, are living abroad right now, which reflects in referendums and general elections. Immigrants who live in Ireland, even for years, don’t get a vote and don’t have the option of travelling for an abortion. With subjects like this it can get really disheartening and make you feel like nothing you do will change this country. Taking Enya’s song is an attempt to combine the positive aspects of Ireland (a mystical albeit cheesy culture, that we can’t help but love) and use it as the place to put everything you hate about this country into. 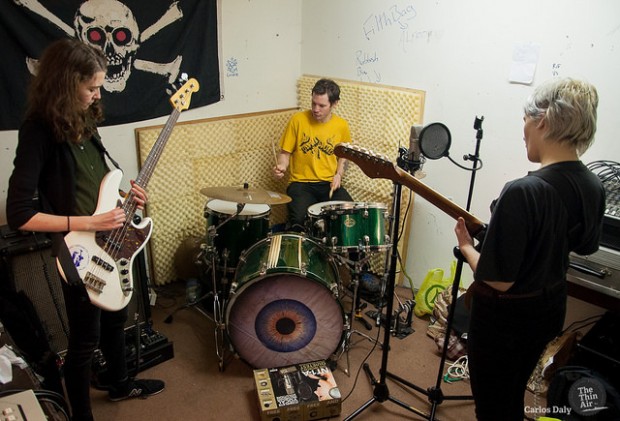 How has the music been received outside of Ireland?

Leigh: We did a few UK dates last year to mostly crowds who had never heard us before and the response was incredibly positive. Theres a strong sense of feminist support within the scenes we played. We met some amazing people like The Repossessed and Woolf who I’d love to play with again. I’d love to do a longer tour of the UK and Europe soon.

Michelle: It’s always great to get emails from people outside of Ireland who have come across our music through the internet, and then send them a cassette halfway across the world.

How has releasing the EP on cassette worked out?

Leigh: It’s worked out great for us. Some people see tapes as a hipster novelty item but it’s really just one of the cheaper ways for bands to put out physical copies of their music, which is always a nice thing to have. The majority of people will just be listening to your music online anyway so it’s nice to be able to have a designed physical output if people like what they hear and want to support the band.

Eoin: For me the only choice is between vinyl and tape. Who even buys CDs anymore? Having said that I don’t even own any tapes or vinyl any more, apart from a few of my own and friends band’s
releases, it’s really a choice of the cheapest format but to still have a physical artifact that people can buy to support us and to have something that has a presence in the world beyond the music.

Michelle: I love cassettes and I love an all-in-one track format. Our first release had a few samples on it, which is homage to a mixtape you would make for your friend or a mix someone would’ve played on a pirate radio. Probably not ideal for digital releases, but it’s a fun way of including the culture that surrounded your making of the music. 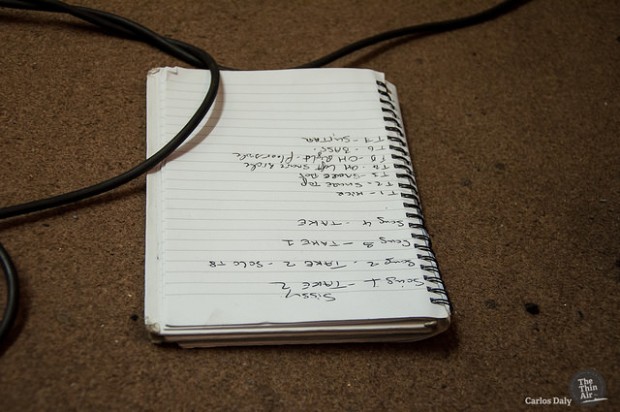 What can you tell us about the new 7”?

Michelle: Four more songs. One of them is a cover of a Blitz song ‘Attack’. The lyrics include “Freedom to fight/ Your freedom to choose”. It probably wasn’t a pro choice song to begin with but we’ve appropriated it into our repertoire. You can’t beat a catchy song.

Will it be available on any other formats?

Leigh: Yeah, of course. It’ll be available for digital download.

How do you find the recording process?

LEIGH: We recorded our first EP ourselves in our practice space. So it was rough and ready but we were excited to do it and get it out there. This time we recorded with our friend Robbie Brady of Exploding Eyes which was great. Not only is the recording quality a lot better but it was a lot less stressful for us on the day with him there to set things up. It’s good sometimes to have another person outside of the band there to help things go smoothly.

Eoin: We also mixed everything ourselves which was a nice learning process, lack of funds have dictated having more control over our sound.

Michelle: All you need is a zoom h4 and Reaper. And LOADS of patience. 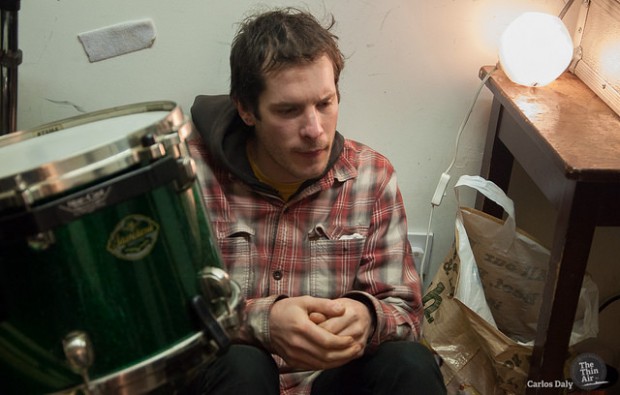 Is the 7″ a reflection of the band’s live sound?

Leigh: The songs on the new record have all been played live before recording so we were able to get a solid idea of how we wanted them to sound. We’ve just been together a year now so it’s nice to have time to flesh things out live. I want to play songs that I can get into and mean every word I say every time I play them, so playing live is one way to carve that out. The spontaneity of coming up with ideas when recording is definitely enjoyable too. That all keeps it interesting for me.

Eoin: As the recording process was as simple as playing through each song as we would live, it sounds as live as is possible, not that I’d have a problem straying away from a live sound, it’d be great in future to have time to work more fully on recording. It’s always a good challenge to flesh things out and add more depth but to try and retain the energy and passion of a live show.

What is the band’s writing process?

Leigh: I’ll usually write the basic song and record a demo or play it in practice for Michelle and Eoin and we’ll jam it. It varies on whether I have a fuller or more vague idea for it in my head. If me and Michelle are working on a riff and trying to figure out where we want to go with the lyrics, we can end up stopping to discuss the surrounding politics of a theme to figure out how we want to say what we’re trying to say instead. That’s really stimulating for me.

How do you find juggling/prioritising Sissy with other projects you are all involved in?

Leigh: It’s difficult having a 9-5 and the others in full time in college, but you’ll always find time for something you want to do. Every band in Dublin has members involved in so many different bands and projects that it’s fairly normal.

Eoin: It can be hard but we all try and make time for the projects we’re passionate about but also to maintain the commitment we have made to being in a band together, being committed to Sissy is fairly effortless as I feel that we have a very shared purpose; musically and politically. We also get along really well and have a similar low-brow sense of humour which helps.

Michelle: Haha, I would agree with that. It’s also good to have a consensus over what type of gigs we want to play. I like a mixture of DIY venues, bars, benefits, etc. I’d still love to play an all ages gig in Dublin because they were detrimental to how I got into punk. Juggling Sissy is going fine right now. We’re all committed to various things in Dublin for the next year and a half. I’m doing a MA in NCAD, where Eoin is also doing a BA in Paint. What’s good about being in NCAD is that engaging with critical theory and the Feminist Society has made me somewhat better at being able to articulate myself and to be much more aware with language. Along with that, I work as an English Language Teacher/Activity Leader in a school in Dublin. You might see me with thirty students on the street throughout the summer. So I do three things, all really haphazardly. 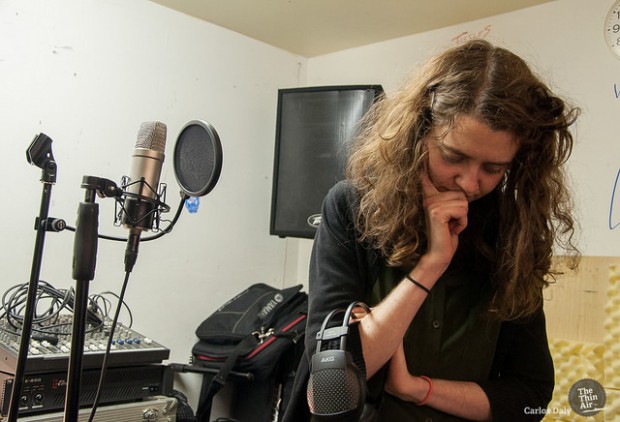 Is there anyone or anything that shapes your sound or direction in any way (inspirations musical and otherwise)?

Leigh: I generally listen to music thats new to me. I don’t always, or even usually, like what I listen to, but if one thing sticks out I’ll probably end up listening to that song 10 times in a row for the next few days. That can be tiring though so I also listen to bands I like too. Striving for a better future and removing the ever present social, cultural and political blockades to anything resembling equality in society motivates my songwriting. Its a learning process. My eyes are opened everyday.

Michelle: At our first ever jam we messed around with the Au Pairs song ‘It’s Obvious’. I feel like that was an important note to start off on, even if we don’t really sound like that. The Au Pairs are not just great musically but also in terms of how they combined a content which was challenging and important into tight rhythmic songs. I also like bands like Cocksparrer, Crass, Poison Idea, Circle Jerks, The Raincoats, Conflict, Zounds, Rudi, No Hope For the Kids, Putrefaction, Saccharine Trust, Runnin’ Riot and Abba.

Michelle: The most important thing is to just keep going. Practising, gigging and making music. This time last year I couldn’t play bass at all. I’m still incredibly bad at it, but I’m definitely better at it now. It’s just so important to actualise the stuff you plan in bands. It’s also good to challenge yourself as a musician. We have a cover on the upcoming Record Store Gay compilation which is a total U-Turn in terms of our sound! Also, a tuning pedal is the best thing you’ll ever buy if you haven’t a note in your head. Or else just get everyone to tune to your wonky key. As Mark E Smith says, “If you’re going to play it out of tune, then play it out of tune properly.”

Sissy launch their 7″ at TenterHooks Gigspace on Sunday, June 28 with Fierce Mild and Roslyn Steer. Go here for the show’s Facebook event page.

Tags: in the studio, Sissy, the record 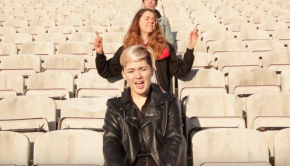 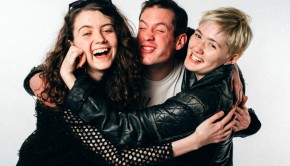 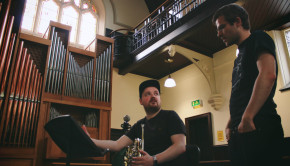 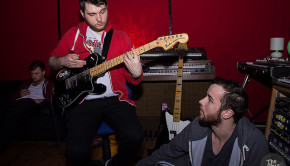