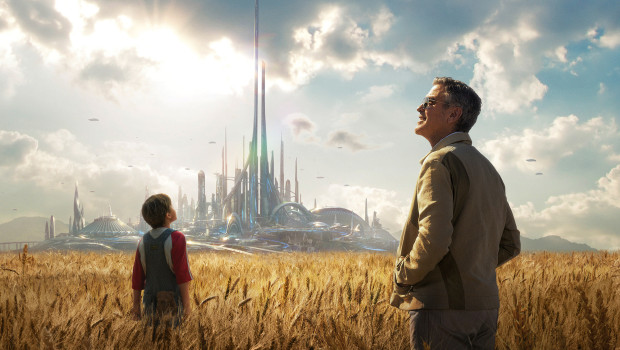 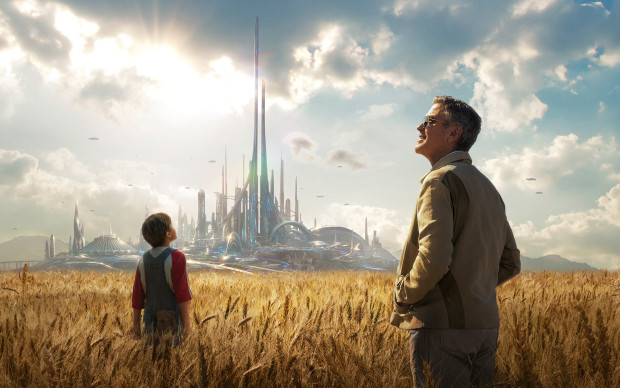 Brad Bird’s so-far stellar directorial efforts have shown an ability to draw on older forms and attitudes and render them with a fresh, impressive sense of movement and action. Humanist classic The Iron Giant’s story of small-town Americana resisting cold war hysteria was a hand-drawn animation released as the industry barreled towards computer generation. Later, The Incredibles told a superhero family drama in the style of old-glamour spy movies, laced with a critique of the modern world’s low horizons. Tomorrowland, channeling the futurist enthusiasm of Uncle Walt’s original theme park ride, is steeped in the golly-gee wonder of Bird’s Space Age youth, with its jetpacks and rocket ships and ‘reach for the stars’ evangelism. It’s also a colossally dull dud, an inert exercise in nostalgic preaching that marks the writer-director’s first major mis-step.  Like last year’s Interstellar, Tomorrowland’s message is a sympathetic endorsement of imagination and new ideas, of being creative and inventive and innovative. The film, though, is none of these things.

After an annoying stop-start voiceover, we’re at the 1964 World’s Fair in New York, as inventor wunderkid Frank presents his misfiring propulsion pack to a sniffy Hugh Laurie. Athena (Raffey Cassidy), an odd little girl with a British accent, presents him with a brightly coloured pin, and he follows her into a glimmering white Jetsons futopia. Fast forward to his modern equivalent Casey Newton (Britt Robsertson), daughter of a struggling NASA engineer, who runs into the same little girl and the same pin. Touching the token opens up the alternate world, layered over our own, the fun palimpsest interaction giving the film some of its brightest moments.

With some other-side blasty robots on their tail, Casey and Athena hitch up with an older, grizzlier Frank (George Clooney), now an inter-dimensional exile with a doomsday clock in his house (where there’s a fun fight with Portal-style wacky physics). Casey, as characters tell us over and over again, is super special and only she can save the world. Tomorrowland is filled with humanity’s best and brightest, but apparently they’ve just been dicking around for nearly half a century and it’s up to the teenage chosen one to fix paradise with her magical positive vibes.

It’s hard to know who to blame for Tomorrowland‘s pervasive problems (bad pacing, weird narrative evasions, awkward plotting). Maybe Disney didn’t want Brad taking risks with its shiny brand property, or maybe the director was too huffed up on sugary optimism to do proper graft on story and character. The presence of Damon Lindelof, Brad’s co-writer, probably didn’t help either, with his record of front-loading stories with teasing mysteries that don’t pay off (Lost, Prometheus). It’s a lot of rushing around and ‘there’s no time to explain!’ dialogue, capped off with a finale that manages to be both over-complicated and stunningly literal (they basically destroy a Bad Thoughts Machine). Childish rather than childlike, but with a running time that will challenge the little ones, Tomorrowland has the toneless, frictionless chirpiness of one of its animatronic baddies. A grinning thumbs-up with nothing behind the eyes. Conor Smyth